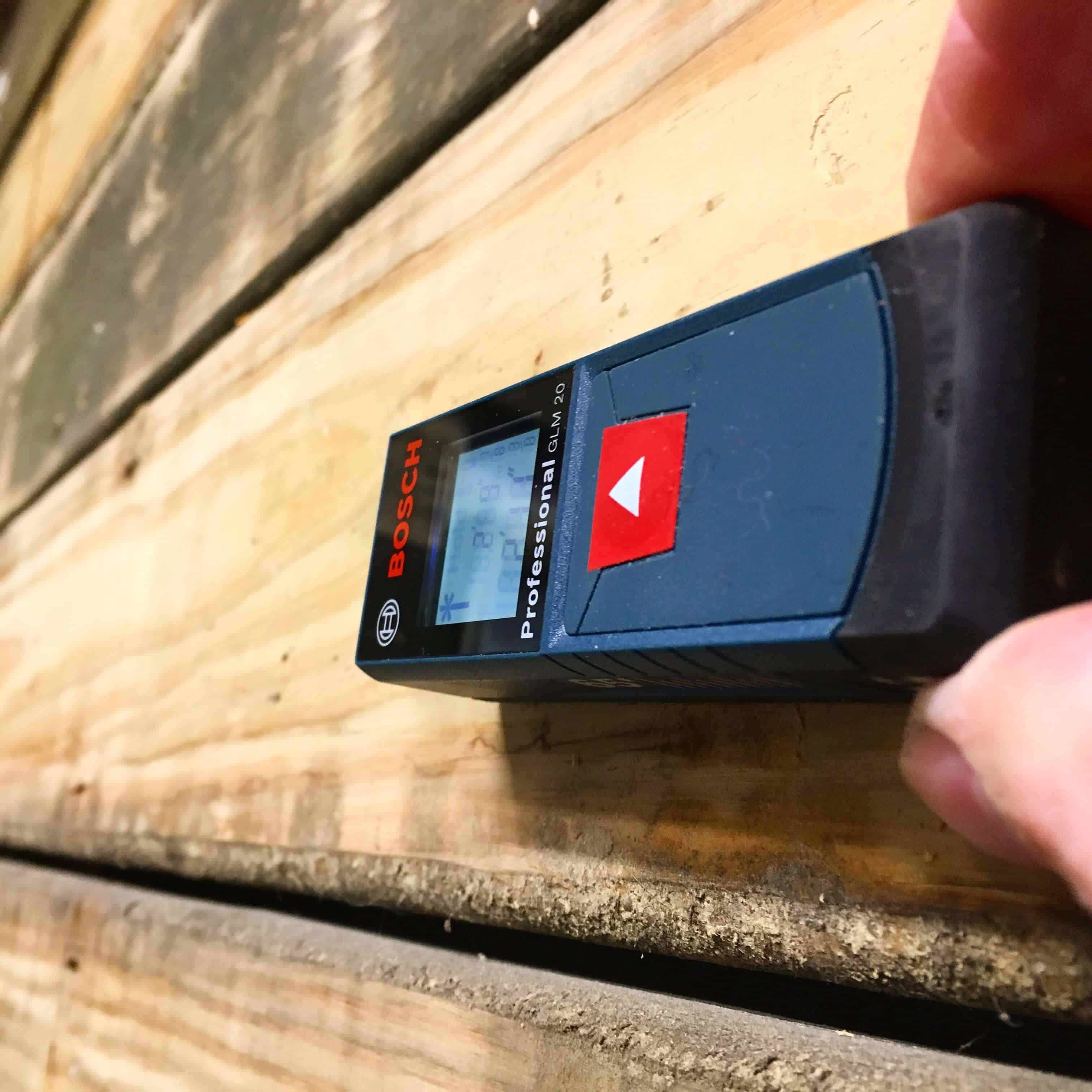 IT’S ALIVE!  No legitimately, I have a living breathing workshop now.  Well, at a minimum I have legitimate electricity.  So I guess that makes my Frankenstein reference a little backwards because I’m no longer parting out random pieces to power my workshop (what’s wrong with 5 extension cords plugged to one outlet?).  No, I hired a real electrician and had things installed correctly because DIY electrical just doesn’t bode well in my running count of “days without incident”.  So with essentially everything (but the massive Husky Tool Cabinet) pulled out of my shop, it was time to finish my shop and test out a few new toys from The Home Depot Pro-Spective Tool Review. 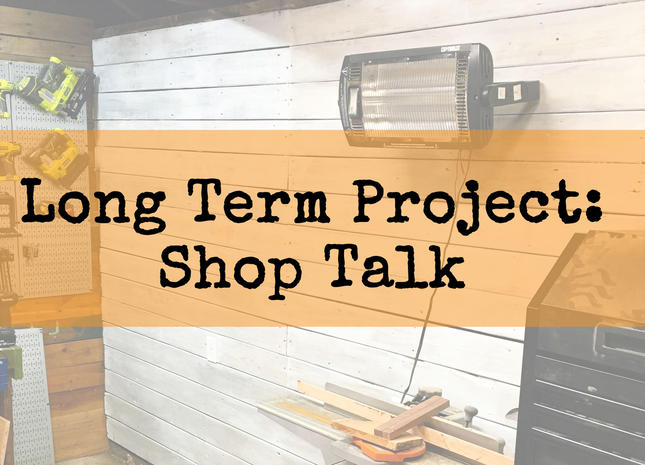 Much to the chagrin of my neighbors and probably my wife, I’ve been storing all the decking planks I salvaged from the deck I tore out a few months ago.  Pressure treated 12 footers have a lot of practical applications, but once I installed R-7.5 Foamular Foam Boards and Great Stuff spray foam (*affiliate links) in between the exposed studs of the shop walls (for insulation), the planks started getting installed as a durable wall that had a great rustic look.  So why not use traditional cotton candy insulation in the shop?  For one, I’m never sure exactly how leak proof the old shop is and wet insulation isn’t great.  On top of that, the last thing I need is a rodent to make a nest in the pink stuff behind a wall.  So foam board it is!  The install process for the planks was simple, but a pain.  Measure the distance (because 70+ year old shops aren’t square) needed for each plank, go outside, grab a plank from the stack, cut it to length, sand off the top layer of grime and then attach it to the exposed studs with screws. 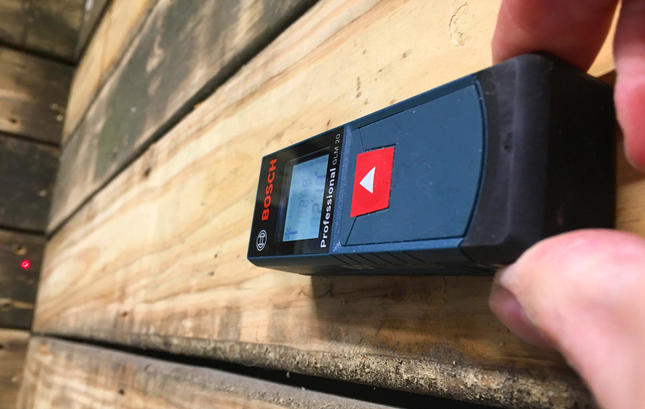 This gave me a perfect opportunity to try out the Bosch GLM 20 Laser Measure (*affiliate link).  For under $40 you can measure up to 65 feet with the press of a button.  I was talking to a contractor at my local Home Depot during the holidays and he said he’s been buying this base model up like crazy for his crew.  It’s extremely accurate and you don’t need to fiddle with a tape measure with embarrassing “stand out” issues while trying to get exact measurements.  I wasn’t running one board the entire length of the shop, I was cutting various lengths for a mismatch install effect.  I very easily used this little Bosch unit by orienting it on a stud and aiming the laser at the butt of my last plank.  With my measurement in hand I could then cut a new plank and comeback for a quick install.  When I installed my first pallet wood wall on the back of my workshop something funny (but predictable now that I know better) happened, the difference in the widths of the random pieces of material began to compound.  What should have been a focal piece for my videos now had a rising and falling line in each row that made installing something like my pegboards a chore because even though a traditional level said my pegboards looked good, against a crooked pallet wood wall they had the appearance of being installed by a one eyed, peg legged drunkard.  Yes, that sounds an awful lot like a pirate, but I assure you, the analogy works. 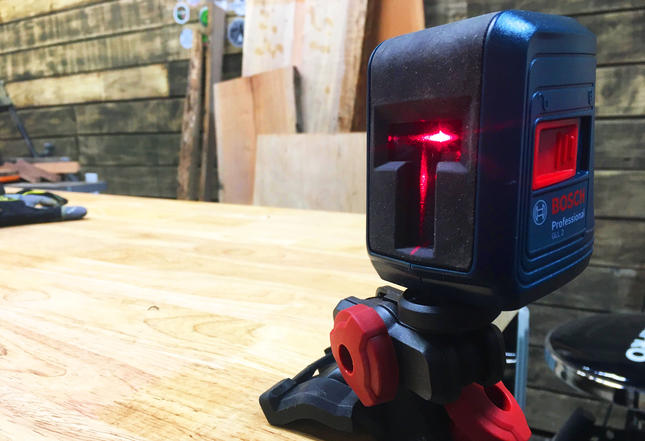 This time I decided to be smart and fired up the Bosch GLL 2 Self Leveling Cross-Line Laser Level (*affiliate link).  Yes, I had dueling Bosch lasers and I didn’t even make a stereotypical “pewww pewww pewww” laser noise once.  While most laser levels will run you several hundred dollars for market entry, this one comes in at under a hundred dollars.  With the adjustable clamping system, I could attach the Bosch to the other side of the room and then use the self-leveling function to check my install line to make sure I wasn’t skewing my rows.  The red laser line is clearly visible and can run up to 30 feet.  What’s also a plus is that as I progressed down the wall, the cross-line allowed me to easily mark my stud for an even quicker install of the planks.  Originally I had tacked my planks up with a nail gun and added additional support with a few wood screws… well I quickly realized what a pain in the butt that was once I had to remove a couple of planks for wiring.  I had been using the Milwaukee m18 Brushless Impact Driver I reviewed a few weeks ago for most of the heavy lifting with my all-time favorite Shockwave (impact rated) bits also from Milwaukee.  You’re crazy if you haven’t switched over to those yet. 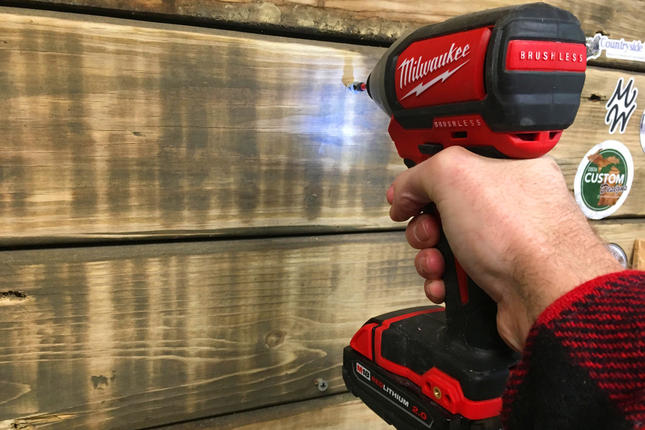 While prepping the shop for electricity, I pre-drilled multiple holes for wiring to go through, or most importantly… hidden wiring for my shop TV (priorities people).  For this I used Diablo’s Bi-Metal & Carbide Hole Saw Set (*affiliate link).  You get five hole saws from 2″ down to 3/4″ that easily swap out and make it easy to pop the plug out. 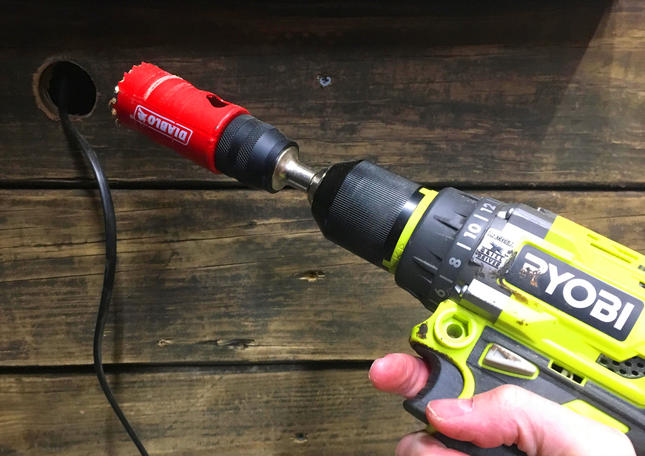 I ran into a slight problem though when putting the planks up near the newly installed electrical sockets… the receptacle boxes were attached to the studs but were inset even with the face of the stud… that I was installing 1x planking on top of.  That means even if I carefully measured where each box was located and painstakingly cut out a hole using my Ryobi One+ Jig Saw (*affiliate link), the box would still be inset too far to attach the faceplate.  I physically face palmed myself when I went to attach the plate to my first socket. 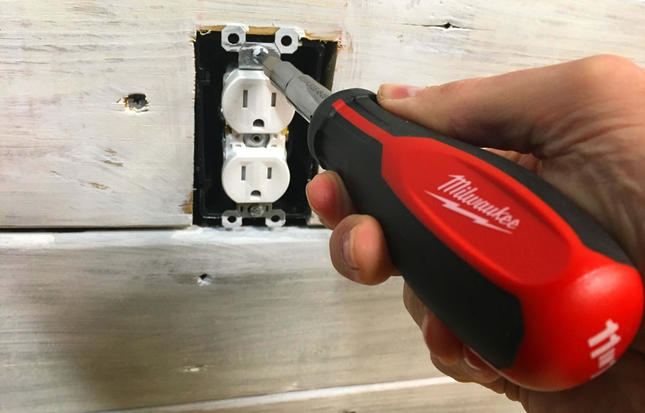 So what did this mean?  I had to turn off the power to those sockets, use the trusty Milwaukee 11-in-1 Multi Tip Screwdriver (*affiliate links) to disassemble each receptacle and (rather than sit in the dark) fired up my RIDGID GEN5X Light Cannon (it’s called a light cannon, how could it not be bright?) so I could physically bump each socket out about an inch each. 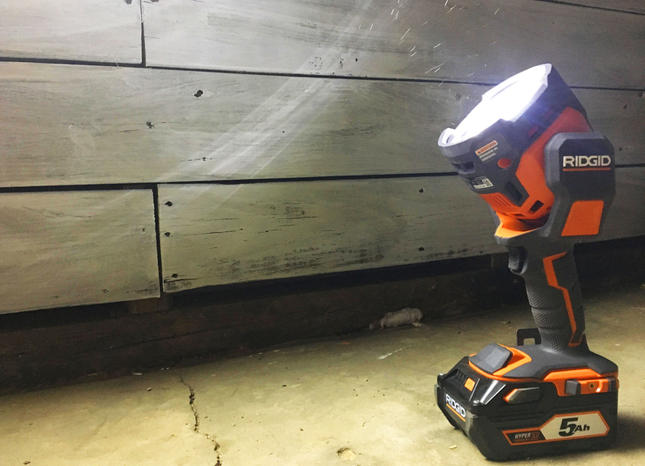 With the shop walls insulated and the walls up I had a realization… the exterior door was still a cardboard interior door you big dummy (that came with the garage)!  Not only could you push your way through to rob the place by accidentally leaning against the water logged door… but it definitely was not insulated.  So I picked up an energy star rated 6-Panel Steel Door (*affiliate link) for under $100 and ripped old soggy off its hinges. 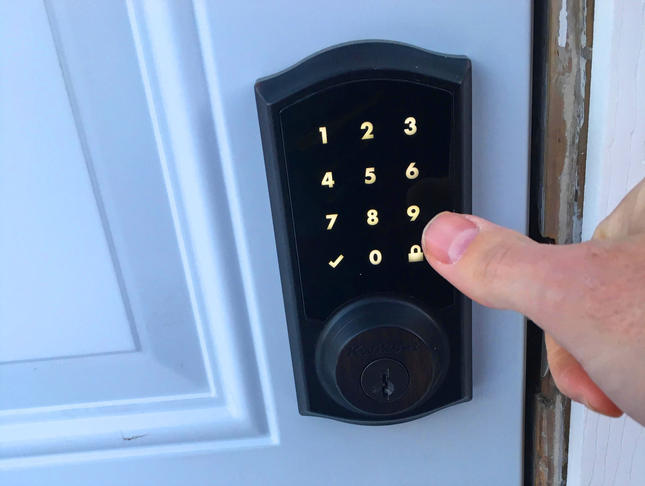 In order to get my hinges to fit in the existing frame I pulled out my Ryobi One+ Trim Router (with a downward spiral bit) and cut a few quick insets on the door and then it fit like a glove. 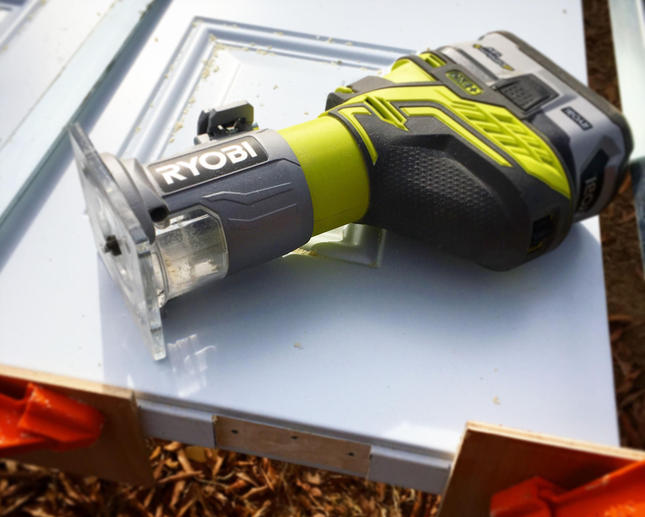 I also happened to have a Kwikset SmartCode 915 Touchscreen Deadbolt (*affiliate link) just sitting around my shop that I picked up at Haven a while back.  So within a few minutes I brushed off all the layers of sawdust, installed the deadbolt and then my dilapidated little shop suddenly felt almost legit and finished. So what’s next?  The walls again!  I had another slight problem that I (once again) didn’t anticipate… my dark little shop got even darker with the plank walls up (even after I daisy chained more LED Shop Lights).  It looks nice and manly, but it was terrible for video footage.  So after taking an Instagram vote, I white-washed the (longer) side walls to help reflect light. 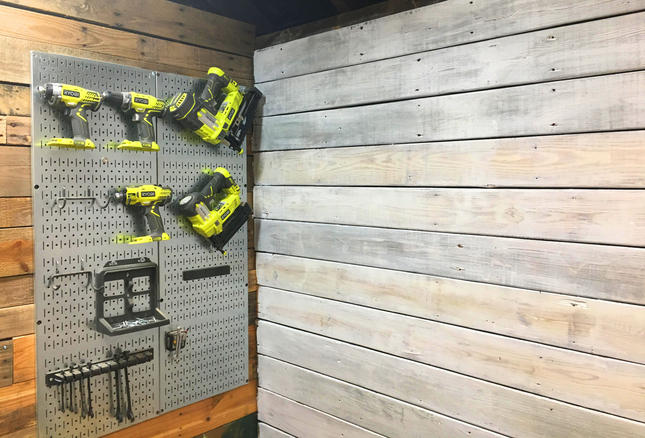 For a cheap and easy way to white wash, I grabbed a gallon of Kilz Primer (*affiliate link), a mixing bucket, added water, stirred and applied a thin coat of the mixture with a cheap paint brush.  I then took a few rags and wiped off the excess before the mixture dried.  Done.  It immediately made a huge difference.   So what’s next for the shop?  Furniture (like workbenches and saw stands, not couches & recliners) and tool organization!  We’ll get to that in the next long term post…

*This post has been sponsored by The Home Depot Pro-Spective Tool Review Program.  I have been compensated for my time and opinion on these tools. Now someone go tell my sister that my opinion IS apparently worth something.