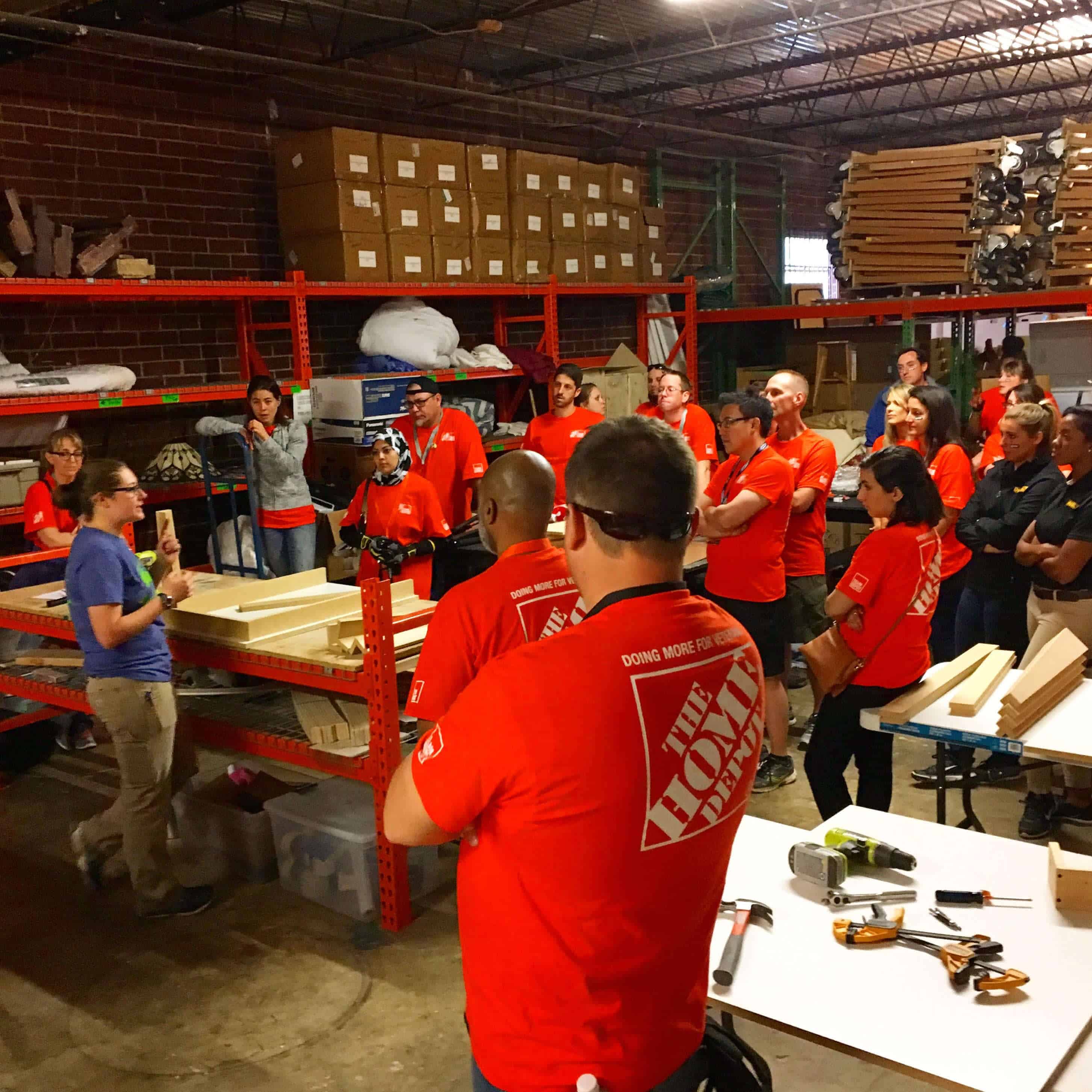 I casually mentioned on the website a while back that I was going to be partnering with The Home Depot (I’m kind of a big deal… only because I’m freakishly taller than everyone here) for their Pro-Spective series, but never really jumped into it.  Mainly because other than reviewing tools I wasn’t really sure what I’d be getting in to.  Now that I’m here I’m ready to share all of my dirty secrets each day of this trip.  So check back and I’ll have updates a few times this week.

But first… let’s talk about Uber… I’ve never Uber’ed (is that a verb?) before.  That was our recommended means of transportation from the airport to the hotel and I obviously failed.  I fired up my Uber app and plugged in my destination and sat there for a good 10 minutes when I realized my driver didn’t seem to be moving on the map.  I asked a couple of 20 somethings what I was doing wrong and they informed me I never actually ordered a car.  Whoops.  So then they kindly ordered me an XL vehicle because I’m tall.  So I got picked up curbside by a suburban.  Street cred instantly went up.

Day 1: It’s Not A Corporate Office!

The first leg of this amazing trip saw us shuttled over to the Home Depot Store Support Center.  Don’t you dare call it the corporate or home office.  That diminishes what it is.  Not to mention it has a full sized fully staffed Starbucks inside.  Our tour got derailed for a coffee break… but sadly no one took the plunge and ordered the new “unicorn” drink.  Pansies.

I guess I should mention what sort of people are involved with this event.  A lot of bloggers, but then media, tool companies and then some seriously important industry influencers.  It’s fun when you’re sitting on the bus ride over with Brad from Fix This Build That, Ben Uyeda from Home-Made Modern across the isle, the senior editor from Family Handyman in front of you and then what do you know, April Wilkerson from Wilker-Dos turns around and asks about your workshop.  It’s a who’s who of DIY which makes me laugh knowing I’m involved.  Aside from being the tallest person here, it’s been odd to find out that I’m also one of the older bloggers here.  People are shocked to find out i’m in my mid 30’s.  I assure them it has nothing to do with my healthy habits and everything to do with my immaturity.

Where Tools Go To Die

Aside from the facility tour and a walk through their onsite museum, what you guys really want to know about it their quality testing facility.  This was a big deal because they generally don’t let people into this section, nevertheless media.  They were demo’ing their in house Husky Brand for us this visit which gave me a new found respect for their products.  Because this area is all about breaking stuff.

The first test we saw was everyone’s favorite mainly because it scared the crap out of the unsuspecting observers and made men jump, women yell and babies actually cry (for real… Amy from Her Tool Belt had her new little one there in a kangaroo pouch). 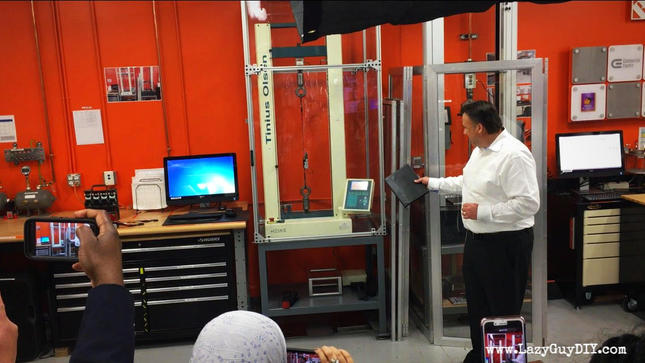 They took a 500 lbs. rated crank down strap and had a machine pull on it until failure.  500 pound rated should fail at like 500 right? Wrong.  Try 1600 pounds!  When it goes… it goes a lot like my 2 year daughter when it’s nap time and she’s turning into a pumpkin… and that’s not what you’d call quietly.

They showed us the same failure tests for their tool carts and wrenches and if you’d ever question how sturdy one of the Husky tool chests is, it will hold up two Corvettes before it starts to crinkle a little.  Not that you need to go around stacking Corvettes in your shop.  That’s not really real world applicable. 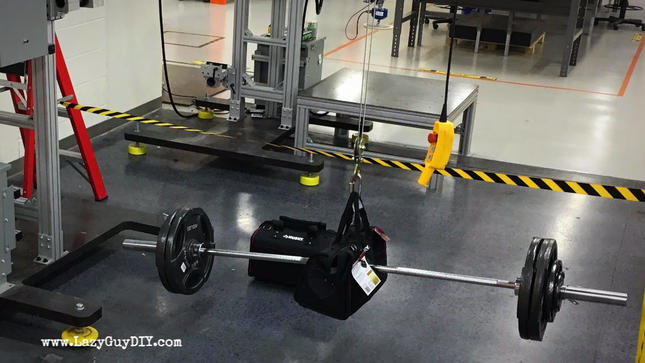 One of the next fun areas was showing the strength of the Husky brand tool bags.  The picture above is a strength test demonstrating the handles of a small bag easily holding up to 200 lbs.  They had to back the weight off so they didn’t accidentally injure the VIPs, but the Pro Series bags hold up to around an actual ton before failure.  As the guy said… you will reach your physical limits before the bags do. 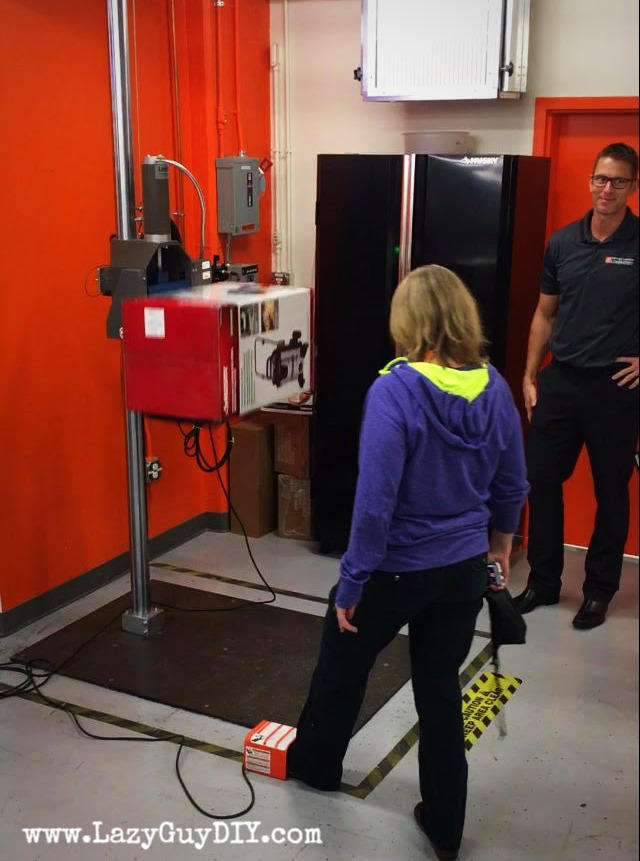 There were a bunch of other fun tests like weathering screwdrivers, dropping packed boxes repeatedly to see how the product held up and then everyone’s favorite Festivus test, the feats of strength, but no one wanted to give that one a go or air their grievances.  As for the weathering of tools like screwdrivers, I recently found a Husky straight slot screwdriver I left in my backyard for the last year and a half… once I brushed the dirt off it was good as new.

This was just day one and I really slacked on the pictures.  Check out day two to see all of the tools!