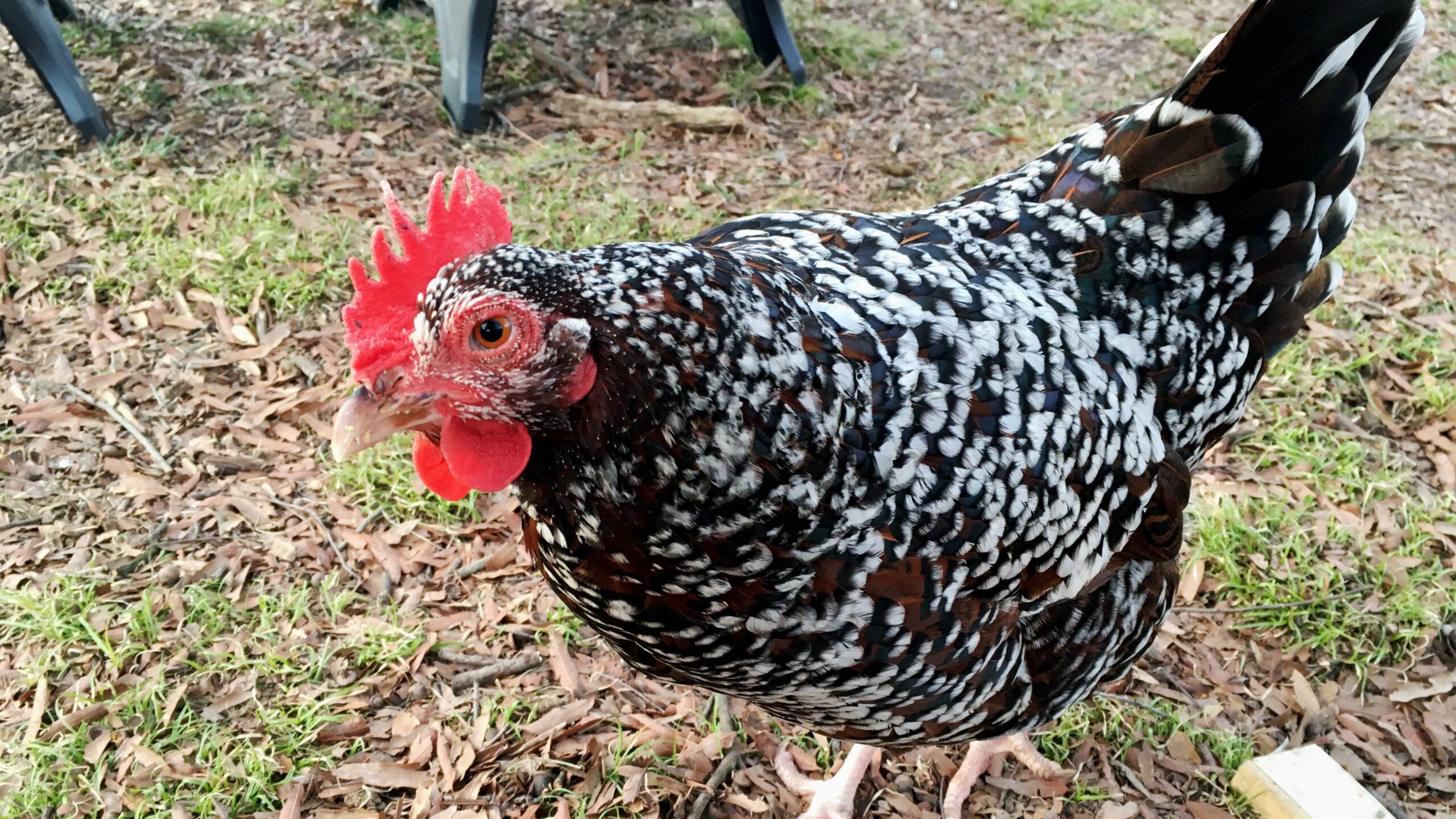 It’s funny because Chicken Coops and Backyard Chickens were the topic that initially got me into blogging. We were going to have our first kid and my wife promised me a new Xbox if I built a chicken coop before our daughter arrived. Our flock of chickens have come and gone and the coop is now outdoor storage, but with people stuck at home, I’m getting questions about chickens on the daily. So let’s talk Backyard Chicken Basics.

First thing to know is that you need to make sure your municipality allows chickens. Unless you live in BFE (is that still appropriate?), there are rules and sometimes applications to start a flock. Make sure it’s legal first. But then take in account where you live and what average temperatures are like in the summer and winter times. Certain breeds are considered cold hearty and are great for those rough winters.

In Central Virginia, we ordered (yes ordered), two Speckled Sussex and two Barred Rock hens. I said hens. Do not, under any circumstances get a rooster. If you get one by accident… throw it back. Unless you want more chickens. Or a territorial bird. I did say ordered, because our chickens came next day mail from a hatchery in Ohio. We picked the Speckled Sussex and the Barred Rocks because my wife “wanted a chicken she could hug”. Sure enough… these were huggable chickens we named Eenie, Meanie, Miny and Moe.

You can buy a chicken coop online for under $200… and then it will fall apart after your first big rain. Don’t be cheap, I bet you paid more than that for your sleep number bed for your dog. Plus, if you’re stuck at home, build your own coop with all this free time. Just remember when designing your coop you need to keep several basics in mind:

The rule of thumb is your coop needs 2-3 square feet per bird on the inside and then 8-10 square feet per bird in the run. What’s a run? We’ll get there. On the inside you need to have one nesting box per two birds. The nesting space needs to be cozy, safe and private. A lot of people actually put little curtains in front to give a sense of security. Another thing to keep in mind… you need easy access from the outside. I had easy open doors on the backside of my nesting boxes so I could collect eggs each day and not disturb the ladies. Chickens will ultimately lay eggs wherever they feel like it, especially if you let them out in your yard. We had times where we’d find stashes of like 20 eggs under bushes and steps… which probably aren’t safe to eat anymore. You can train your hens by using fake eggs in their nesting boxes as a road map where to plop on down.

The also need perches that are easy to get onto and sleep on at night. For our perches I cut branches at were an inch to three inches thick and mounted them about a foot from the wall. What’s important is that your chicken can get traction, so don’t use smooth dowels or plain boards unless you add texture. Each perch should have enough room for at least two birds as they’ll huddle together for warmth in cold nights.

So what’s a run? It’s the space where the chickens spend their day outside of the coop. As mentioned above, they need 8-10 square feet per bird. The good news is that space can also vertical if you build ramps, perches and other fun things to interact with. Oh, and chickens need to be entertained. They love mirrors, swings (yes swings), multi-tiered perches and food puzzles. Bored chickens have health issues and often turn their boredom towards injuring each other.

In the run you’ll want their sources of food and water (more on that in a minute). Plus you’ll also need a dirt/dust bath. Yes, like a chinchilla. Chickens need a dry patch of silty, dry dirt to roll in. It helps regulate the oils on their skin, keep down on bugs and lice and entertains them.

I actually planted vertical planters on the outside of our chicken run. It allowed edible snacks to grow just in reach of a snack. But also they were protected enough not to be eaten down to a the root. Chickens… eat… everything.

Think living in the city means you’re exempt from predator problems with your chickens? Wrong! We live smack in the city and still lost two chickens to predators. Raccoons, possums, coyotes, foxes, cats, dogs and even hawks are constantly testing your defenses. While locked in your coop at night, raccoons are your biggest urban enemy. Allegedly, they can shred right through cheap chicken wire to get to their meal ticket. You can upgrade to hardware cloth, but we never had a chicken wire breach.

But what about death from above? Hawks are something I never accounted for… I didn’t consider an aerial defense… but I should have. We let our chickens out during the day in our fenced in yard and multiple times a day our birds got dive bombed. As long as you have some ground cover like shrubs or patio furniture, they’ll be mostly safe. But this also means you can’t have an open air run or your flock will get rocked.

We picked up normal chicken feed from our local Tractor Supply Co or Southern States, you can order the same online. Our birds hated the pellets and loved the crumbles, just give each a try. Just remember you need to also mix in some chicken grit or crushed oyster shells. Those will help strengthen your egg shells and add to the health of your birds. Just like human babies, chicks need specific food as well.

With food out, especially if you share kitchen scraps… you’ll invite unwanted guests. Mainly squirrels, wild birds, mice and… rats. Yes rats. City rats are already the size of a Jack Russel so the last thing you want to do is feed them more with a typical coop feeder. They’ll bring disease and more to your flock. So we picked up the Rat Proof Chicken Treadle Feeder that took only about a day to train the chickens on and got rid of the rats in a few weeks. Your birds need to be fully grown though, but it’s a life saver, watch the video below!

For water the last thing you want is to set the poultry drinker on the ground. They’ll fill it with dirt and poop in it all day long. So I just suspended mine a few inches off the ground. At one point I had built an automatic waterer that ran through a cooler, down clear tubing and into a PVC pipe with saddle style chicken nipples (yes… I said chicken nipples). While it solved the issue of dirty water on the ground, it froze during the winters and grew mold during the summers. Basic is best. Until the cold comes…

If temperatures drop below freezing in your area, you’re going to need to account for it. There’s a difference between mild cold and subzero cold though. If high 20’s and low 30’s are as cold as it gets then your appropriately sized coop and room to huddle will be warm enough for your birds. Just make sure it’s sheltered from the elements and has a little air flow to avoid moisture build up. For when temperatures dropped really low, I mounted a basic clamp light into the rafters with a heat lamp bulb. I should mention this is obviously a fire hazard, so mount it smartly and out of reach of where the birds can flap into it.

To solve the issue of just letting the heat lamp run, I added a thermostatically controlled outlet. It sounds fancy, but for $10 it’s a plug that automatically turns on and off at specific temperatures. The one I used turned on if the temps dropped below 35 degrees and off again at 45. So not only was the heat lamp hooked up, but so was a heated water bowl for inside the coop. Chickens drink more when it’s colder and if your temperatures are below freezing, their water will freeze through. Paired with the outlet, I had a fully automated cold proof coop.

We loved our chickens while we had them. They were fun to interact with. They provided fertilizer for backyard gardening and composting. We also loved having fresh eggs. Ultimately, we decided not to get more after our last hen died. They’re actually lower maintenance than cats or dogs once you get them set up. So if you have other pets they just go into the routine.

It was a fun experience and something we’re happy our daughter got to experience as well and maybe something we’ll revisit in the future. You can read a few more of my original posts here about our experience with chicks in the basement and even egg keeping 101. If you’re on the fence, it’s a very rewarding experience, but it takes a lot of prep and oh yeah… healthy chickens live 7 years or more… so… take that into consideration.