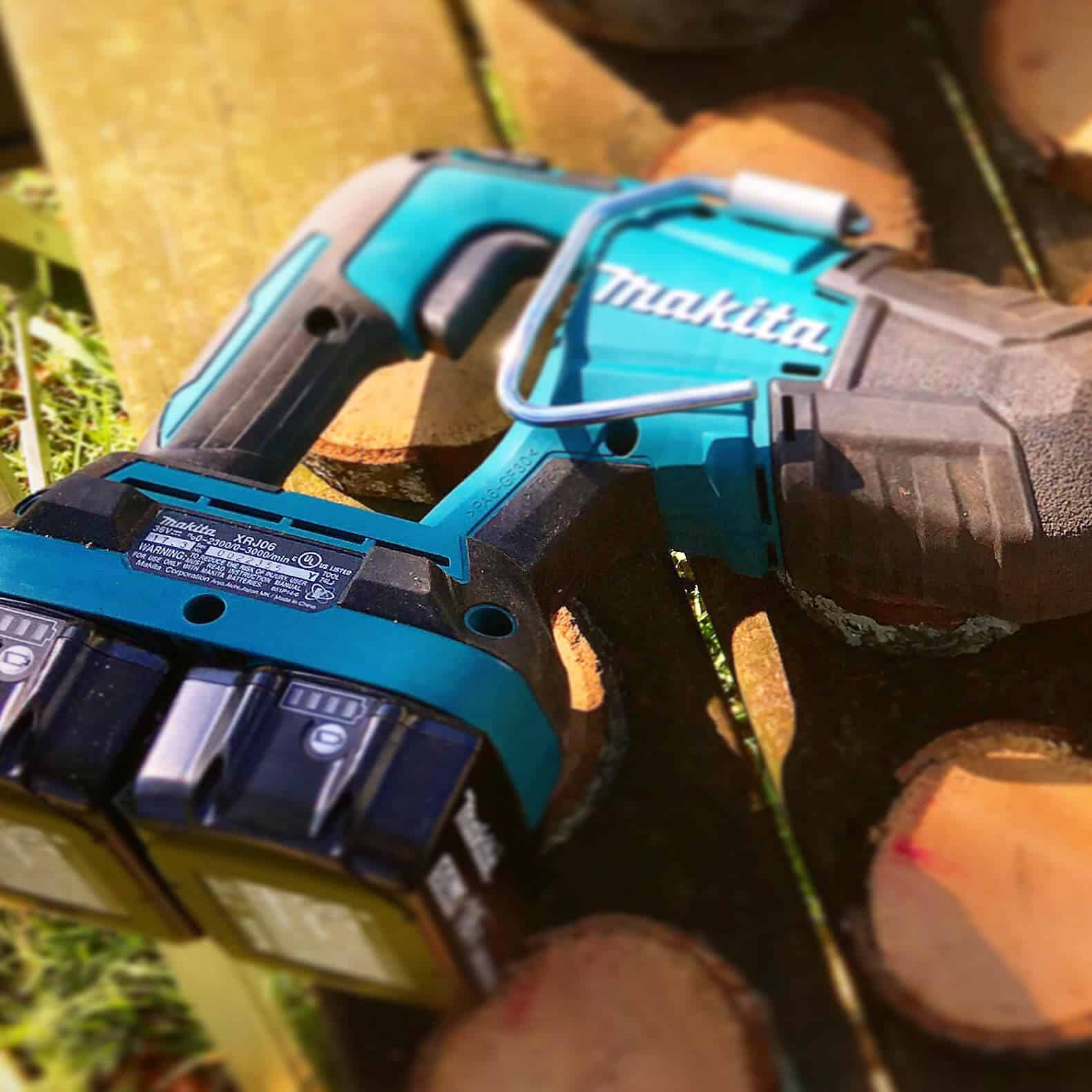 There are exciting things happening with Makita’s new 36v platform right now.  A few months ago I got to try out the X2 LXT 36v Rear Handle Circular Saw (XSR01Z) (*affiliate link)  and immediately knew I was gripping my fingers around what the industry is quickly calling one of the best circular saws ever made.   Unfortunately, the Makita reps pried the saw from my hands when I got so excited I tried to cut their display booth in half with it.  So now I shed a tear every time I walk by the saw at my local Home Depot reminiscing on the memories we made (we’ll always have Atlanta…)

Flash forward a few months and I fell in love again with another Makita X2 Saw.  This time it’s the X2 LXT Reciprocating Saw (XRJ06Z) (*affiliate link) .  Pull the trigger of this Makita and you’re in for a thrill of pure unadulterated demolition and destruction.  Try to hold back a smile.  I dare you. 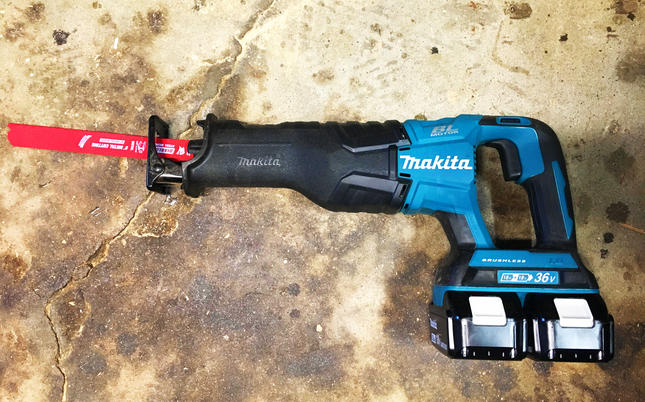 The X2 on this platform means you’re carrying two 18v batteries packed in side by side that combine for 36v of power.  There are few things in this world that this saw will not be able to cut through.  The extra battery power and a brushless motor are the equivalent of having a Prius Hybrid Monster Truck.  You’re going to be able to do some very serious damage and have enough juice to bring the pain for a very long time (without the reservations of driving a Prius). 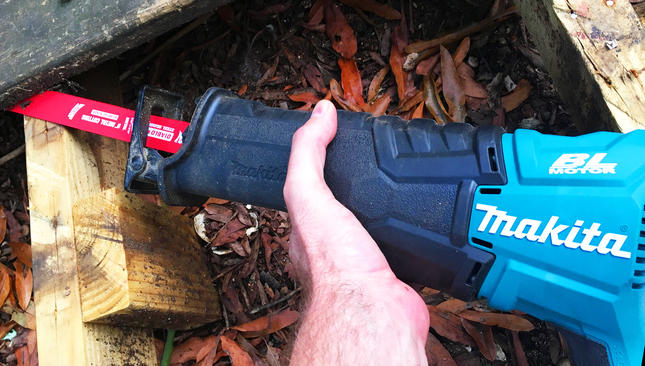 So how do you put a saw this powerful to the test?  I had just the job for it.  Over the last few weeks I’ve been demoing my back porch (still!) that should be featured on a DIY Nightmares TV show for how poorly it was constructed.  Because I’m not one to pass up lumber I could repurpose, rather than just cutting and smashing all the boards I’ve opted to cut as many decking screws as I can with a reciprocating saw and salvaging the decking boards for another project.  Decking screws that are embedded so deep into a board you can’t back them out with the best impact driver are no bueno.

The Makita Reciprocating Saw In Action

While doing my careful demo I killed my lone corded reciprocating saw that I’ve had for years that I kept around for the tough jobs and then burned out another (less than a year old!) model from a well-respected tool company.  So if you’re keeping count that’s Deck – 2, Recipro Saws – 0.  So I grabbed the new Makita Recipro saw, popped in a fresh Diablo Steel Tipped Carbide Metal Cutting blade (*affiliate link) (with tool-less blade changing) and starting slicing through screws like bad guy fodder in a 70’s Kung Fu movie.

It was a blood bath.  Not in a bad way like I was waving my saw around carelessly and lost a few phalanges, more like a day of reckoning had come for those decking screws. The Makita came, saw (literally!), conquered and barely broke a sweat having only spent a bar of battery on each pack.  But why stop there? 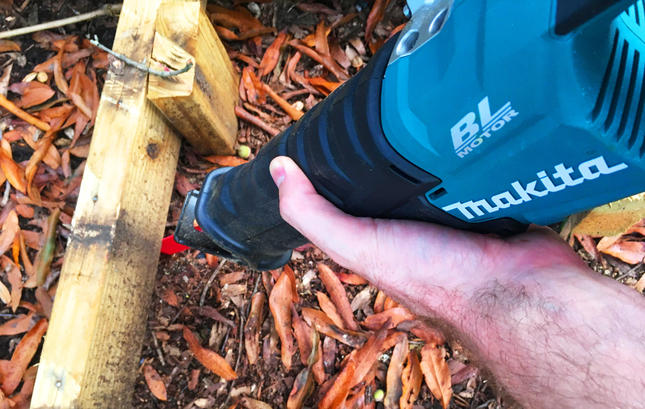 Not Just Demo Work For This Saw

Tired of me mentioning how the biggest tree in the neighborhood looms over our house (and both neighbors’ houses)?  Too bad!  Well this past weekend a limb as thick as a normal tree fell on my fence in the middle of the night.  Did I grab a chainsaw to cut it up the next morning?  Heck no!  I grabbed two batteries and the Makita X2 LXT Recipro and this time popped in Diablo’s Carbide Pruning Blades (*affiliate link) .  Within minutes I had nice firewood sized pieces of lumber cut and stacked, so I then started showing off.

These limbs were the perfect width for making coasters… Christmas presents anyone (Assuming I can get them dried out fast enough)?    Oak of any kind is a dense cut and gets tough for most blades and tools to run through.  The Willow Oak limb put up little to no resistance in this test.  Sharp blades and a powerful saw will win most of these battles. 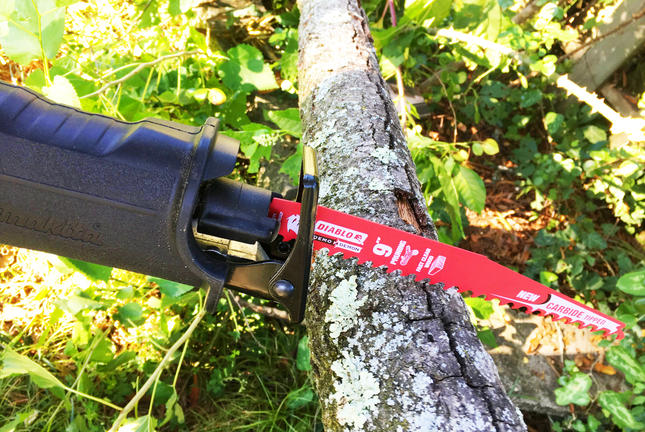 So what’s the downside?  Honestly, the performance is so strong with this saw that the only fault is how heavy the whole unit gets with two batteries attached to it.  But I don’t even fault it there.  The added weight helps stabilize the saw and gives you a more authoritative stroke through your material.  At a little over 12 lbs. with batteries attached the saw outweighs most of its closest competitors but I barely noticed because I wasn’t struggling to make cuts like I was with the other saws.  I say if you find the weight of this saw a downside then it’s time to hit the gym bro. 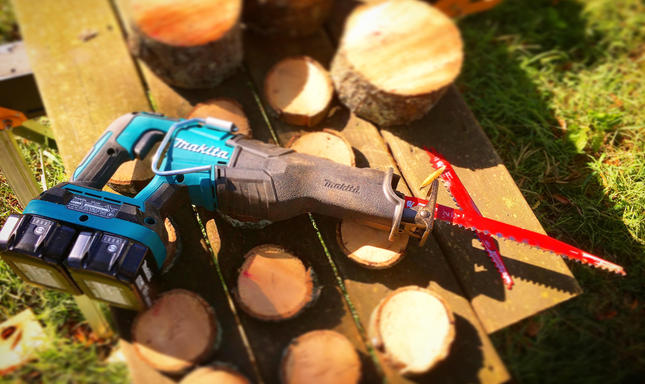 The Makita X2 LXT Reciprocating Saw (tool only) currently retails at The Home Depot for $195.71.  Need something a little smaller?  You can get the X2’s little brother for half the weight and the same price with the Makita 18v LXT Brushless Reciprocating Saw as well (check out Jaime’s review from That’s My Letter).

*This review is part of The Home Depot’s Pro-Spective Tool Review program.  I have been compensated for my time and provided with product in exchange for my opinion on this tool and accessories.  My opinion is my own, but you’ll share my opinion when you fire this bad boy up.