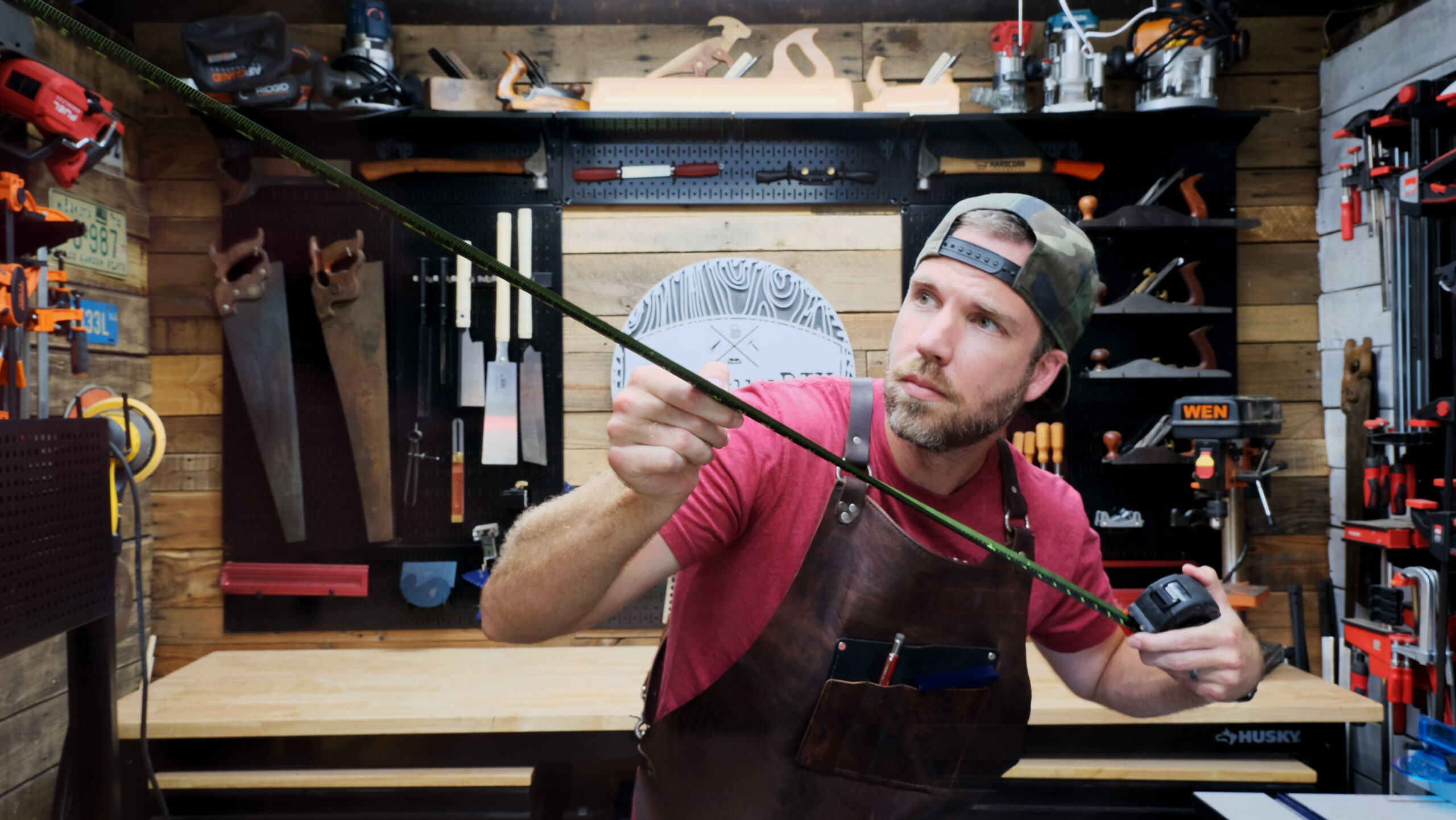 I joke about it often, but in all seriousness I have a tiny shop problem. I run my business out of a 10’x16′ detached garage that has gone from a scary, rat infested eyesore to a highly efficient inner sanctum. While most dad’s dream of turning a space like this into a man cave to watch the game, I saw an opportunity to build a custom wood shop that’s my place of zen (and still have a TV). So how does a small shop with big ideas stay productive? Storage, planning and personality. Here are a few of my favorites updates and how we got there…

*This post has been sponsored by Extra Space Storage. I have a lot of stuff… Sometimes I need my space, your space and maybe a clean and secured, climate controlled rented space too. Want to see how more people turn their spaces into a man cave, check out more from Extra Space Storage!

My shop originally started out with just decades old corrugated metal walls, exposed timber frame and not a single light bulb. You know… the type of place nightmares are made of.

With all the clutter removed (or shoved into one corner at a time) I started to add foam board insulation in between the framework. Because I was going to be operating loud machinery in my shop, not only did this dull the sound (going out and echoing inside), it obviously helped with the extreme heat and cold during the season changes. With the insulation in place, I debated leaving the purple foam walls exposed but knew ultimately purple wasn’t my color. So I started searching the alleys and looking behind local businesses for tossed pallets. Sure enough… they’re everywhere! Eight to ten pallets later and I installed my first feature pallet wall on the back wall of my shop which lead to the inspiration for the rest of my space.

The thing about pallet walls is they require a wall or a sheet of plywood behind them to tack the boards to… I wasn’t ready for that kind of commitment yet and it seemed like a lot of effort for a channel called Lazy Guy DIY. So I called an electrician and had them run electrical wiring to my shop and then set me up with power on three of my four walls. Previously, I was powering my shop with two extension cords and a lot of finger crossing that it didn’t burn it down in the middle of the night. Now armed with power in an official capacity, I was able to take all of this reclaimed lumber I had been storing (in a perfect snake hiding space stacked against my shop) and start installing it on the walls of my space. Sure I could have gone OSB or some other sheet good, but now I had a reclaimed wood canvas I could abuse and not care about the damage I was about to inflect. And oh yeah… I could start installing all the storage I want on it and not worry about hitting studs.

Store Everything On The Walls

When I first started storing tools in my shop I did what most people did and had a standard pegboard sheet installed. I even went as far as to trim it out and paint it bright orange in hopes of tempting an orange tool company to send me free stuff. I went out of town and when I returned almost all of my tools were lying on the floor as the pegboard had turned to mush in the Richmond humidity. There had to be a better solution than this.

That’s when I first reached out to a little company called Wall Control, based out of Atlanta (use promo code LazyGuyDIY15 for a discount). They make an affordable metal pegboard system that uses standard pegboard holes and their own patented slots for a variety of pegboard accessories. I got my first panels and was immediately hooked.

I’ve gone through several iterations at this point, but every wall in my space has their metal pegboards installed holding everything from hand tools, to power tools, to clamps and shop jigs. If I had used cabinetry or tool chests to hold the same equipment it would take up a major footprint of my already tight space. With Wall Control, I can see all of my tools for extreme efficiency and not take up a single foot of floor space. Plus this stuff comes in a variety of colors and looks cool too.

Sort of like in modern classic “Robin Hood: Prince of Thieves” when they yell “to the trees!” every time I run an upgrade in my shop I think “to the walls!” So next up was lumber storage. As high as I could install them, I added storage racks from Bora Portamate that hold 100 lbs. per level! That’s one more thing off the floor that lets me really utilize my space.

So Much Room For Activities

Here comes the payoff for all of that wall mounted storage… Even though it’s just under 200 square feet, I have plenty of open real estate to add bigger tools in my shop. I have two workbenches, both with storage underneath in the form or shelving or tool cabinets. I have a router table and a full sized table saw. Plus a 200 lbs. jointer and a ginormous 52″ tool chest. Oh yeah… everything is on wheels in case I need to move it around as well. My workshop might be tiny… but it’s fierce.

Here’s the important part though… There are little things in my shop that give it personality and say, this is the home of “Lazy Guy DIY”. Sure I might be speaking in 3rd person and I blatantly have a sign that says my shop name, but this isn’t some stark workspace. It has character. From license plates and car parts I’ve been collecting through the years to old hand tools that are beyond repair that give me a sense of nostalgia. It’s not junk, these are objects that bring me comfort. Like hanging a football jersey in a game room, these are my trophies.

I did mentioned there was a TV though. Because if no one else is going to watch my YouTube Channel, I can at least stream my own content and feel better about my views when I’m working on a project. Ha! In all seriousness though, for those quick tips, a Shop TV with access to YouTube is a must. I’ve got my entire workspace on WiFi, from the TV to the lights, it can all be controlled from my phone or by voice command through Alexa. And when I need to get in the groove and really rock out… I’ve got the tunes covered as well with plenty of smart devices and speakers.

When The Space Runs Out

At this point, I am clearly running at capacity. So what happens when I need a little extra space to store things? That’s exactly why this post is sponsored by Extra Space Storage. Whether it’s furniture, tools, or those boxes you never unpacked from moving in a decade ago, sometimes you need to de-clutter, but not purge. Especially if you have a space that you want to turn into your own Man-Cave or workshop like I have. A safe space to store your things might be exactly what you need to kick your project in gear. With over 1800 locations nationwide, check and see if there’s an Extra Space Storage near you!

3.5 6 votes
Article Rating
Previous Post: « Rustic and Modern Walnut and Maple Side Table
Next Post: How To Pour A Small Concrete Slab »

I also have a small woodworking shop that is 10ftx12ft mini barn w/loft it’s heated w/6ft base board heater. I have a shopsmith w/all the extra accessories.

I thoroughly enjoyed the video and would love to see more