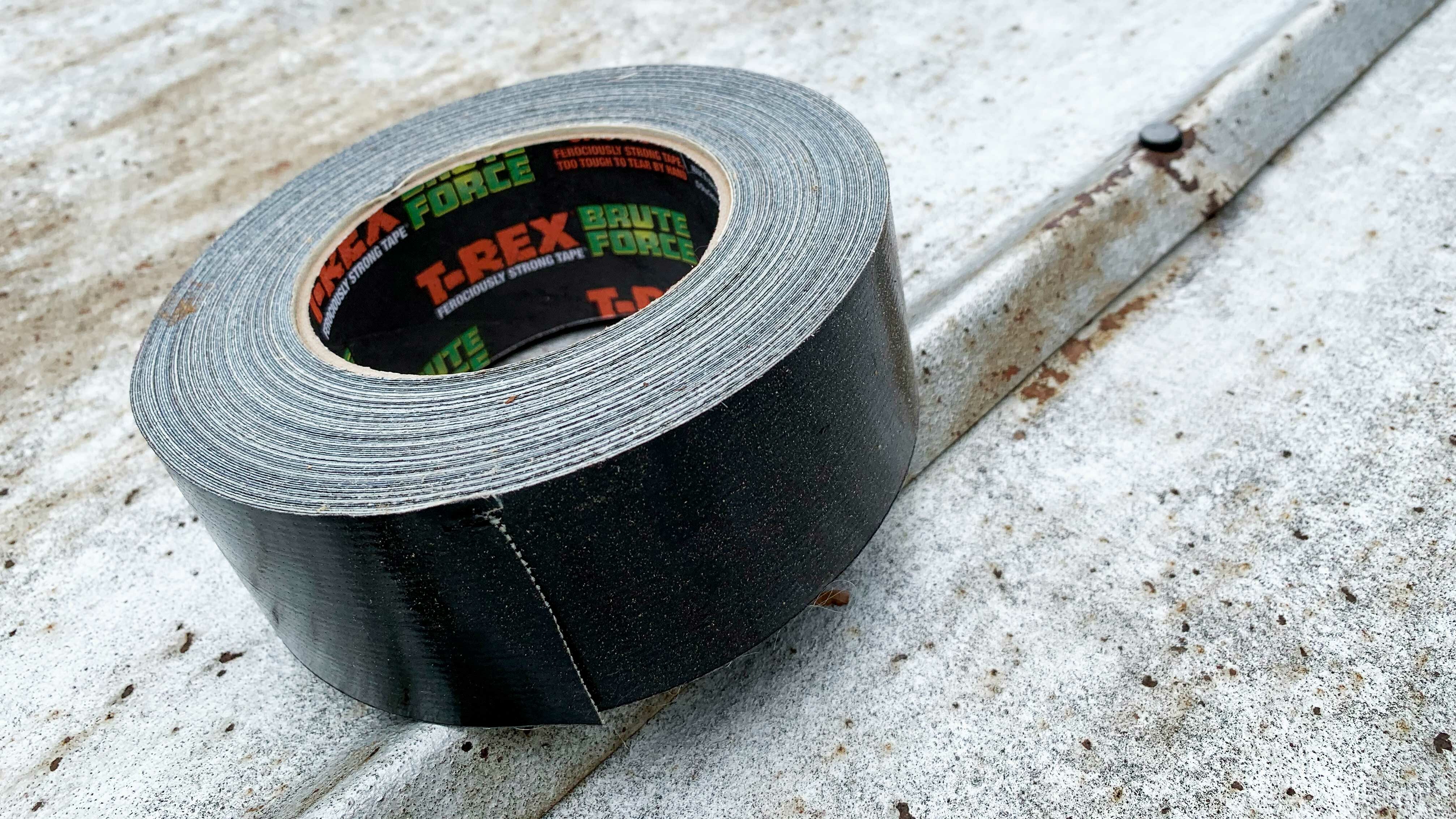 The “come out of nowhere rain season” is about to start where I live and I’ve got a problem. My half a century old detached garage that I use as my workshop is starting to really show its age. It’s a glorified corrugated metal shed with a corroding metal roof. When you have a shop full of goodies, the last thing you need is for it to rain on the inside as well so I need a short term fix. Enter T-Rex Tape.

This post is part of a year long series of DIY Hacks Sponsored by the Ferociously Strong T-Rex Tape. Different tapes for different jobs! Keep up with these ongoing tips!

The last thing you want to come home to after a long trip is stepping into a puddle on the floor of your workshop. When you start thinking about moisture, humidity and rust with all of those metal hand tools and power tools… it’s nauseating. So I need a DIY Hack now that’s going to fix the problem immediately while I figure out a long term solution. So I grab a roll of T-Rex Brute Force Tape and a ladder and headed up to the roof.

With the lights out on the inside I started looking for daylight… and oh boy did I find it… everywhere. Well that explains water getting in. This isn’t my first foray with the shop leaking either, I actually did some patching a few years ago that had worked… in those areas. So I’m basically trying to stop the flow of water through a slice of Swiss cheese right now.

T-Rex Tape To The Rescue

After a little inspection, it became clear pretty quickly where my trouble areas were. The overlapping seams of the sheet metal were allowing water to get underneath when rain fell in any direction other than straight down.

Using a roll of T-Rex Brute Force Tape, I started cutting strips and applying pinstripes on my troubled roof areas. So why did I go with the Brute Force? I could have used the Waterproof R-Flex tape or the standard T-Rex Tape but didn’t. I went for the strength of the Brute Force with it’s double thick adhesive and durable waterproof backing. So it’s the best of both of those worlds, plus it will hold up to the extreme heat and cold that will be attacking my roof.

0 0 votes
Article Rating
Previous Post: « Is It The Circular Saw Or The Saw Blade?
Next Post: Epoxy and Wood Lunar Surface Night Light »