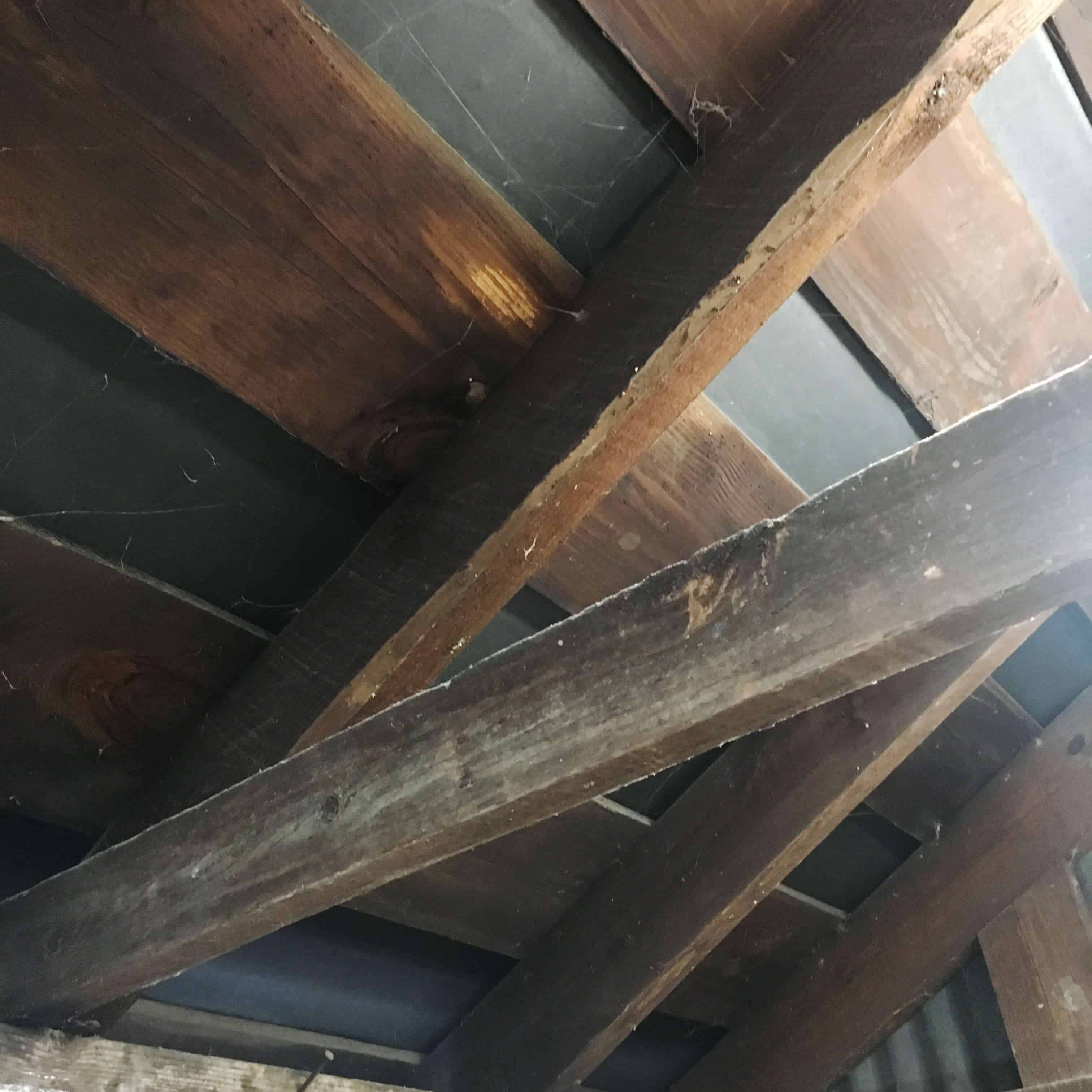 It’s the week of Christmas and I bet you have visions of sugar plums and DIY plans dancing through your head.  Well unfortunately you’re not getting any plans this week, but you do get an update… on the garage!  Hooray!  Sorry (not sorry) that it’s not as exciting as you might have wanted.  You know what is exciting?  Rain!  Okay, also not exciting.  (Take two) You know what’s exciting?  Rain… on the inside of your shop getting your projects wet and streaming water down your electrical cords!  Now that’s exciting!  Or terrifying… you pick.

So back in June we had a ridiculous storm come through that caused a ton of damage to the neighborhood.  While we were hunkered down in our basement (with kid and pets) all I could do was watch out the little windows during lightning flashes and see the door to the garage ripped open and then panels of the metal roof get peeled back.  It was kind of like watching a horror movie where you can only see what’s happening when the always convenient to scary movies lights occasionally flicker to see the monster.  I was mainly waiting to see the inevitable tree limb fall on my shop or the chicken coop since we could hear them breaking all around.  Luckily it didn’t happen.

Flash forward to present day after I made some half-hearted repairs to the shop after that storm not realizing how it would affect future me.  I’m in my shop when a monsoon hit.  Which is weird since we live in Virginia smack in the center of the state.  So it was one of those rare inland monsoons instead of the typical coastal ones.  Well I had my shop littered with projects and tools, then all the sudden it started raining… inside.  Not just a leak in one spot, try a dozen different spots in addition to water coming through the new pallet wall I installed.  It looked like a dam was about to burst.  Water should not come through a wall like that.  I realized then that perhaps my shop was not all that water tight, but most importantly, that it was time to pull out my Tetris skills and start stacking tools (and projects) like there’s no tomorrow to keep everything dry.  You can’t just move stuff out of the way and hope it stays dry though, I then started putting makeshift buckets around the shop floor to try to collect whatever monsoon water made it’s way in.  Which was a lot.

So it’s not like there were giant holes in my metal roof panels that were leaking.  What could possibly be causing this? 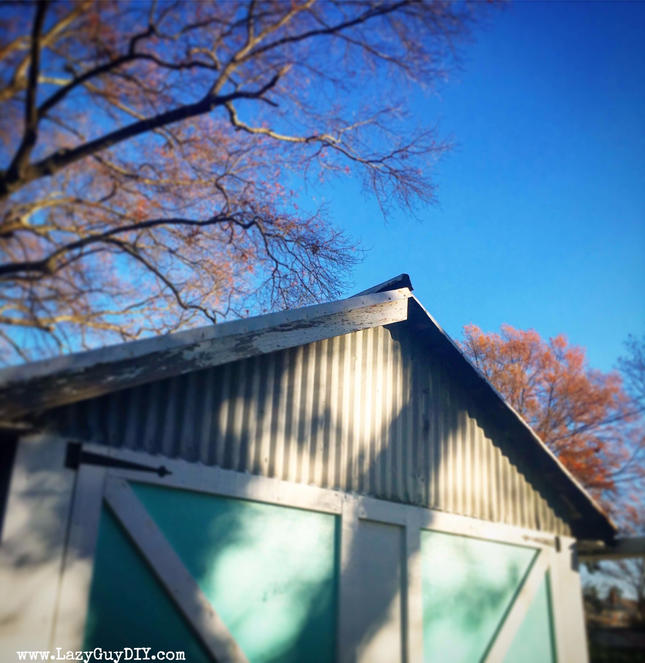 The pretty blue sky is there to distract you from the craptacular trim work I never fixed.  What’s happened is that when the trim came off and the panels blew up in the storm, it royally screwed with the eave of my garage roof.  While I might have fixed the roof panels by hammering in some new nails with rubber gaskets… it wasn’t enough to fight back rain that gets blown in all directions. Here’s why… 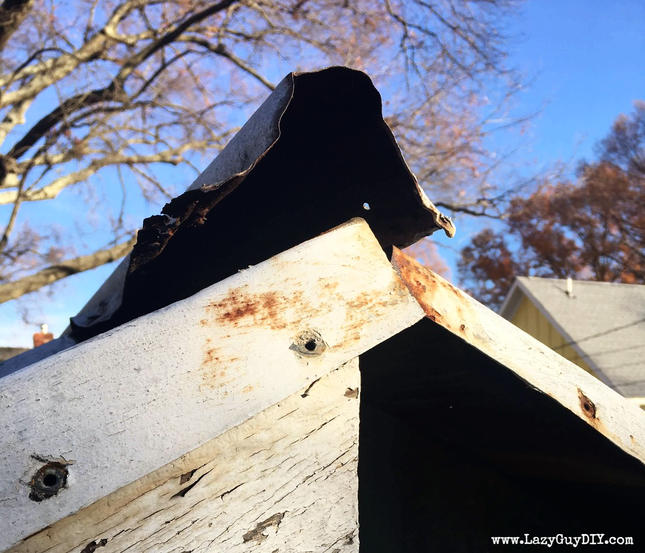 Well there’s your problem.  Well… a couple problems.  Not only did the eave of the roof rip out when the trim came off and left a giant gap for rain to come in to… but the panels underneath didn’t even run all the way to the top.  So that means rain could get underneath and go inside.  The worst part about the eave coming up is that it acted as a funnel for the rain water to go down the roof line and leak all over (thus the 12 leaks at once).  So how does one fix this? 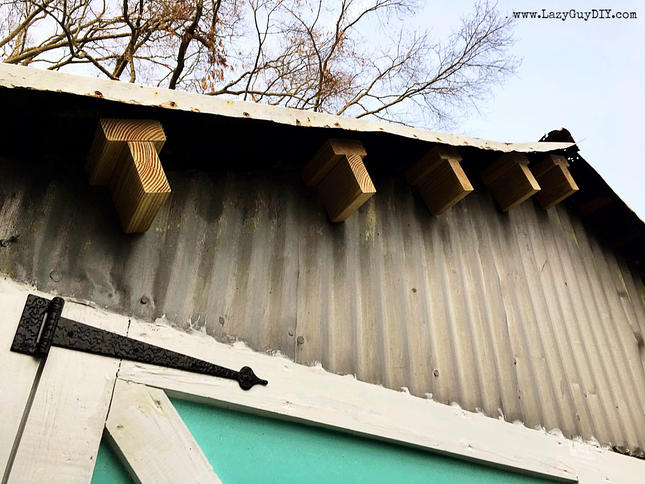 First thing on the list was to repair the trim work.  While I appreciate the craftsmanship of a lot of backyard builds from over 50 years ago… this was not one of them.  The trim was held on by nailing it to the ends of the roofing underlayment and then they bent the roofing panels over like a drip edge and secured them with more nails.  I’m surprised they lasted as long as they did.  I had to carefully remove all the nails, pull down the old trim (a gentle cough in it’s direction made it fall off) and then install support blocks for the new trim. 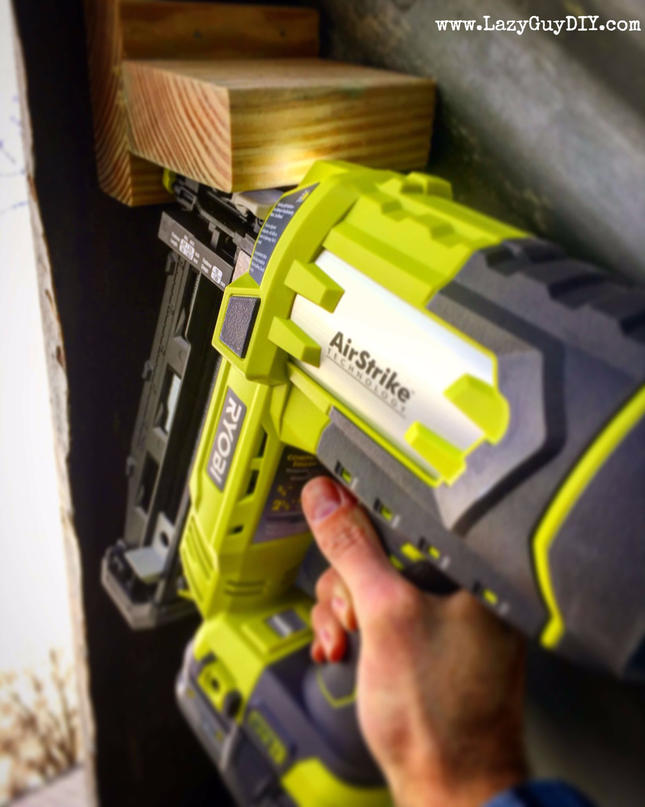 For this I finally got to fire up my 16 Gauge Ryobi Airstrike nail gun.  I use the 18 gauge regularly, but it was time to let the big dog eat.  Speaking of, I had every dog in the neighborhood barking by the time I was done.   It’s slightly quieter than a gun shot.  But let’s talk about how much easier it is to use a nail gun on a ladder when you don’t have an air hose hooked up to a compressor… so awesome!

With the blocks installed I measured the one remaining piece of trim and cut and primed pressure treated 1×8’s to replace the pieces that came off.  The old pieces were 1×6-ish boards that left a gap big enough for squirrels to make nice little nests in the corner of the roof line, the 1×8’s fixed that.   Sorry squirrels!  Find another garage to live in you fluffy tailed rats.  Sadly, I’m actually not going to show you the completed trim… yet.  Stay tuned for another post on that. In the meantime… back to the roof.  I had more problems…  Because water had been coming in through the eave for quite some time, I had some significant damage.  I couldn’t just reattach the eave through the existing holes because they had ripped out completely.  Unfortunately, If I made new holes I would then have to patch up the old holes (and by holes I meant torn through rusty metal).  Not to mention… see how there’s about a 1 inch gap between the two panels at the peak?  That’s grand central station for funneling water in down the roof line. 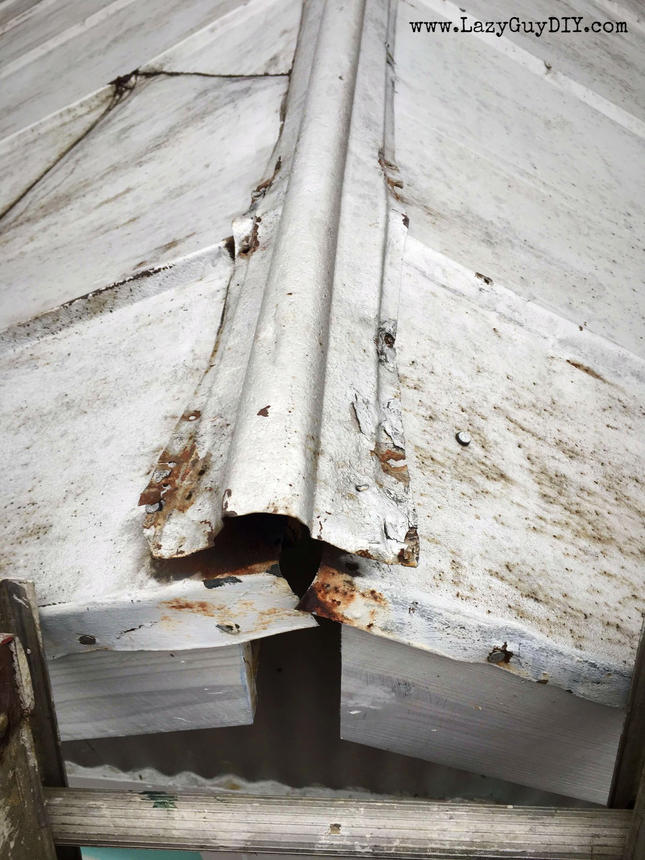 My fix isn’t a pretty one.  Especially since metal panels that you buy in stores today is no where near the same thickness or quality as  the old stuff.  So buying a new piece to patch would stick out like a sore thumb (or an ugly roof patch job).  Luckily, I still have scrap metal from the scary garage doors sitting around (much to my wife’s chagrin) the back yard.  I ended up cutting out a few lengths of old sheet metal (minus the rust) that I could attach under the roof eave between the ridges of a few panels. 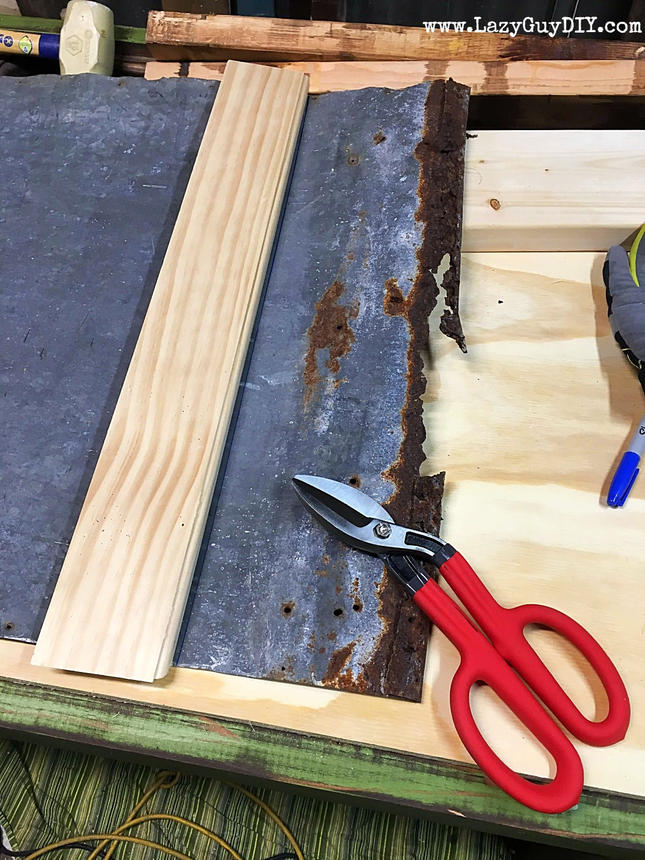 I picked up a pair of industrial metal shears at Home Depot and cut through the sheet metal like… metal butter.   The question was how would I attach this to the roof.  Rivets were suggested to me… but the problem with pop rivets is that you need to be able to get underneath in order to “pop” the rivet.  Instead, I went straight ugly MacGyver and used duct tape.  Kidding.  I did what I said I didn’t want to do and drilled new holes in the roof.  I used stainless steel machine bolts, a galvanized washer and a rubber gasket and pushed those through the holes in the top.  On the underside, I used a wingnut and tightened the bolt down to create a seal.  I did one side, then worked my way to the other so I could get a tight fit. 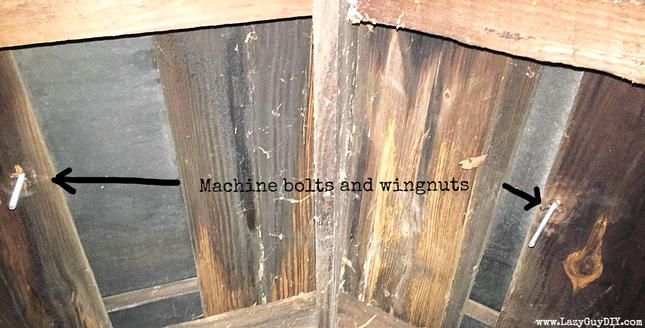 Best graphic ever!  It’s ugly… like Pug ugly, but I can proudly say we’ve had multiple downpours recently and not a single drop has come down in the shop.  So like an ugly pug… it might not be the best looking… but it’s lovable for what it is.  Ha.  I was then able to attach the roof eave with more nails with rubber gaskets.

I didn’t show a ton of detail on the trim I know, but that’s because I’ve got an additional post coming up on that in the future.  Plus some upgrades!  Until then hopefully this helps someone or at the very least… it’s filler for a slow week of building in the shop. Ha!