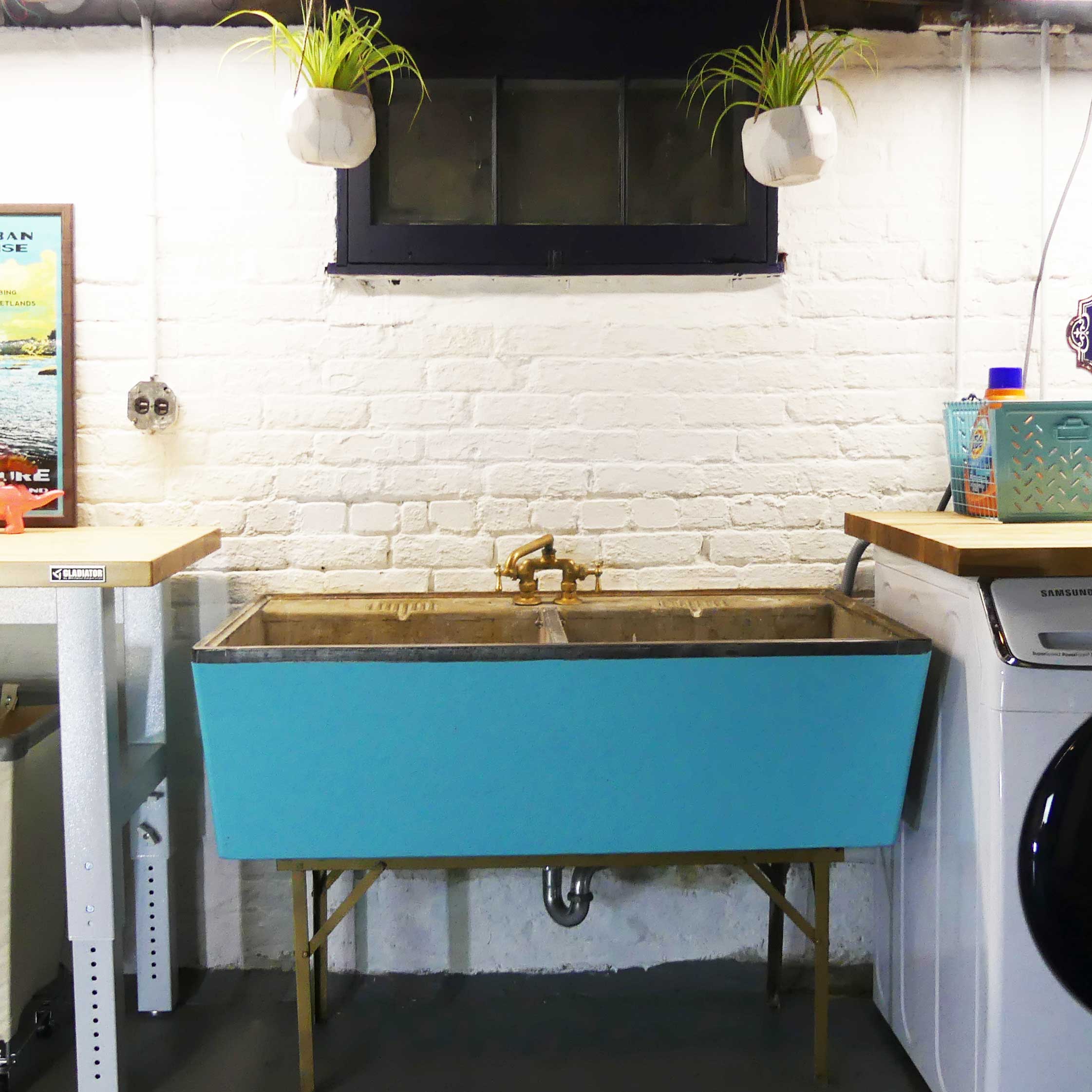 A while back we revealed our Scary Basement Makeover that came with a lot of new bells and whistles… but there was one element that stole the show: our original Concrete Double Laundry Sink. At first we thought the behemoth was a Soap Stone Sink given the age of our Craftsman Style home. After a little research (from the patent number we found on the bottom) we found we would have to approach this in a whole new direction. So find out how we brought this show stopper Vintage Laundry Sink back to life!

*This post has been sponsored by Dremel Tools and would not have been possible without the help of the Dremel Versa! Affiliate links included.

So why the big deal from the original post about whether this was Soap Stone or Concrete? It all comes down to restoration. The main ingredient in Soap Stone is talc, which is one of the softest minerals. A very light hand sanding and then a generous application of mineral oil and the Laundry Sink would really pop. Because Soap Stone darkens over time it was easy to confuse the two here. When I looked for the manufacturer’s mark and found a patent number, I plugged it into Google and looked it up! Concrete!

A big difference here is concrete made today versus concrete from almost 100 years ago. For Laundry Sinks like mine the concrete mixture contained a good amount of Portland cement which is extra strong, but still very porous. Going at this with a rough abrasive and the wrong chemical cleaner and I could do some serious damage.

So how did I clean and restore the concrete sink? I had to break it down into sections because the outer wall, top edge, inside basin, inset washboard, faucet and metal stand all needed special attention. You can also check out this video below!

The outer wall of the sink was in relatively good shape despite being a basement eyesore for decades. It has it’s fair share of dirt layers and paint splatters, but that were easily cleaned up. After consulting my buddy Scott Sidler from Austin Historical he told me I could lightly sand the basin with a random orbit sander and a high grit. With a dust mask on I quickly sanded out the wear and tear with 220 grit.

During my research of the patent number, I found out that this particular sink traditionally was painted black on the outer basin. So that explains the darker coloring and gave us the idea to bring in a fun color. Using the same tinted (Behr Key Largo Green) concrete paint I used in the Floor Stencil Tutorial, the pop of color went on easily.

Top Edge Of The Basin

Guess what’s not concrete? The top edge of the Laundry Sink! It’s actually zinc! It’s there to reinforce a high traffic area that could have easily been chipped concrete after years of use. So kudos to zinc! However… it’s also not something you want to sand with random orbit sander. The abrasive would just leave scratches. So now what?

Time to pull out the Dremel Versa! Yes, it’s a rotary tool, but you have a variety of scrubbing pads to swap out. In this case I used the non-scratch pad and wait for it… toothpaste with baking soda. A damp pad and a generous application of toothpaste shined the zinc edge right up!

The area of the Laundry Sink that took the most abuse is by far the inside basin. I’ll admit… in the decade we’ve lived in the house I’ve cleaned quite a few paint brushes without much care to the inner surface. It started to look like a Jackson Pollock. With a lot more chipping and degradation sanding was out of the question. So now what?

Again I used the Dremel Versa but this time I used Oxy Clean to scrub first using the bristle brush attachment and then the heavy duty scouring pad. You need to be extra careful about what chemicals you use on the inside. While a tough chemical cleaner can certain take the miles off, it will most likely disintegrate the original drain connection which is apparently nearly impossible to replace.

Also on the inside of one of the basins is an inset washboard. At first I thought it was a poured concrete form, but after a little scrubbing I realized it too was made of zinc! So once I took off the initial sink scum, I went back over with the Versa non scratch pad and toothpaste to make it shine!

We then used Rust-Oleum Metallic Champagne Bronze Protective Spray paint on both the legs and the faucet for an added element of color. Making sure the room was well ventilated, I put plastic and cardboard down around the legs (since I just painted the floors!) and sprayed those in no time. For the faucet (since it was never going to be removed!) I surrounded the area with plastic and pulled the hardware through and sprayed into the make shift spray shelter.

It’s hard to look at this and not give a lame tagline like “from drab to fab!” but it’s true. When I see people online talking about busting out these vintage laundry sinks with a sledge hammer I absolutely cringe. You’ve got an original piece of history that should last for centuries! So why not bring it back to life. But if you must get rid of it… try to salvage and sell it because believe it or not people will pay thousands for them. So put that hammer down!

*This post has been sponsored by Dremel Tools. I have been compensated for my time and provided with tools in exchange for an honest application of the Dremel Versa. How did it work? I think the results speak for themselves!

Thanks Sandra! We loved how it changed the whole space!

Hi there, this looks great! I have one of these but without a stand or a faucet. I have it set on concrete blocks as an outdoor garden sink but am running into trouble finding a faucet like yours. Unless I missed it I don’t see if you restored your faucet or got another one. Because these types of faucets are on 3 and a half inch centers all the ones I’ve found online the pipes come in from the top instead of underneath like yours. Any info is much appreciated, great job!

I lucked out and was able to re-use the faucet on my sink. I’m told their a dime a dozen at salvage yards though because of how common they are. That’s the best bet because like you said, there just aren’t any reproductions out there to swap out.

I came back to reread and just saw the part where you painted it! Thank you for the response, I will try that.

The paint has held up surprisingly well to our wear and tear. It just needed a good scrubbing before application.

I can’t believe my eyes. We have one just like this. You have made the sink look so nice. We have some leeking problems. So, I not sure it can be fixed.

There are ways to patch with epoxy and resin if you have leaks. The biggest issue is with the drains if that rusts out. It’s hard to replace those from what I’ve heard.

I recently purchased a 100+ house with an identical sink. The 2 sink drains are connected underneath into a single drain. Looking at the drain it is badly corroded, I really have no idea how the metal plate that holds the drain pipe is installed and so currently have no idea if and how it can be replaced. Does the patent show what is behind the plate.

Sorry, just caught this! Because of how long ago those patents were filed, the detail is not great. But I was able to get a lot of information googling the info that others have found.

Thanks for the post. There is not a lot of information about restoring concrete sinks so I thought I would add my recent restoration. I used a reciprocating saw brush attachment to clean the inside, a paint removal attachment used on auto body work. After that I used hammered black spray paint for the base and euro gray behr latex paint on the outside. I toyed with the idea of painting the inside with an epoxy paint but felt the steps were fairly complicated and results would have been suspect. Here is an image of the final product. 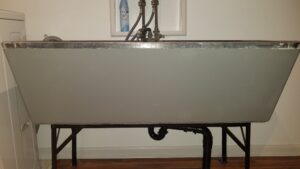 Thanks for the info! That sink turned out great! I think you’re right on not messing with the inside. You’d lose some of that character too by doing so. As long as it’s in good shape the outside is a good overhaul to stick with.

I have one of those sinks and was thinking of replacing it. My washing machine empties into it and the drain hole is so small that both side of the sink fill when the washing machine drains. Is that typical? I would need to hire someone to redo it. Is it worth it or would a replacement be more economical? Needless to say, I am not very handy!

Our laundry does the same. It wasn’t until I added a filter on the drain and cleaned out the line that I solved the filling up issue. Because there’s so much lint that comes through we were clogging up the line like crazy. Check that first before anything drastic. The sink is literally hundreds of pounds and a pain to remove, but then if you were to buy one used right now they would cost you a couple grand. See if you make it work because they are absolutely better than other options out there in terms of size.