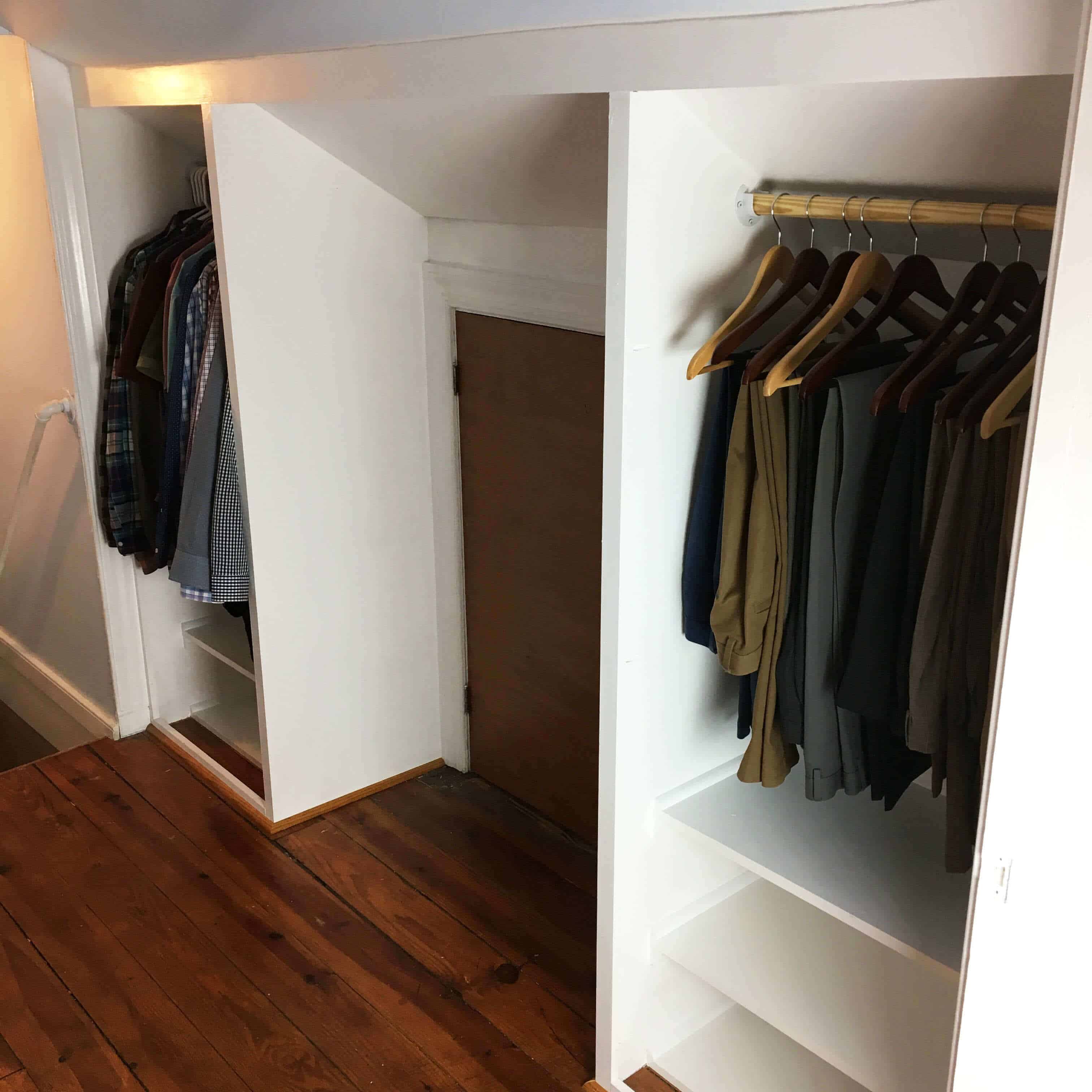 So you’ve built some DIY furniture and maybe dabbled into the world of fine woodworking, you want a real “How To” challenge?  Try your hand at built in closets in a house that’s almost a century old.  You’ll have a new appreciation for carpenters and then you’ll go back and apologize to your middle school math teacher whom you brazenly asked “when will I ever use this in real life?”  Sweet baby angles my head hurts (still)!  When nothing is square you learn to adapt.  In good news, I’m here to help and show you how I approached this project and show you what tools I used to finish the job!

This post contains tools that are part of The Home Depot Pro-Spective Tool Review.  Affiliate links will be marked with an * 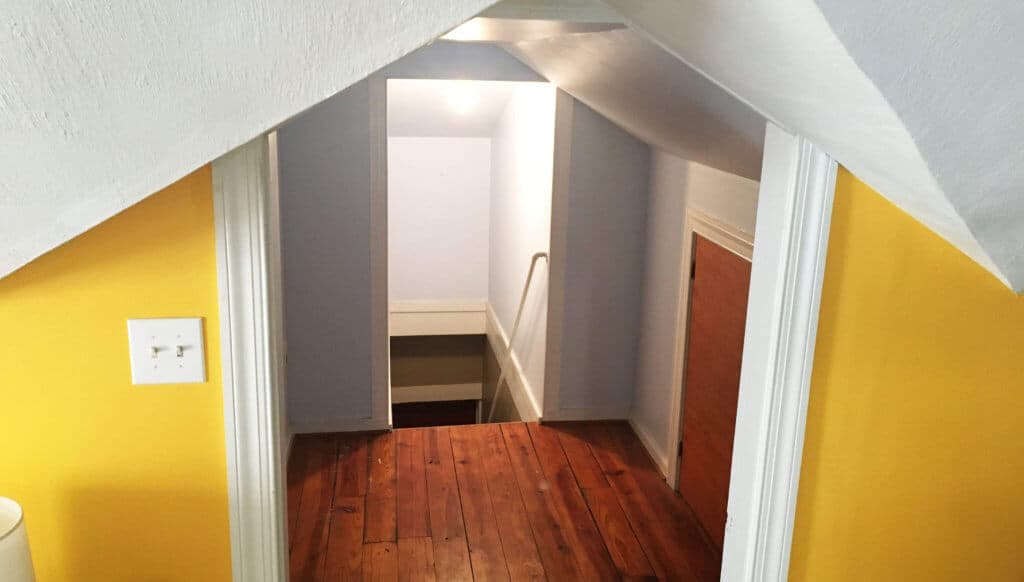 First off, I love our house.  The retro vibe of our Craftsman Style Bungalow was exactly what we were looking for in a home.  It has a personality that suits us with plenty of fun little quirks.  Sort of like the sloping roof line and dormers that make for an interesting ceiling topography in our upstairs master bedroom.   Unfortunately, that personality is also hell on an install where you’re looking for square dimensions for an easy build.  In a house with straighter lines this is a project where you could build out the carcass ahead of time and bring in and assemble… not the case here. 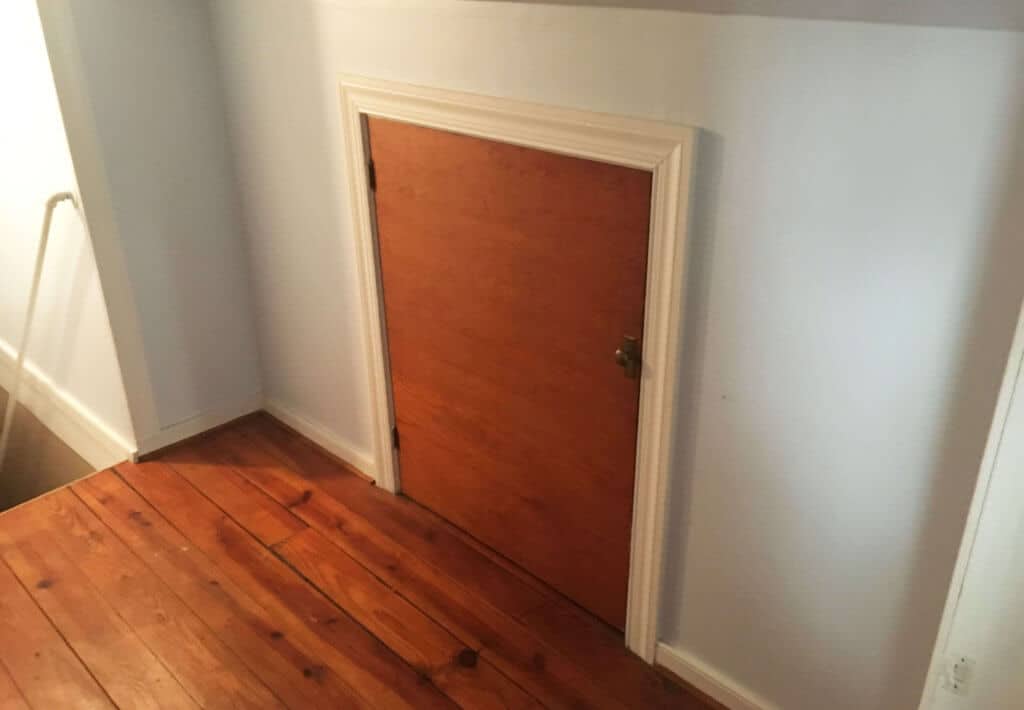 Short on closet space we opted to add these built ins on one side of this awkward little hallway that leads to our bedroom.  To give you an idea of this layout, you come up the stairs at the back-middle of our house and go through a 10 foot hallway that has access to a sloped ceiling crawlspace on either side (that’s always a million degrees inside).  At the end of the hallway it opens up to a big space that’s our bedroom and half bath on the front half of the house.  You would think this hallway would be centered on the stairwell and open with a straight shot into the bedroom threshold… you’d be wrong.  It’s weirdly offset.  With the extra real estate of space we opted to add the built ins on the left side and then realized our next challenge… If we wanted enough clearance for a clothes hanger to fit… the existing mini wall was going to have to be bumped back 4″-6″. 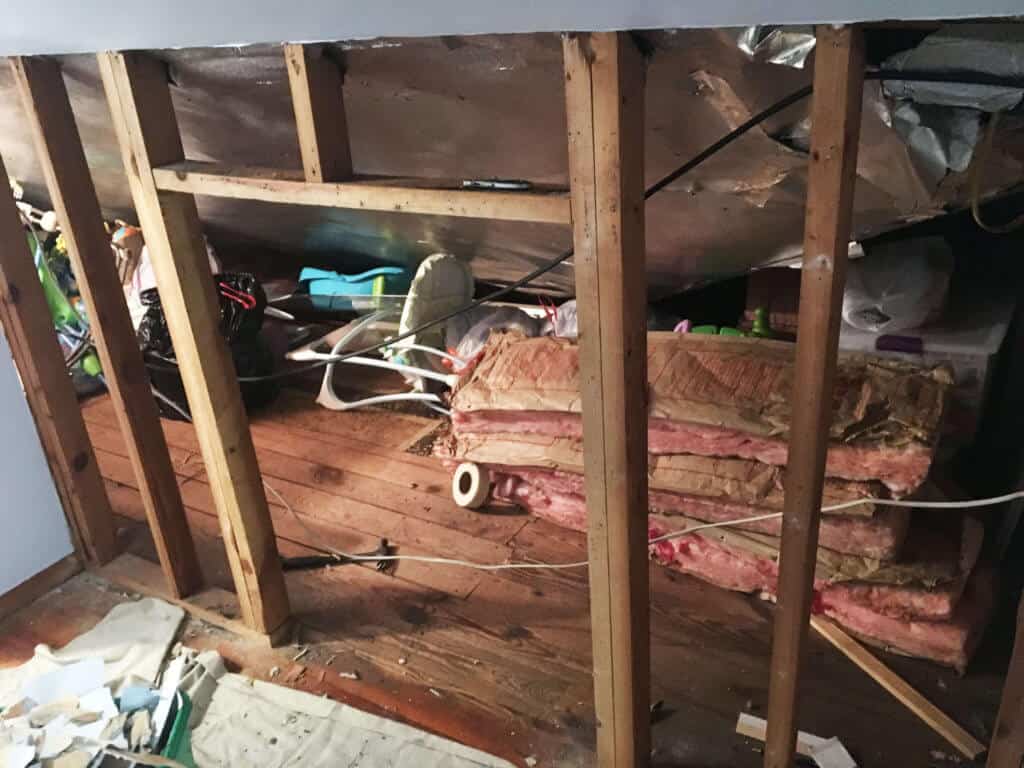 We’re not talking sledgehammers here.  The idea is to remove everything with precision so you can re-use the pieces when you reassemble the space.  First off we (I say “we” because I called my dad to come help!) carefully popped off the trim around the crawlspace door and the baseboards.  The little Dasco Pro 7-1/2″ Utility Bar* is perfect for salvaging pieces that could easily be damaged with other over-sized pry bars.  With the trim off and salvaged, now it’s time to talk drywall.

Everyone always wants to “Hulk Smash” and punch through drywall, but in this case, we needed to make sure we were only removing the sections that we were replacing.  Using a utility knife like the Husky Folding Lock Blade*, I scored the seams and was able to remove the sections without damaging the connections at the corners or the ceiling. 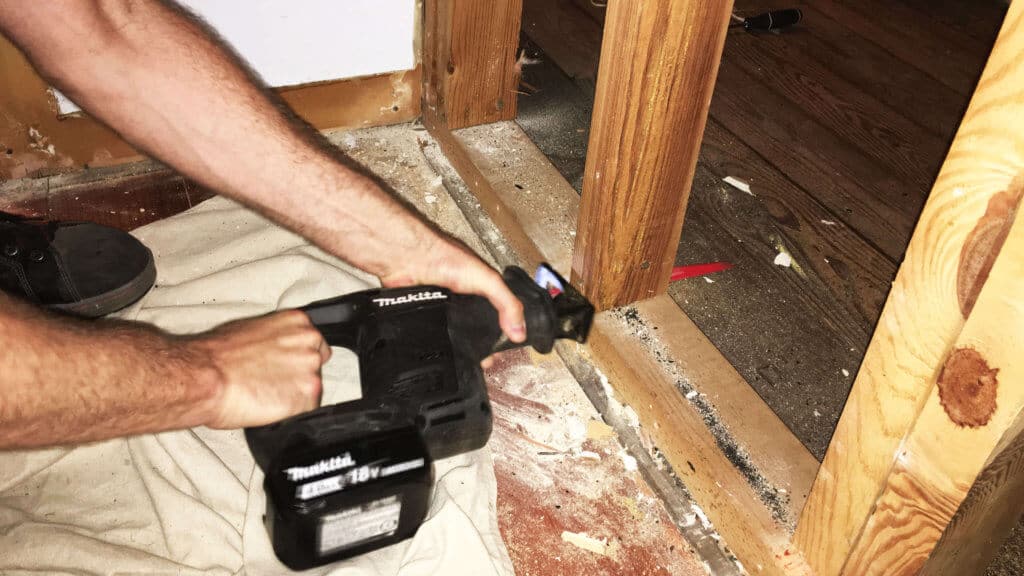 With the original studs exposed (I should mention that we determined they were non-load bearing well before) my dad recommended that we salvage those 2x’s as well and use them to rebuild the wall.  For this I pulled out Makita’s Sub-Compact LXT Reciprocating Saw* with Diablo’s Nail Embedded Wood Saw Blade Kit*.  You might remember that last year I reviewed Makita’s Heavy Duty LXT X2 Reciprocating Saw, but this is a case where space was tight and a sub-compact line makes perfect sense.  With this model I could easily slide the blade between the studs and cut through the nails for removal.  Slap on a Makita High Capacity Battery* and we were in business for the entire weekend! 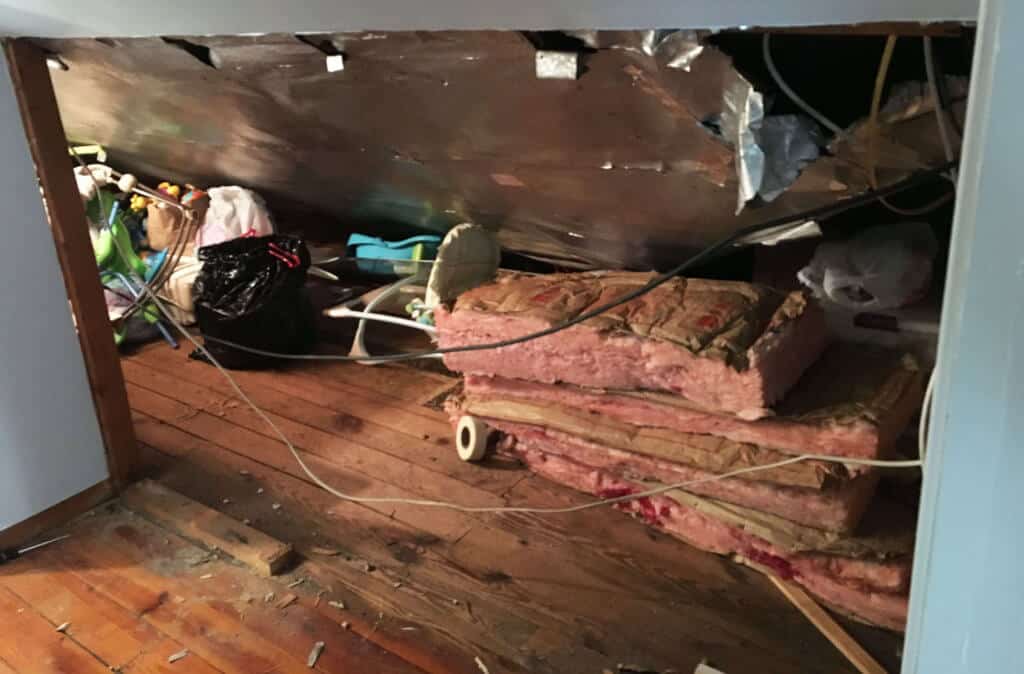 I know I know… it seems silly to tear down a wall and then rebuild it 5″ farther back than it was before.  The whole point was to accommodate a new closet so we had to make the space wide enough to hang the clothes rod and still hold shirts and pants on a hanger.  The sloped ceiling though… made it challenging.  Unfortunately, we couldn’t just tie the original framing studs to the existing roofing rafters… that would make too much sense.  Because of the original access door and trim work, we wanted to use essentially the same footprint, just accommodate for the slope and make the original studs shorter. 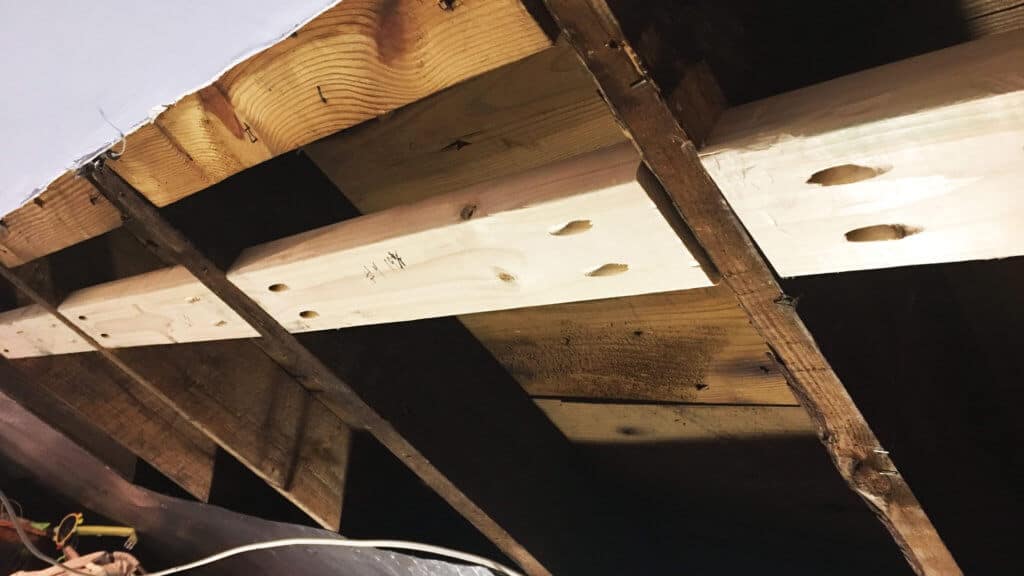 Using a level and a scrap piece of 2×4 we were able to determine where our relocated studs would hit exactly and then measured the distance between rafters.   We then cut 2×4’s to those lengths to create a solid surface for the studs to attach to.  Believe it or not… we used Kreg Jig Pocket Holes* to secure the spacers and then reattach the framework.  This is also where things started to get weird… 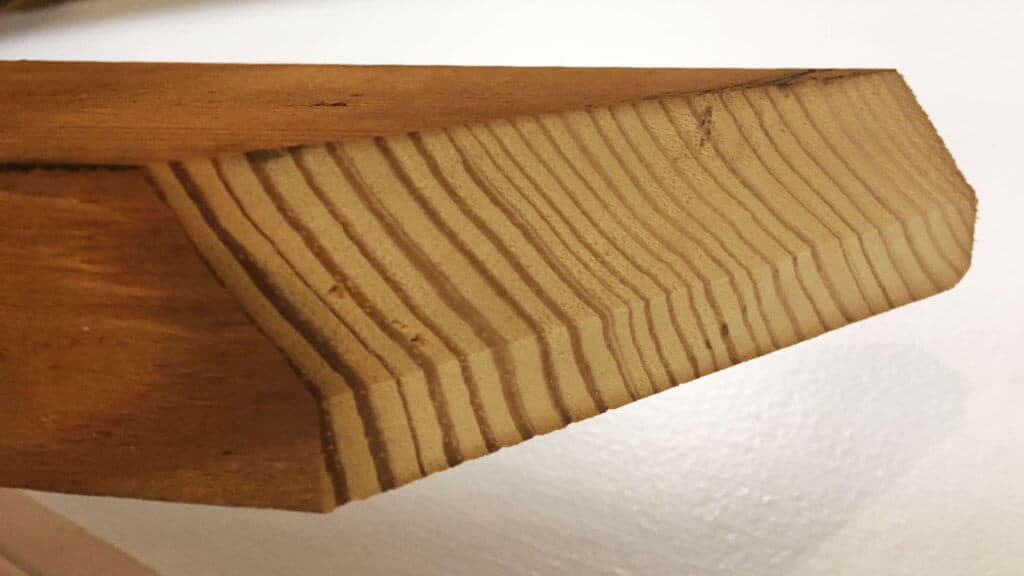 With our studs numbered so we remembered where each would reattach, you would think we would just cut off the bottom and the angles would be the same to match the slope at the top right?  NOPE!  For each “unique” angle we had to use a T-Bevel* to match the slope for EVERY STUD and then go match that angle on my miter saw (all the way in my shop) and cut it off to length.  Every single angle was different.  Plus because of warps or existing tie ins… we had to get creative. 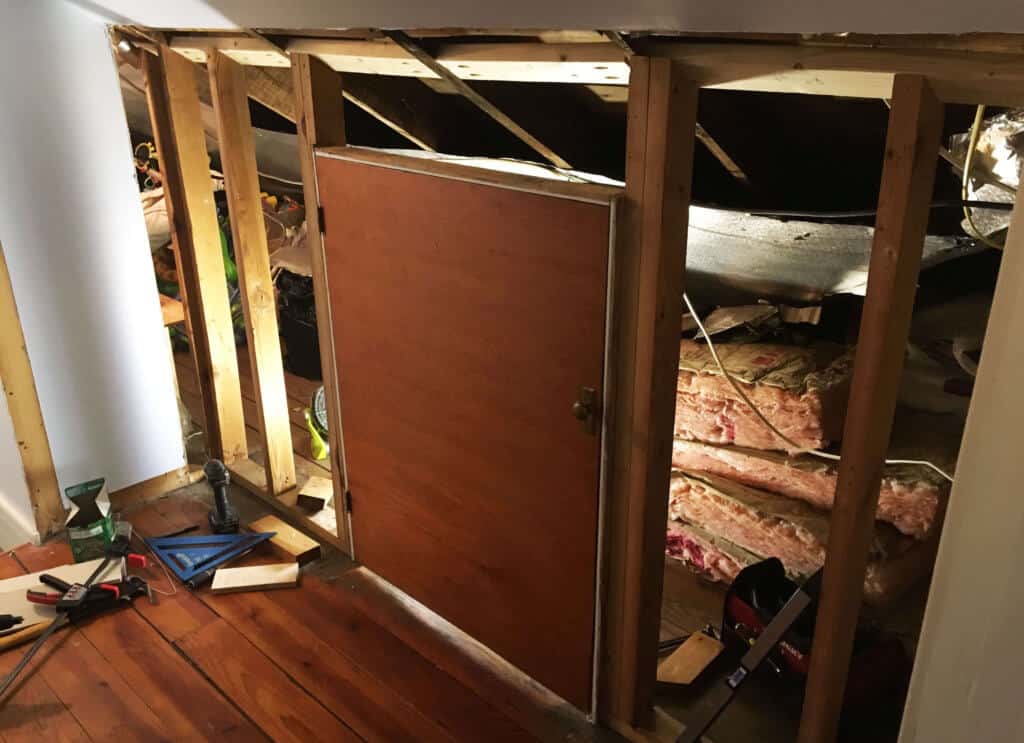 Everything went back together… for the most part, but this was definitely a challenging part of this build.  Before we called it a day, we put the access door back just to make sure everything would fit the same.  Surprisingly… it did!

Here’s a fun little game called “do as I say, not as I do”.  You might have heard it from your parents while growing up.  After wrapping up the first day of demo and rebuild, believe it or not… I had no idea what I wanted my new built in closets to look like.  Sure I have a “built in closets” board on Pinterest, but when it comes down to build time, throw those ideas out the window.  So with the clock ticking and a plan to meet my dad at our local Home Depot at 7am, I got up early and roughed out this mock up in Sketch Up so I could estimate the materials we’d need.  Lazy Guy is more like “procrastination” guy if you really must know. 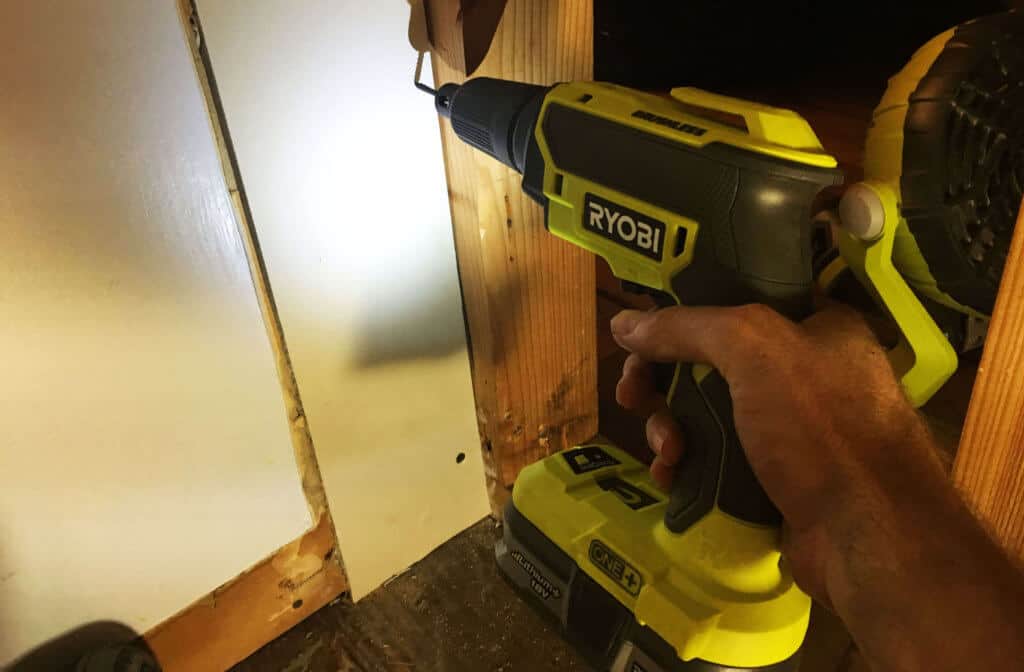 Knowing my dad was on loan for a limited time for the weekend in combination with my hatred of drywall work, I made an executive decision… no DRYWALL!  Well sort of.  I had to patch a few areas where we removed the previous drywall panels and then attached new pieces with the Ryobi Drywall Screw Gun.  If you’ve ever watched First Time Flippers on TV and watched the people struggle with drywall, you’ll understand immediately why a drywall screw gun is a must.  A little pressure and the drywall screw zips right in and stops before you push through the material.  It’s quick and almost as fun as the first time I used an impact driver. 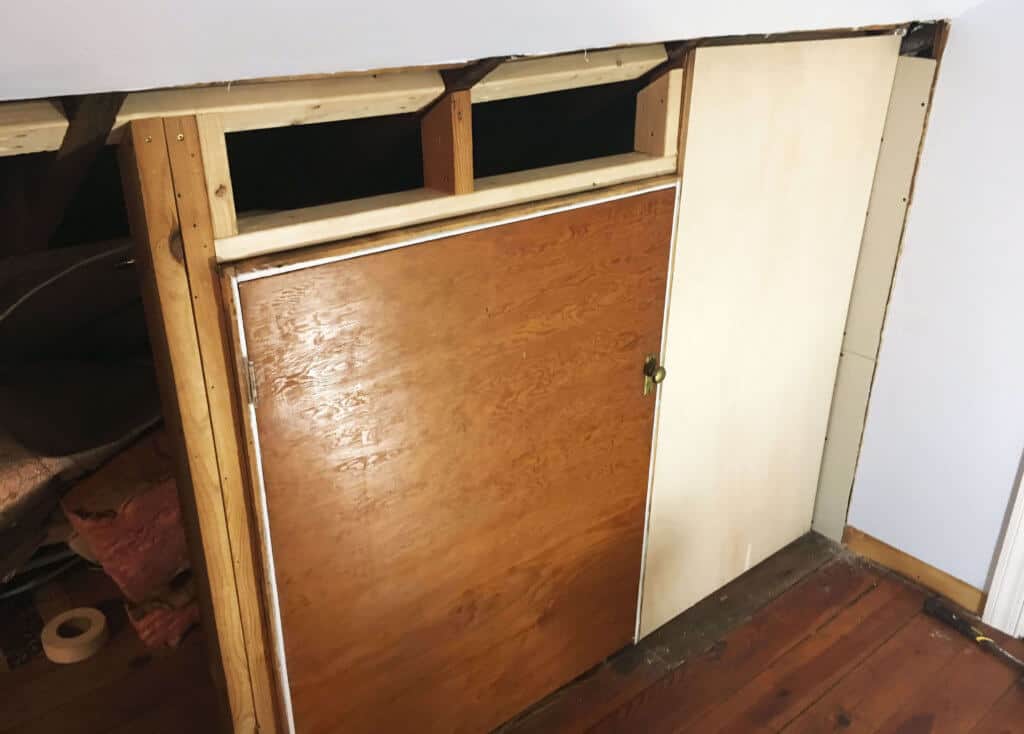 So no drywall for the closets, what did we use instead?  Plywood.  Sanded plywood actually.  No sanding joints.  No drywall mud.  Just install, caulk and paint.  BEST IDEA EVER!  Before you jump on my case about the cost of plywood versus the cost of drywall, when you consider that we had no additional framing and wouldn’t have to cover both sides of the closet build out, it was actually more cost efficient to go the plywood route.  It also make the install MUCH EASIER when you can tie pieces in directly to the plywood sheets instead of searching for studs. 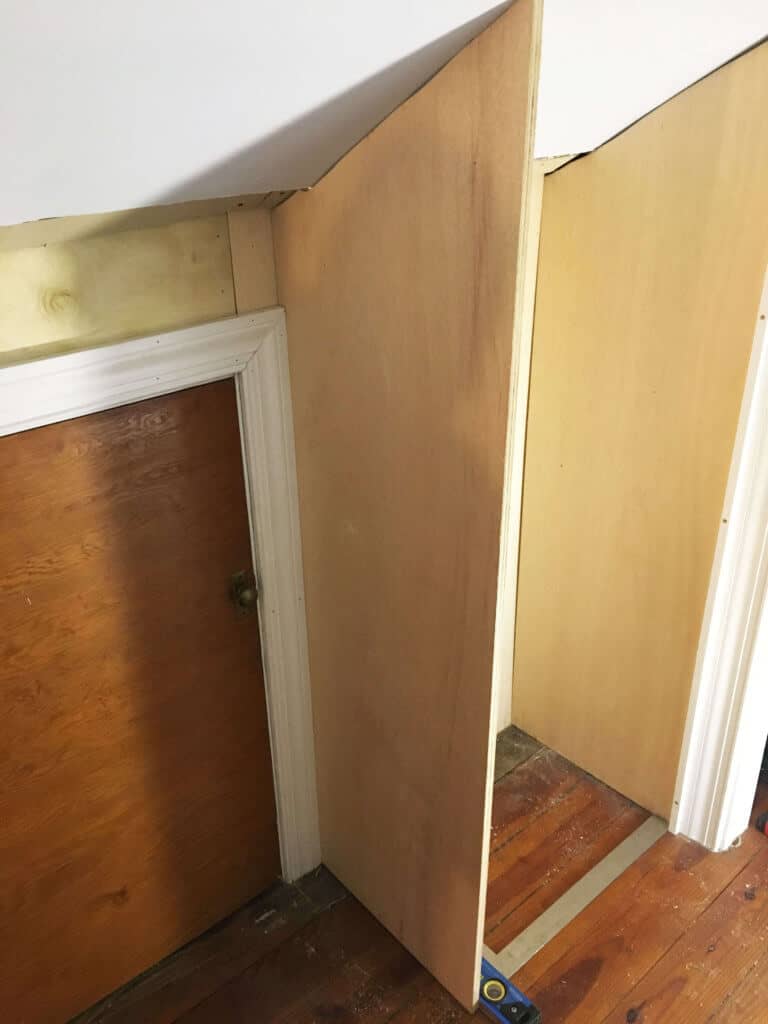 The downside… wonky ceilings, walls and floors make getting the plywood cuts to fit a royal pain.  Often we had to make 3-4 cuts per panel before we hit the right fit.  Even so… you only need to be but so perfect… because that’s why trim was created!  To hide all build imperfections!  The closet dividers went up first and as you can see on those top angles… things didn’t go perfectly.  In fact we ended up using a jigsaw and a few trial and error cuts before we could get them to fit.  Most importantly though… we needed to get the bottoms square first.  Easier said than done.  Just a few pocket holes again inside the closet panel and we were able to securely attach them to the wall and floor. 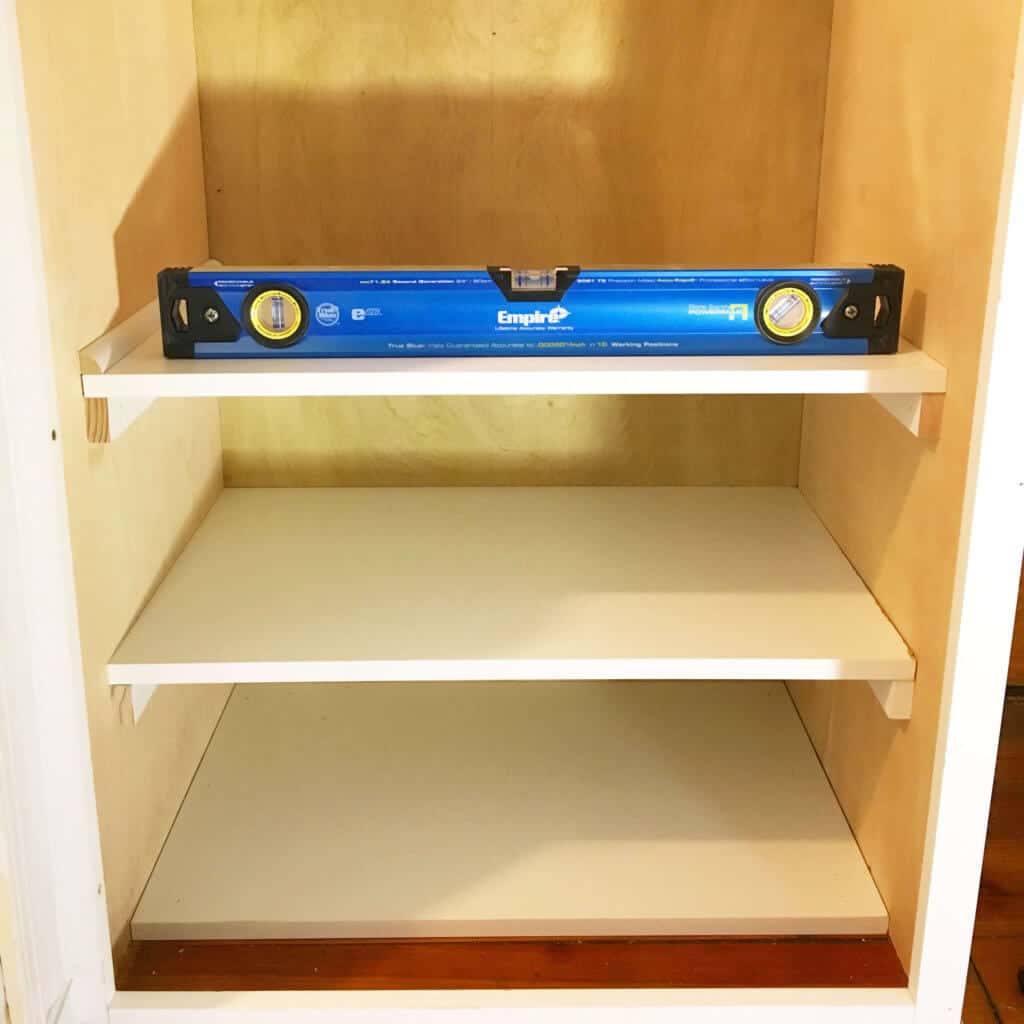 Cutting even more corners for the shelving, instead of cutting more sheets of plywood, I bought 15-3/4″ melamine boards and trimmed them down to fit.  Again… another challenge due to the crazy angles.  When the back of the shelf has a 3/4″ difference than the front… things aren’t as square as you’d like them to be.  However… you can easily get your shelves level!  Using pre-painted 1×2’s (again making it easy on myself) I attached the supports with a brad gun.  And then… I realized for the outward side I had to use smaller brads as I popped a nail right through the newly installed divider panel. 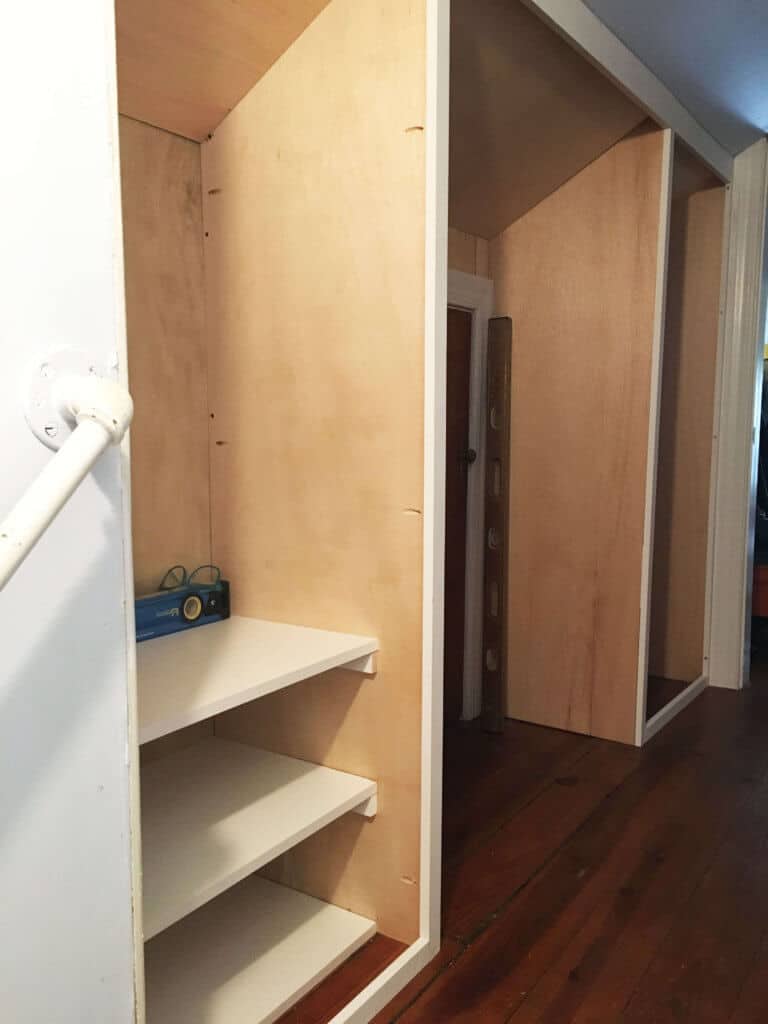 What did I say about trim before?  It hides all imperfections?  You bet it does.  That and caulk.  Lots of caulk.  Aside from the stained quarter round I added to the outside pieces on the floor, I installed all final pieces of trim and started caulking all the unsightly gaps that were completely unavoidable.  No joke.  Not pictured, but I also added white quarter round on the closet shelves as well.  I probably could have just caulked those gaps too, but I already bought the white! 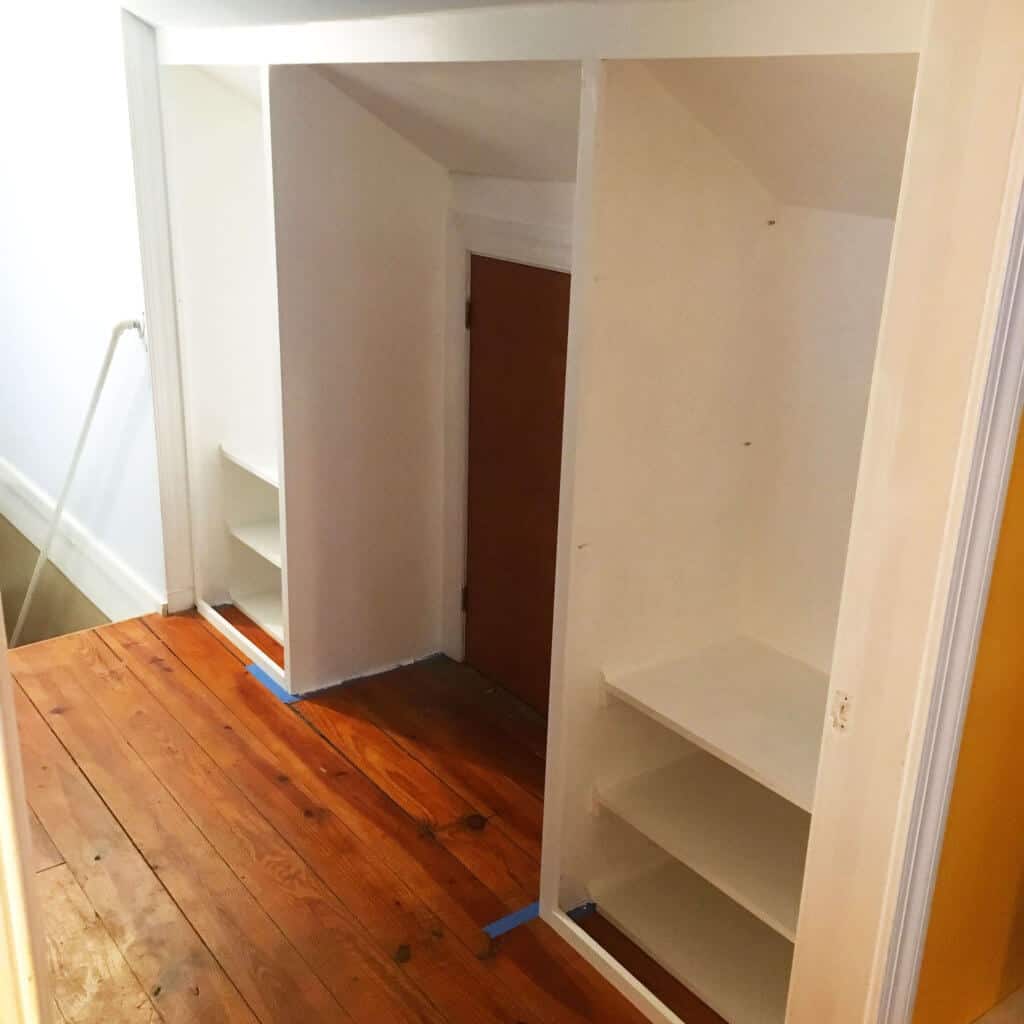 With multiple applications of caulk, it was time to paint.  I used basic white Behr trim paint.  Ultimately, I needed three coats of paint to successfully cover everything.  That is one of the downsides to the plywood is that it can really suck up paint and bleed through.  So expect some heavy coverage and multiple applications. 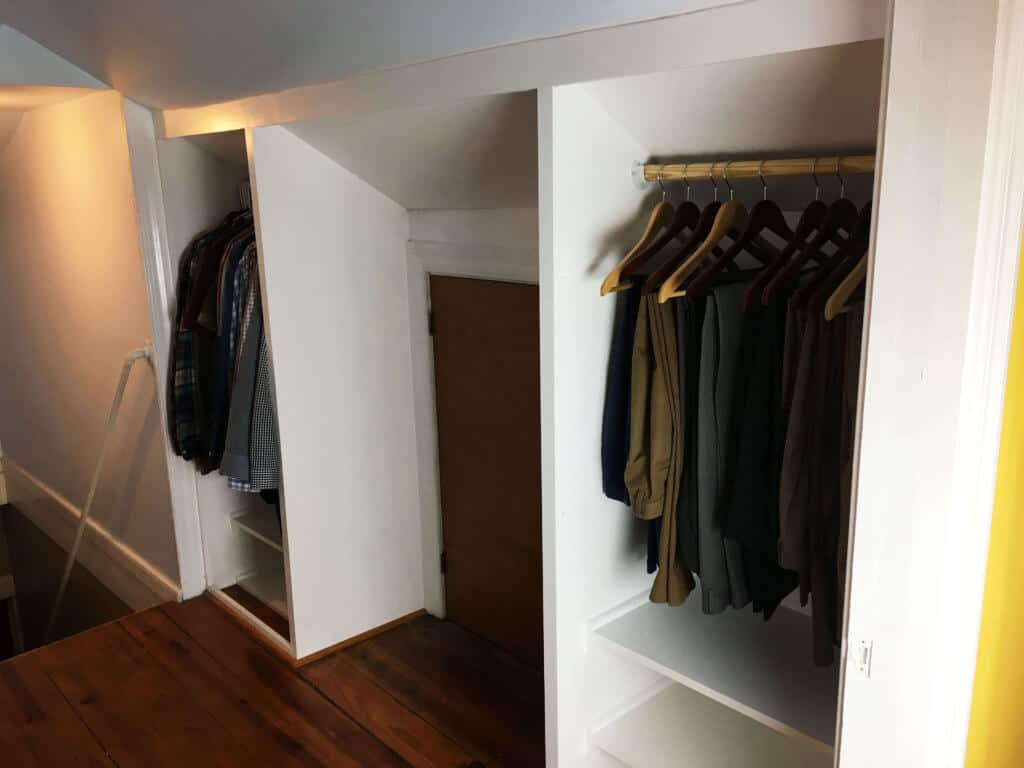 With a few screws to install the clothes hanger bar hardware and a quick cut of a giant dowel rod, this built in closet project was finished!  Sort of.  It’s by no means perfect but It actually looks great when you come up the steps.  I absolutely have a new appreciation for anyone that does onsite cabinetry.  I’d be afraid a client would get tired of all of my cussing at the screwed up angles and the amount of time it actually took me to complete the space.  All in all, it took a long weekend to complete the build out and another day or two for the caulk and paint applications.  So was it worth it?  ABSOLUTELY!  This same build would have cost over a grand for a pro to come in to install.  Meanwhile, I think the finally tally was between $300-$400 in materials.

So what’s next?  DOORS!  Expect to see a tutorial in the near future on how I’m building doors to complete this build… whenever that might be…