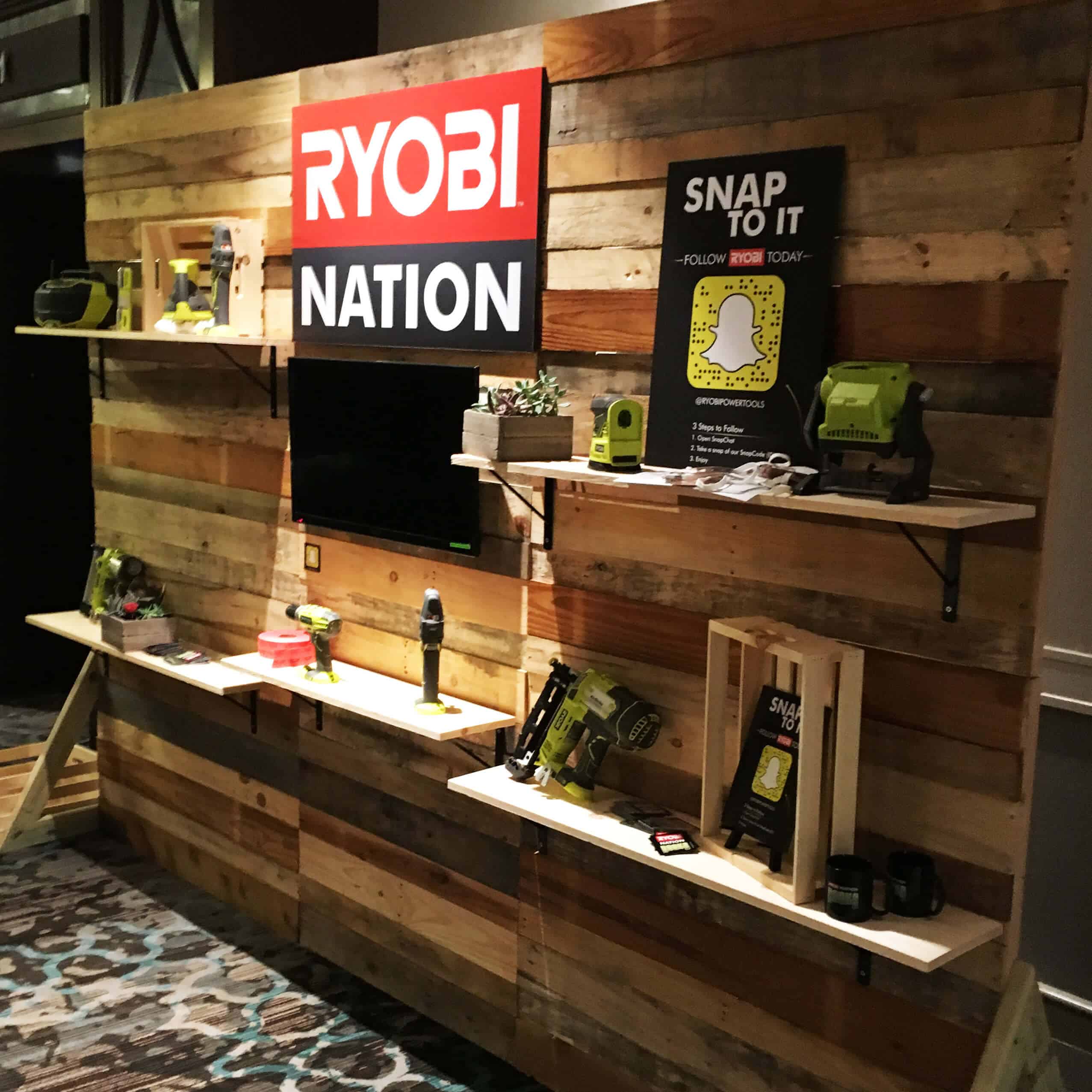 If you follow any part of the DIY blogging world, chances are you’re going to see the occasional post about “Haven” towards the end of summer.  And then after the first week of August you’re going to see some really excited and inspired bloggers out there fresh off their long weekend at Haven.  What’s this “Haven” they speak of?  It’s a DIY blogger conference that’s held each year in Atlanta where the big fish and the little fish get to mingle and learn all in the same pond.  And luckily, the big fish don’t eat the little fish, quite the opposite, “(little) fish are friends, not food.”

You can find a handful of great recaps about the conference here, but you’re going to notice an obvious trend very quickly… 99% of attendees are female.  For once in my life I am the 1%.  Just not the super rich kind.  Ha.  So what you’ll find below is the “Guy’s Guide” to Haven conference, as told by myself, Lazy Guy DIY. 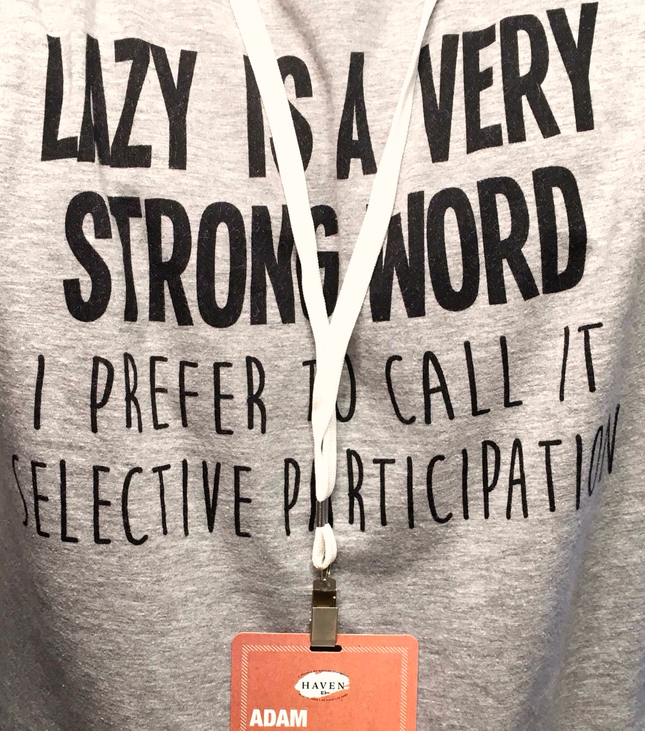 Be prepared to be one of the girls

I don’t mean you have to gal pal it up and change who you are, but Haven is a business and most of the program is geared toward women.  There are literally hundreds of women there and just a handful of guys.  The evening entertainment, the speakers, the giveaways and even the closest bathrooms are set up for women.  Why shouldn’t it be though?  Cater towards your market.  I’m not offended by a fashion show or a pink screwdriver set in my swag bag.  Just know if you’re a guy attending, you’re going to be a minority.  Almost every class I attended I was identified by the instructor as the token male of the class and for that I say: 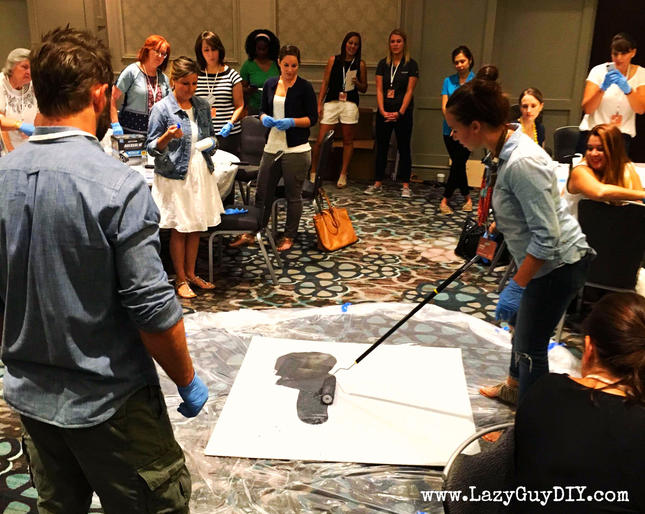 I’m an almost 6 and a half foot tall guy wading through a sea of women each day at the conference.  It sounds like a single guy’s dream, but it’s honestly a little nerve racking and awkward when you’re a happily married husband trying to strike up conversation with a bunch of women you don’t know.  You can’t help but immediately feel like that skeezy guy at the bar hitting on all of the women.  If you sit back and play it cool, guess what?  You’re just as intimidating to them, so you’re in wallflower city and hanging out by yourself.  So what did I do my first night?  I went to the bar (that was filled with bloggers), had a drink ($15 for a bourbon and ginger!), had a few star struck moments and then saw another person that looked just as nervous as I did.  So I asked her if she was a first timer like me?  She was, we talked a few minutes (exchanged business cards… bring LOTS OF BUSINESS CARDS, LIKE ALL THE BUSINESS CARDS!) and then from that moment on, I had at least one smiling face I knew each day of the conference.  I closed up shop pretty early on the happy hour and hit the gym.  I had just driven 8 hours so I needed to unwind.

Meals are one of the best times to network with other bloggers and force you to meet people.  Each morning I got up early and came down to breakfast right at the start time.  If you’re the shy sort (dudes aren’t shy, you’re a lone wolf!), it’s a good time to grab an empty table and then have people fill in or join a table with a low head count.  It will fill up soon enough.  Everyone is super nice and chatty and the conversation format is very standard, “what’s your blog name?” and “what do you do on your blog?”  It’s like clockwork every meal.  Then everyone exchanges business cards (see… bring ALL THE BUSINESS CARDS!).  Except, I always got two additional questions from everyone else at my table: “what’s it like being one of the only guys here?” and “where’s your wife?”

The only thing I can compare this experience to is when I first went to summer camps as a kid.  I didn’t know anyone, it felt like everyone knew the routine but me and I didn’t want to embrace the goofiness because cool guy here doesn’t want to look silly in front of strangers.  Throw that crap out the window immediately.  I didn’t fully immerse into summer camp until my second trip and that was after a long year of regret.  When I got back I knew people this time and fully bought in.  I actually ended up going back every year I was eligible as a camper, a counselor and then worked on the summer staff a few years in college.  It changed my path in life and I recognized this as being one of those defining moments.  Did I sing and dance to the Haven song?  No.  But I made sure my butt was front and center in every class.  I interacted and I made sure that I was memorable, not for being a token guy, but for being Lazy Guy DIY.  People recognized me from my website or from social media and I wouldn’t have known that if I sat in the corner quietly.  There’s a lot of self doubt when you put something out there publicly for all people to see and it’s a great confidence builder to have that assurance from strangers that what you have is something good.  So build on that confidence and…

Talk to the vendors

I bumbled through the vendor meet and greets the first day.  I barely talked to any of them and the ones I did talk to probably weren’t impressed with me.   Day two I was determined to not waste an opportunity and started fresh even if I had talked to the vendors the day before.  It became very obvious in my classes and networking that not only did being a guy make me a minority, but being a “builder” made me one as well… in a good way.  Surprisingly, a good portion of the vendors are geared towards builders.  Whether it was Home Depot, Ryobi (and their army of reps), Kreg Jig, DAP Products, Rust-Oleum or Rockler tools, all of these companies had more in common with what I did on my blog than a majority of the Haven attendees.  Icebreaker.  Talk about products of theirs you’ve used, projects you’ve used them on and any projects upcoming that you can use them on in the future.  These companies are paying big bucks to put themselves in front of you for a chance to put their product in front of your readers.  While as a new blogger, I might be intimidated to talk to a tool company, you would be surprised to find that these companies do their research on you before they go and they’ve seen your blog and know there’s an opportunity in speaking with you.  I was surprised when several vendors said they had been waiting to talk to me.  The conversation has actually continued after Haven with a few different companies and who knows, might lead to eventual partnerships.  It’s funny because one of the vendors flat out told me at one point that they are struggling to find “minorities and men” to represent their brand right now.  Which is strange to me because guys like to build stuff, but I guess there are only a few of us that like to talk about it.  Which brings me to… 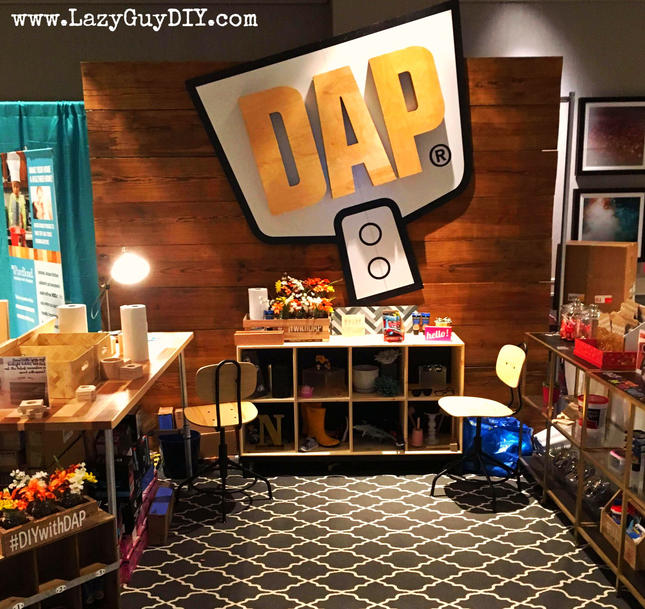 You actually aren’t the only guy there

Sure there are male brand reps around and a handful of spouses of bloggers, but there are legitimately a few prominent males who attend.  Frank from Glued N Screwed, Brad from Fix This Build That, Jamison from Rogue Engineer and Jeremy from Bower Power Blog are a few of the guy rock stars of the conference.  More impressive though, they are all really cool guys who went out of their way to talk to me knowing it’s a strange situation.  At one point, Brad, Jamison, Jeremy and myself were all at a table in a class being instructed by Ben Uyeda from HomeMade-Modern on Quikrete.  It was the most guys assembled in one place at the same time at the conference.  Probably.  Don’t be afraid to seek out other guys and strike up conversations, they seriously will be happy to have “bro talk” rather than hear more stories about decor (no offense decor ladies!).  While you’re having conversations though…

It’s okay to be an “expert” too

Some of the best conversations I had with people is when we were sharing our tips and tricks we’ve learned in our ventures.  I’ve been blogging for less than a year and yet I had a few people hanging on every word I was saying about my blogging experience and things I’ve found that have worked for me.  I came to Haven to learn it all because I felt like I really knew nothing about this whole blogging thing and in that moment I was shocked to learn I had something to offer as well.  It’s an odd feeling when you talk to another blogger that has millions of website views each month (that you follow religiously) and yet you can offer them advice on something they might not have ever thought of before.   The beauty of the Haven experience is not just in the information you gather from the classes but from the interaction of people who all have a common interest.  There’s no competition between bloggers here.  This is an incredibly embracing group of people that want everyone around them to succeed as well.  It’s a giant think tank and network of friends who can help you in ways a google search can’t.  No blogger is too big to talk to the little guy (even if I awkwardly shouted “I know who you are!” when Katie Bower introduced me to Jen Woodhouse.  Sorry Jen!).  Well, unless you’re John and Sherry from Young House Love… they’re blogger royalty. 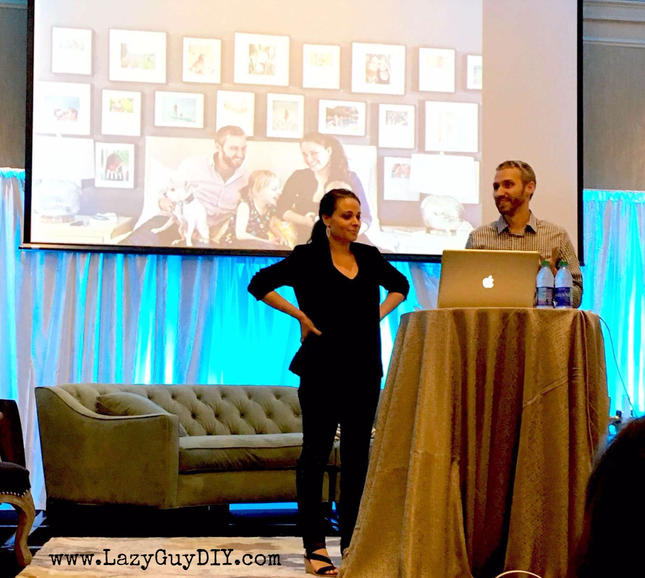 So bottomline, is Haven worth the investment?  Absolutely!  I took a great mix of classes to learn about new products and improve my website.  I’m even still learning stuff from my mentor group several weeks after the conference because we keep in touch through Facebook.  My social media analytics showed that my reach was up 5,000% the other day.  That’s not a typo.  5,000%.  Holy Schnikes!  With the knowledge learned, the friendships and relationships made and oh man… the swag you get to take home… Haven is 100% worth the trip, even with an 8 hour drive.  Just know that if you’re a guy going, check your ego at the door “bro” and embrace the experience.  There’s nothing else like it, but you’ll never know the half of it if you approach it as “he versus she”.  Enjoy it to the fullest and oh yeah, if you come next year, come find me, I’ll be the tall guy in the sea of ladies wearing a funny graphic tee. 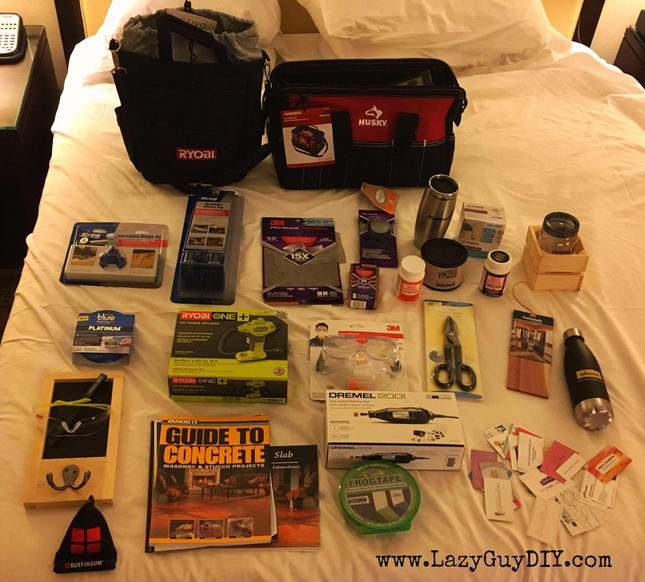