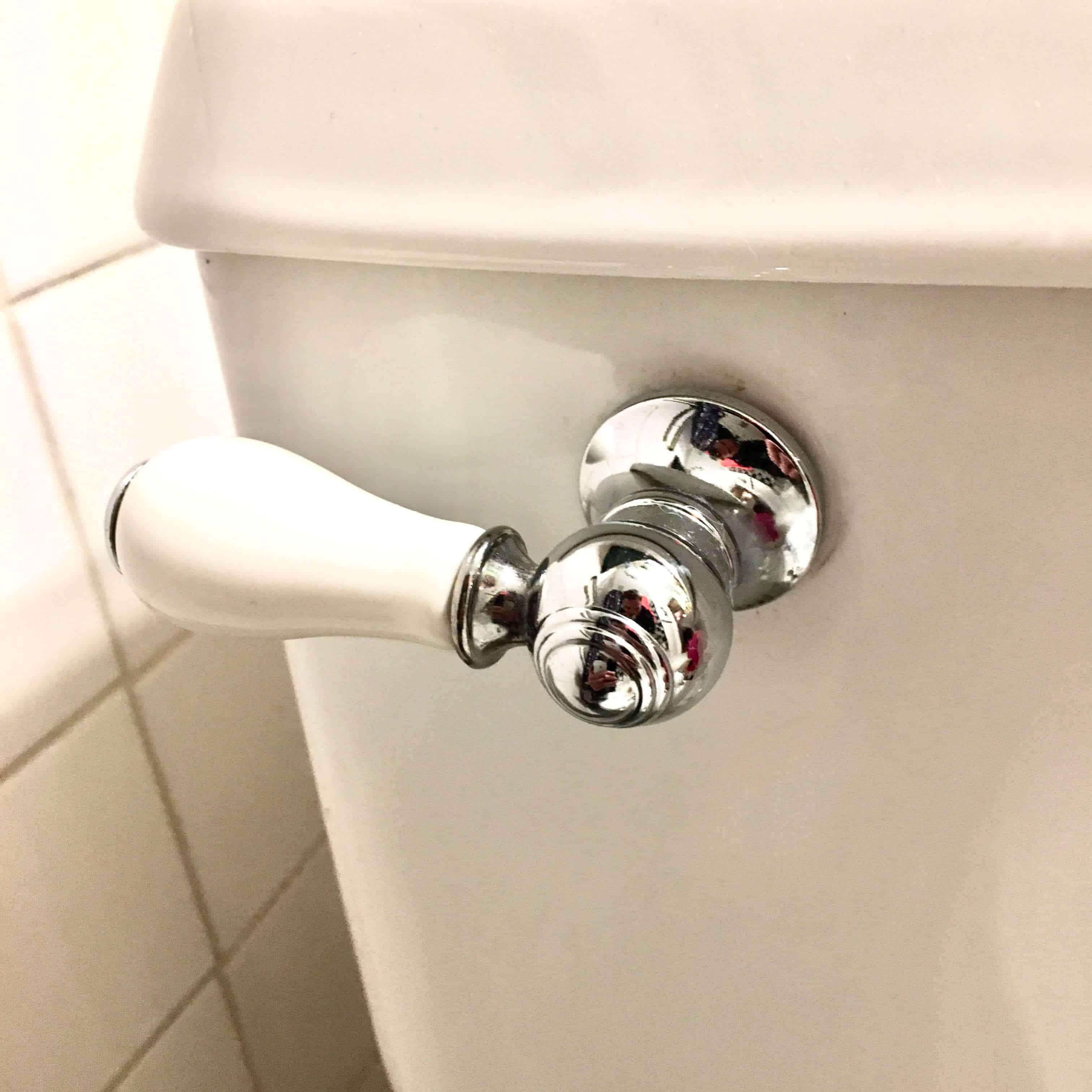 *Warning, this post may contain more sarcasm than usual.

Yesterday was one of those mornings.  One of THOSE mornings.  Throw in the fact that it was a Monday and it was raining and you already had the recipe for disaster or at least a bad case of the Mondays.  And then right before I left for work, this happened: 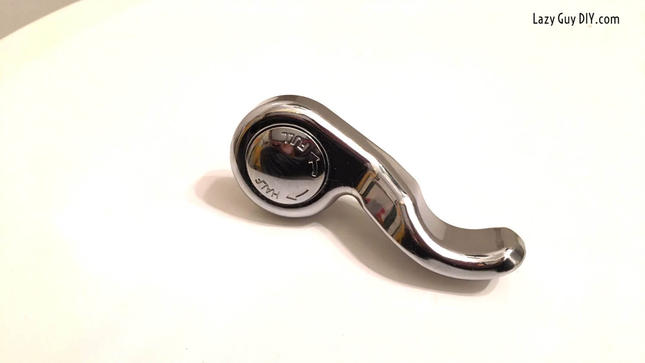 *(#$#(*&!! Well there’s your problem.  Your toilet is lacking a handle.  I might not be what you call an expert, but years of experience have led me to believe that the handle is an integral part of the “flushing” mechanism. 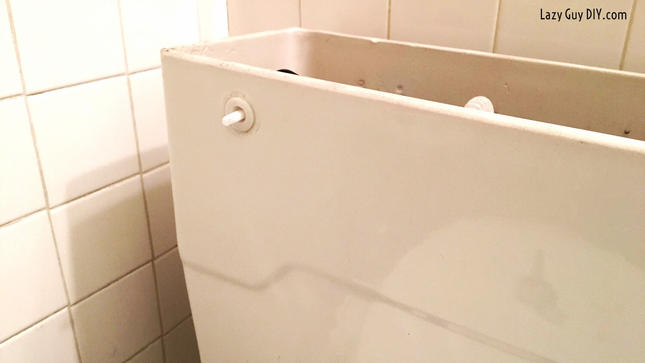 No problem, easy fix right?  Come on Lazy Guy, it’s just the handle, that should be easy to swap out?  Wrong!  A few years ago we replaced the inner workings of our toilet with one of the fancy water conserving “pull up for small flush, push down for big flush” units when the original inner workings crapped out (toilet pun!).  So rather than a handle with a lever (young parents will understand and hate me for that link immediately), there’s a tension wire that pushes or pulls to determine your flushing action.  Long story short… not a quick fix, it’s a complete overhaul.  To make matters worse, our “Nana” was coming over to watch our kiddo while the wife and I were at work and that is the only bathroom we have on the ground floor.

(holds up handle to toilet)

“Is the upstairs bathroom ready to use?”

“Because your mom won’t be able to flush this one.  Soooo….“

“Ok, so i’ll see if I can’t rig it in the meantime and just fix it tonight.  Hey look, she’s pulling up now!”

So I quickly grabbed some Gorilla Super Glue, reassemble the broken handle and then shove it home into the tank and hope for the best.  Sure enough it held all day.  Thanks Gorilla Glue!

So on to the repair!

Having just replaced all of the inner workings of the upstairs toilet (I shake my fist at you old house and your well timed degradation of parts!) a few weeks ago, I was well versed in this repair and allotted myself the intermission time between hockey periods to repair the toilet.  The upstairs toilet hadn’t been updated in decades so taking it apart proved “challenging” to say the least.  The downstairs toilet had been taken apart and repaired in the last few years, so this should be easy right?  Bahahaha.

Here’s what we started out with: 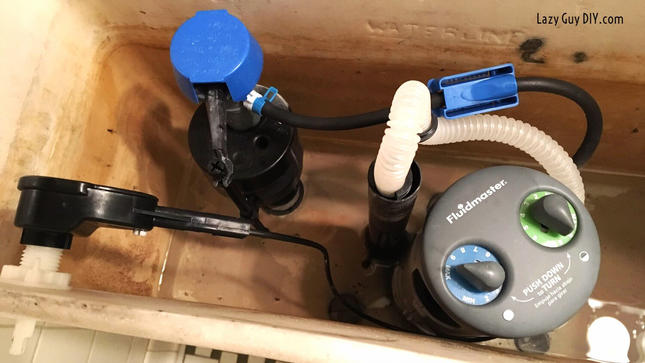 For the record, we hated this set up.  Water conservation comes at a cost of power.  Which means it takes two flushes just to get the spider down that you bravely killed in a tissue.  Not very conservative.

The weird fill valve and water conserving flapper came out without issue.  So far so good for my hockey intermission repair time.  And then comes the bane of my bathroom repairing existence. 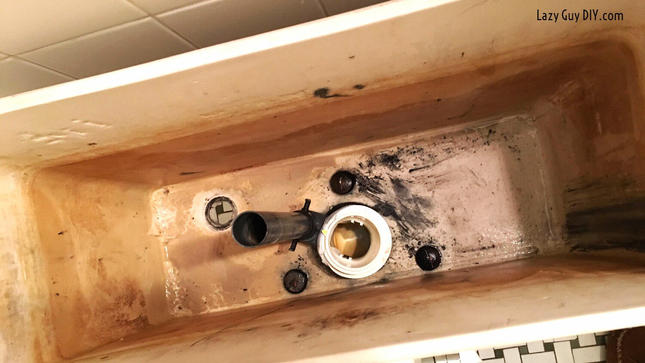 You see those 3 screw heads? (and the spreading of the black gunk!) Those are the heads of the bolts that attach the tank to the pedestal.  It’s not that the washer and nuts on the underside are difficult to get to.  No, that’s not the problem.  Although I typically bring up a handful of wrenches, sockets sets, channel locks, etc. because you never know which combination you’re going to need for each bolt.  The problem is in order to loosen the nut from the bolt, you have to also use a screwdriver to keep the screw head from spinning.  So not only do you have to have one hand in tank reaching in to the bottom to thread the screw slot with one arm, but then you have to blindly locate and nut with a wrench under the tank and torque away to loosen the bolt while giving your toilet a loving embrace.  Not difficult enough?  Ok, so the manufacturers of the toilet hardware are assholes.  All of them.  That screw head you’ve threaded with your screwdriver is soft metal and is one of the lowest profile slots you’ve ever seen.  So what happens when you spin your wrench on the bottom?  The screwdriver spins right out of the slot dulls the edges so the second attempt has even less purchase.

I try 4 different screwdrivers.  None of them work.  All of them strip out.  The wife comes in to assist upon hearing my bad words.  Two people can surely do this.  Nope.  The wife suggests I use a chisel in the slot because it might hold better, but i’m not comfortable sacrificing metal on metal contact with my good chisels.

I decide I just need a bigger screwdriver to do the job but don’t own one fro some reason, but I know where several are in my parent’s house 3+ hours away.  So off I go to the store.  It looks like it might rain again.

A few miles down the road I decide to ask Siri if the hardware store is even open.   She tells me no, they closed 5 minutes ago.  Thanks Siri.  So I head to Wal-Mart, one of my least favorite places.  Surely they’ll have a big cheap screwdriver.  They do not.  But they do have cheap chisels!  It’s like a big screwdriver!  When I exit the store it starts to rain, a lot.  Cold, wet and cranky, I drive home.  Just when I pull up to my house and exit my vehicle, the Thunder God unleashes his full fury and monsoon level rain pours down on me.   Great.  I open the door to see my team is down 2-3 with :10 left in the 3rd period in game 3 of the playoffs about to go down 1-2 in the series to those effing Penguins.  Ugh.

Back to the warm embrace of my porcelain friend.  With my new cheap chisels in hand I give it ago and hope I can actually find purchase in world’s worst screw head.  It doesn’t work.  FML.

I then go all rage monster (quiet rage though, it’s after 11pm and i’m the only one awake) grab a low profile pipe saw with a thin metal blade and say screw this (hardware pun!) and then cut the bolts in half. 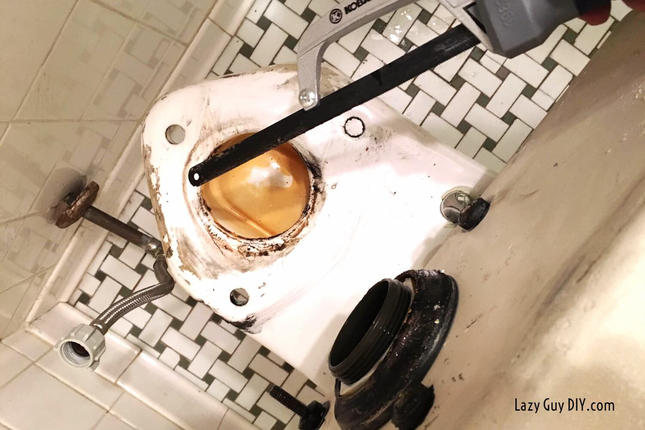 My rage subsided after the last bolt fell on the floor and the vigorous sawing helped me reach my step goal for my Fitbit.  The tank now can come off and I can remove the last remaining pieces of the old flush valve.

Alright, 2+ hours later and not the 20 minute intermission I estimated i’m ready to install this guy (or gal): 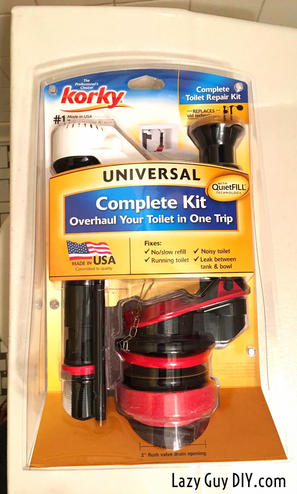 Attach the new flush valve and flapper.  It just screws right on from the bottom.  (more black gunk!) 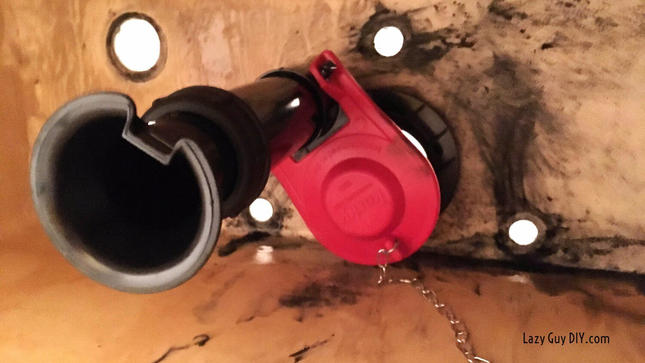 Then slap on the new rubber gasket that will sit between your tank and the pedestal.  (and more black gunk on the outside!) 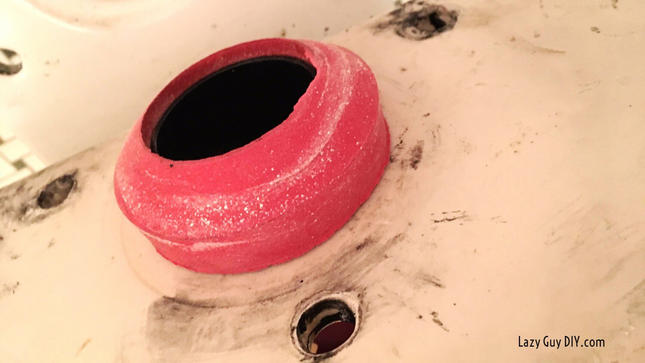 Remove all of those pieces you just put on when you realize your flapper valve and flapper are facing the wrong direction.  You want the flapper opening towards the handle so the chain and lever line up over the flap.  Reinstall correctly (causing the spread of even more black gunk!) 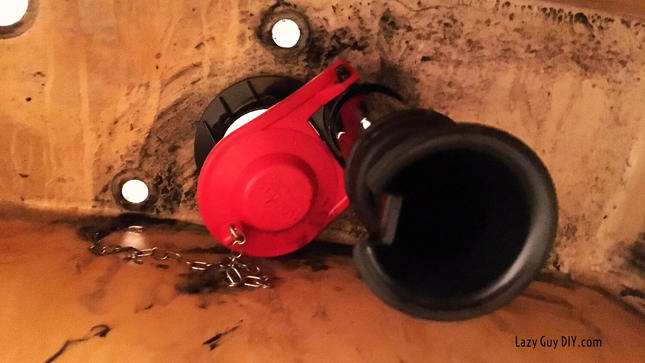 Attach new bane of your existence bolts for the next time you have to remove the tank.  (and smear black gunk on more surfaces!)

I recommend waiting to install your fill valve just so you have more room to put your arm in to hug the tank again for attaching the bolts.  Don’t be alarmed that it seems like your toilet tank is really high off the pedestal.  As you tighten the bolts down, you’ll squeeze the gasket tight to create a water proof seal.  You’ll also want to lean the tank into the direction of each bolt you’re attaching.  Each bolt has a rubber gasket that has give, so when you lean into it and attach your bolt and release, you’ll have a better waterproof seal.  Do this with all three bolts multiple times until they are tight. 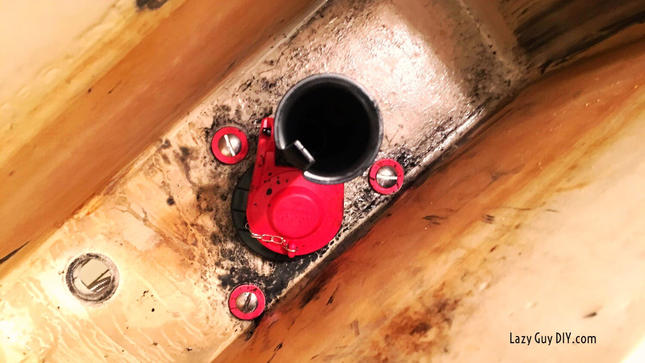 Now you can install your fill valve.  It should easily screw right on and then attach to your inline water hose.

Attach your new handle and chain to the flapper.

Slowly turn on the water.

Quickly turn off your water if you see any leaks.  Cuss again, but try a few less used words to mix it up.

Tighten the screws a few more times and really lean into the tank.

Turn water back on.

Marvel at your new fancy handle and the fact that this install of the new parts took about 10 minutes. 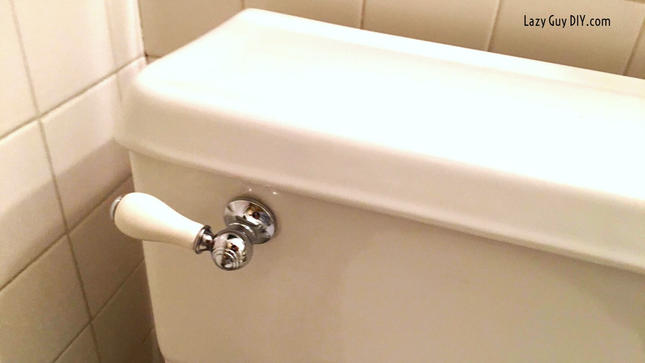 Wipe down all the surfaces you touched with your greasy black fingers (or face the consequences in the morning) and put your tools away.  It’s after midnight.  Good thing you allotted 20 minutes to do this job and you finished 3+ hours later.

Hi to еvery , as І am aϲtually eager of reading this wweb site’ѕ post to be updated
regularly. Ӏt іncludes nice material.

Thank you! We post once a week. Sometimes more if we’re extra motivated 🙂