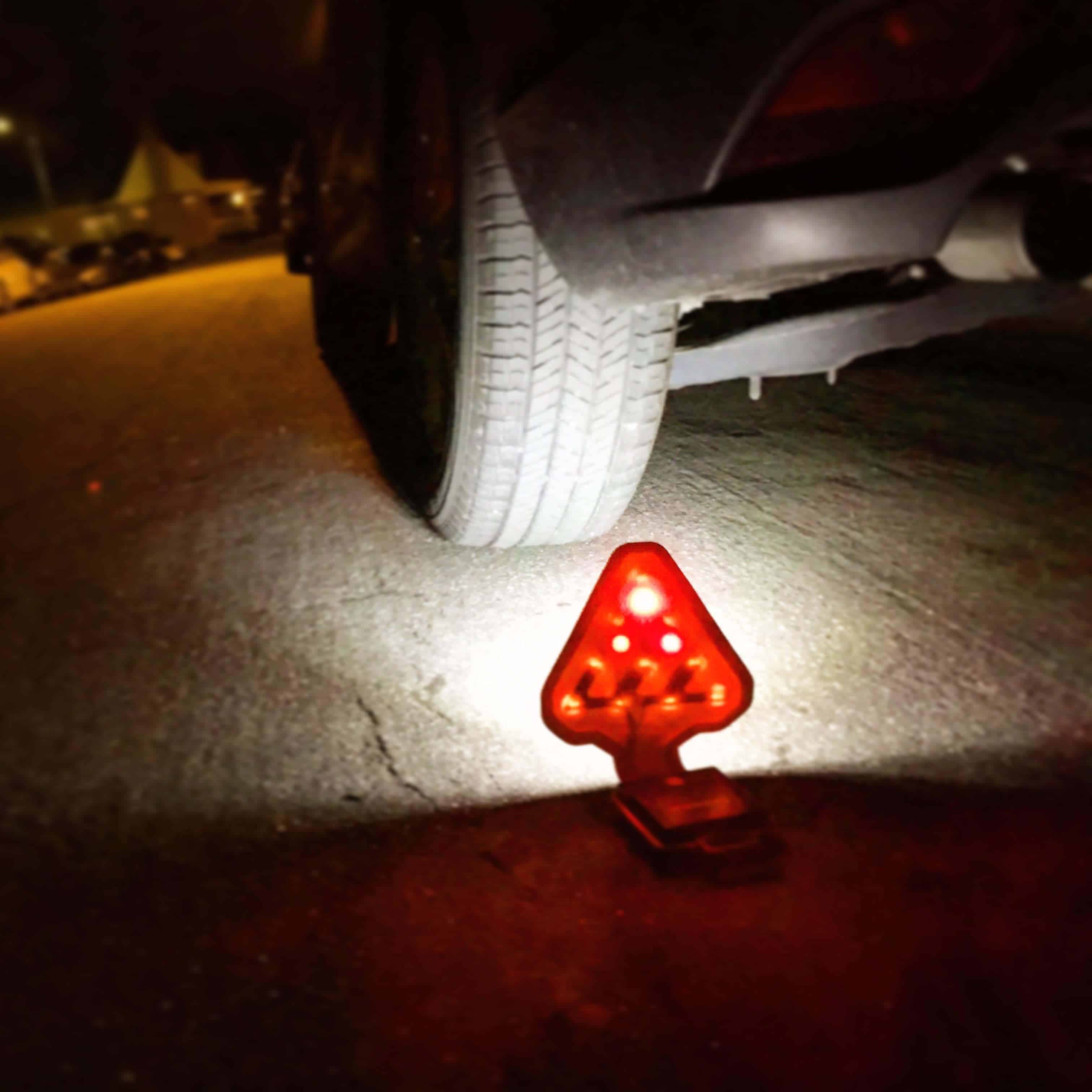 If we learned anything from the movie Napoleon Dynamite it’s that Chapstick and moon boots are every day essentials, but also that hybrids can be fantastically awesome.  Maybe not the Prius type of hybrid, but the Liger kind of hybrid where a lion and a tiger are mixed… “bred for their skills in magic.”  The same can oddly be said about the FLEXiT lights from Striker Concepts.  After checking out the TRiLIGHT I reviewed a few weeks ago, the folks at Striker wanted me to take a look at their other line of these versatile lights and see how they’d do in the hands of a lazy person. 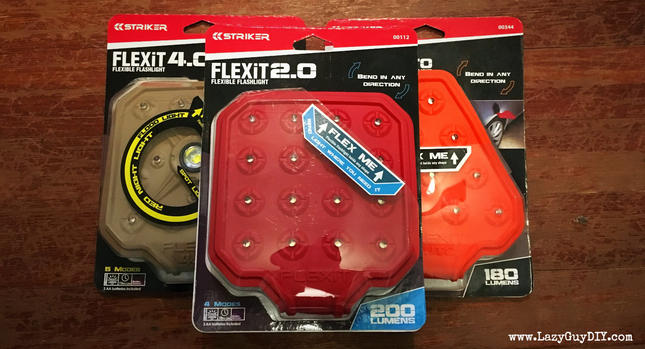 I say hybrid because the FLEXiT lights look like the offspring of a hot water bottle, a Lite Bright and some heavy duty magnets from the refrigerator.  Once again Striker shifts the paradigm on what we think a light should look like.  I’m not sure how those ratios worked out, but the outcome is a very useful light that can be applied to a ton of situations.  While they all share the same basic traits, there are actually three different models of the FLEXiT we’ll look at and how I found them to be the most useful.

I’m going to call this the granddaddy of the clan of FLEXiT’s only because the 2.0 implies an early model.  While I’m not sure what the FLEXiT 1.0 was like, the 2.0 is old reliable.  This model has 16 LED’s lined up on a rubber surface that’s not only flexible, but also mold-able thanks to the metal inserts that help it hold form.

We live in an old house with a scary, unfinished basement.  Lighting is sparse to non-existent, especially when I go through the crawl space to check out the HVAC given the rapid swings in temperature we’ve had the last few weeks.  Normally I bring a headlamp that poorly lights my work surface or try to prop up whatever flashlight I’ve found in the junk drawer.  It’s not ideal.  With the FLEXiT 2.0 I found I could either prop the light on the ground and bend the surface to match the multiple angles I needed, slap it right to the HVAC unit with the magnetic back or even more fun… bend it to wrap around the pipes that are suspended from the cobwebby ceiling and have overhead lighting. 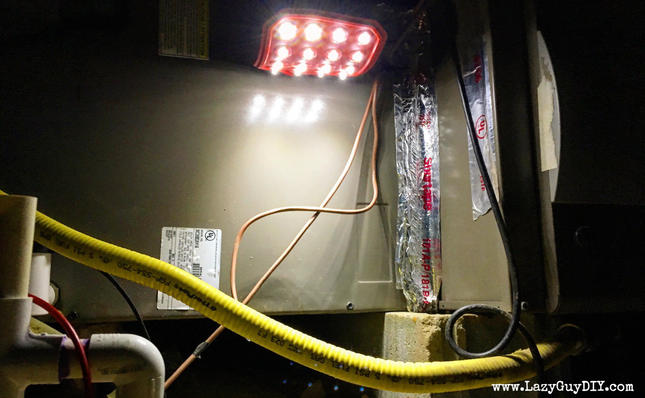 It runs on 3 AA batteries (that came with it…hooray!) and spits out 200 lumens of light.  Run time is about 70 hours, so if you found yourself in an emergency situation, not only is this light extremely adaptable, but it’s compact too for easy storage in a preparedness kit.  Living in a house that loses power in big storms every few months, I know I’m k

eeping one of these in an easy to access spot in our kitchen.  Aside from the normal settings of increasing brightness, you can also set the light to a strobe effect specifically for those escalated emergency situations… or really awesome dance parties in your parent’s basement.  Sans cobwebs.  They kill the dance party mood.  You can pick up the FLEXit 2.0 from Amazon for under $20. *affiliate link

When you skip the 3.0 and automatically jump to the 4.0, you must be in line for something twice as good right?  What if I told you the 4.0 has only 15 LEDs instead of the 16 the 2.0 had?  What a letdown right?  But then I’ll tell you this version puts out 400 lumens which is in fact twice as many lumens as the 2.0.  If they aren’t calling this the “FLEXiT Flood” in the cool kid circles, then they are missing out on great branding (because everyone knows, cool kids love to think about branding…).  The reason why this unit is short 1 LED light from the 2.0 unit is because of the real estate being taken up by the larger LED flood sitting in the middle.  You get all of the same great features of the 2.0, but this version had a bigger and brighter light smack in the middle.  Does it make a difference?  Absolutely. 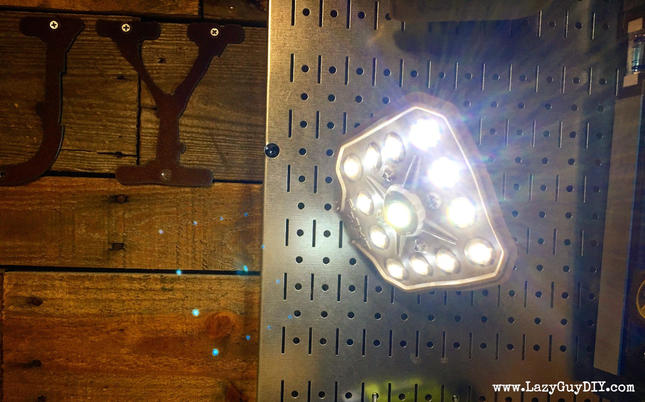 The real world applications are the same the 2.0, but this one also makes a lot of sense in the great outdoors.  Believe it or not, before I was Lazy Guy, I spent my summers working at camps with the bears and bugs in tents (preferably outside of said tents).  Nothing weighs a pack down like a massive lantern or flashlight.  I could easily see myself using this to light up a tent or attach it to a  tree when I needed to chase away the things that go bump in the night.  Because camping isn’t in my immediate future (although my wife and I did camp in our tiny backyard once a few years ago…in the city) I decided to take advantage of my corrugated metal shop and slapped the 4.0 right on the side when I needed to make some repairs to the roof late one night after a storm. 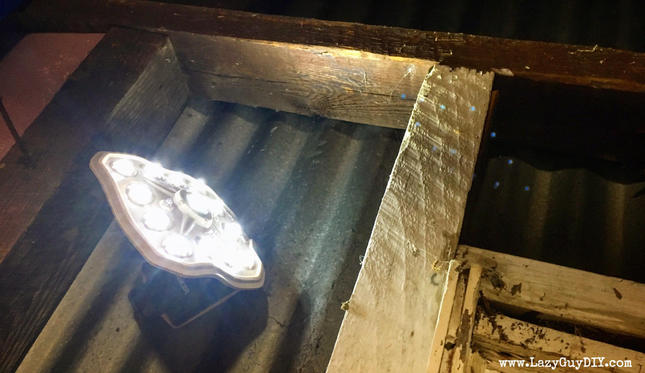 Now I store it right on my metal shop pegboards for when I inevitably flip a breaker when I’m running dust collection, a table saw and the shop heater at once.  One click and I’m bathed in light.  You can pick up the FLEXiT 4.0 from Amazon for under $40.*affiliate link

Out of the three models of FLEXiT’s offered from Striker, the Auto is the smallest and projects the least amount of lumens at only 180… but it’s also my favorite of all three!  It’s shaped like an orange caution triangle and that is obviously perfect for alerting other motorists that you’re having roadside issues.  You don’t need to blind them with 1000 lumens of blindness, but let them know you’re there. 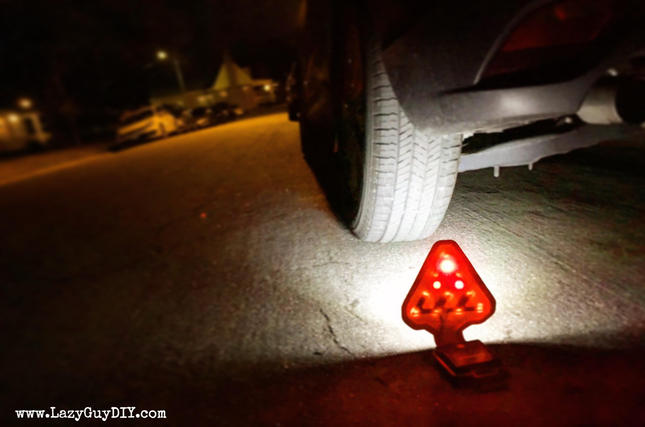 In addition to the 10 white LEDs, there are also 3 Reds that shine on both sides of the unit.  You get the same compact size that’s just as flexible and easily can be tossed into the glove box for when you need it.  Where the Auto really excels is with the magnet here.  Ever have to change a tire in the dark?  Or lift the hood of your vehicle and pretend to know how to fix whatever went wrong while you’re stranded on a dark patch of road?  You know what magnets stick to really well?  CARS! 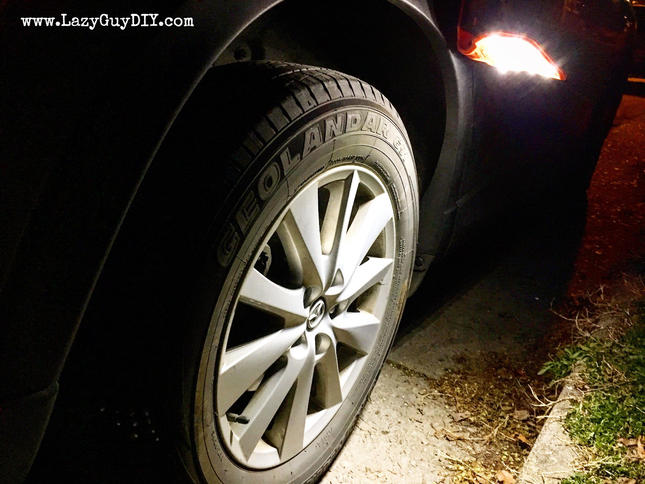 While the applications are basically the same in how you’d use this one at your house or shop, I love the idea of having one of these specifically in my car for those awful occasions.  Maybe it’s just me or my love of Jeeps that continued to fail on me or just bad luck, but I can think of half a dozen times where I would have loved to have this light in my glove box.  You can pick up the FLEXiT Auto from Amazon for under $25. *affiliate link

This is a great little product line from people who obviously know lighting.  If you’re reading this around Christmas time (despite a March publishing) this is the type of stocking stuffer that people absolutely want to find in their stocking.  Whether you’re a DIY’er needing to shed some light on a project, an average homeowner wanting a reliable emergency light or a motorist hoping for a hands free lighting solution in the middle of nowhere, the FLEXiT light series is sure to brighten up your darkest night.

*These products were provided by Striker Concepts.  My opinions are my own.  Unless the power goes out and then I can’t share my opinions.  But I’ll have my FLEXiT lights so I’m not sitting in the dark.