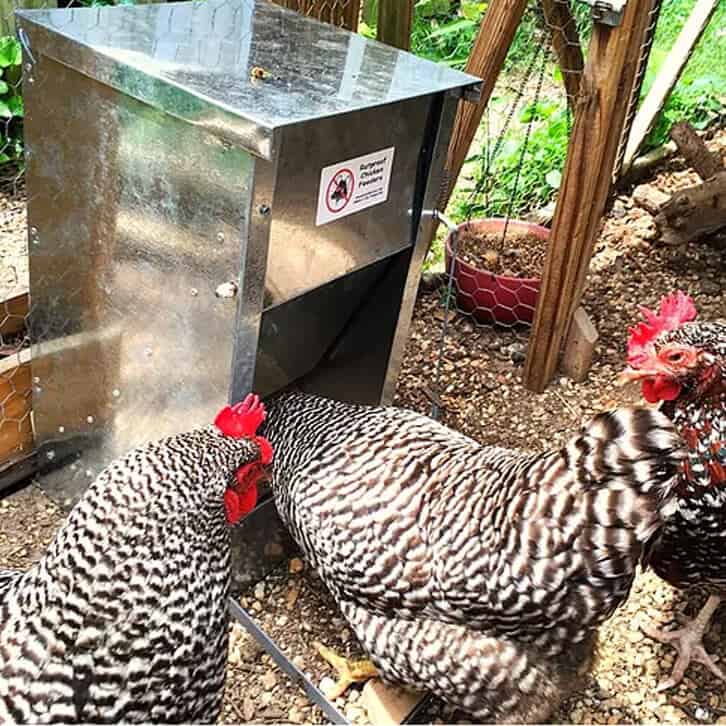 So I mentioned a few weeks ago in my “take back the garage!” post that we discovered…err confirmed a rat problem. We attempted to fight the small dog sized terrors with traditional methods but it wasn’t going to matter as long as they had a buffet of chicken feed to eat during the day.  The girls currently get free range of the yard while we’re at work which means they also have open access to their feed all day.  We lock it up at night when the rats are supposed to be nocturnally active.  Well these rats adjusted their schedule accordingly and we could see them scurrying around during the day.  Gross.

Politely asking our current guests to go away and never come back might work if the city was in short supply of rats, but it’s a city… with alleys full of trash cans and such… so yeah… lots of rats and critters running around (oh the joy of urban chickens!).  There’s always going to be a new tenant to fill that vacancy.  Sort of like random rental house on our street that inevitably has a barking dog.  We can give them dirty looks as we walk by and continue to steal their Amazon and Blue Apron deliveries, but when they go another one just like them will move in.  Prime real estate.  Ha.

The neighborly strategies weren’t going to cut it, so it was time to take away their reason for sticking around… and no we didn’t burn the rental house down, we’re talking about the rats here, we took their food source away with a treadle feeder.  We ordered one from the Carpenter Shop for a little over $60 plus shipping costs.  It’s close to 15 lbs so shipping is going to cost a bit.  If you’re lucky like us, it will arrive upside down despite what the box’s instructions clearly say. 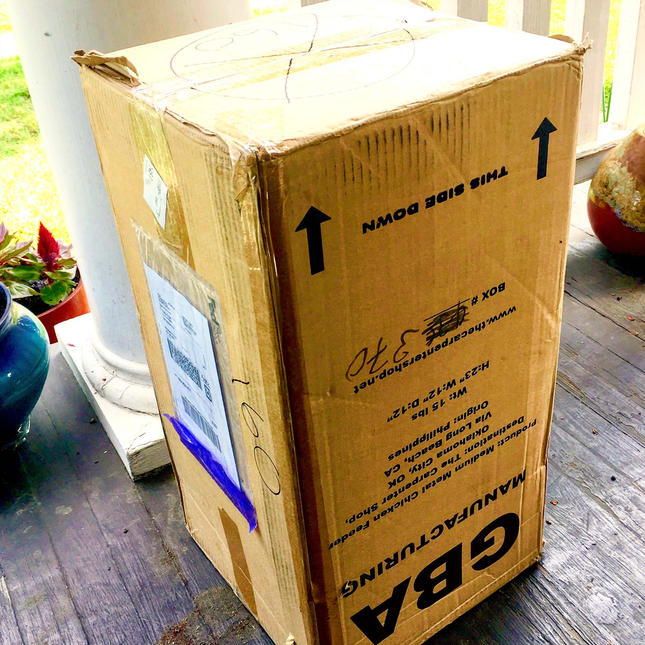 Luckily it survived it’s upside down delivery that was set on our porch with a resounding metallic clang.  I should note my sister works for one of the competing delivery companies who dropped this off and within minutes of posting this picture I got a call from her to make sure it wasn’t her company.

Setup was easy.  10-15 minutes tops with a wrench and a socket of I think 5/16ths to assemble.  They do have a whole schedule included that explains the best way to train your chickens.  We followed it and had positive results immediately.

Within minutes of installing the feeder (per the schedule included) the girls were eating away and when they weren’t we saw a family of rats frantically scrambling around for food they could no longer find. 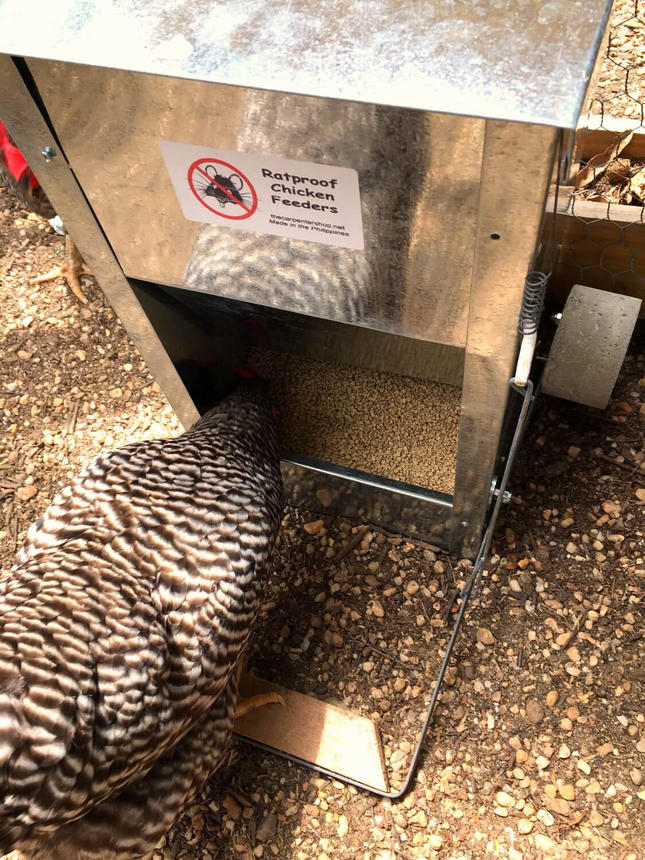 So how does it work?  There’s an arm with a cement block counter weight attached to the storage bin.  Your chicken steps on the arm (one can do it by themselves) and the door flap opens to give your chicken access to their feed.  The door swings inward as opposed to outward and is apparently safer for your chickens.  The last thing we need is concussed hens walking around when their friends jump on the arm when they walk by and have them get smashed in the head.  Granted, they could also have their head pinched in the door as it closes, but it’s not forceful enough to do more than scare them.  You will also notice there’s a spring on the side, that spring loads the door to remain closed so our rat/squirrel friends don’t push in on their own.   After a few days of use, a couple things really stand out:

“This restaurant has a lot of hot chicks.” 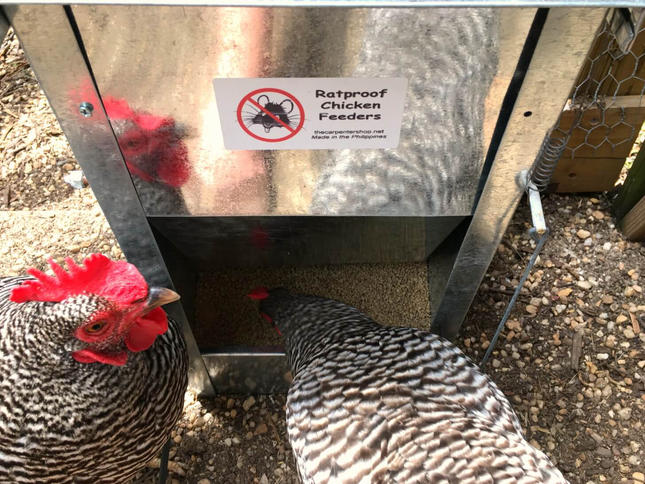 Also, the amount of feed we go through has significantly decreased already.  That’s not because our girls aren’t getting fed either.  They are happily using their rat free feeder.  We simply aren’t feeding all the animals in the area be it rats, squirrels or other birds.

One thing to note, the whole apparatus is made of metal, so when your chicken inadvertently steps off the treadle arm that bad boy is going to slam shut and make a loud metallic bang.  Enough so that the unsuspecting chickens pop up in the air a few feet each time it happens.  It’s ok.  It’s funny.  We like to laugh at the expense of others.

I’ll make sure I do a long term update especially with the change of seasons, but as far as i’m concerned right now, I won’t be using any other type of feeder any time soon.

I bought a couple Grandpa feeders and the squirrels had no problem stepping on them and opening the door to eat. How will these be different ?

I haven’t tried the grandpa feeders before, but I know these have a smaller platform that might make it more difficult for the squirrels to put their weight on. We have tons of squirrels in our area and I had never seen one use the feeder.

The door is spring loaded and there is a huge honking counterweight. Together they keep most of the critters out of the feeder. Then there is the treadle, set way back for this very reason. The trade off is that the feeder isn’t for small birds like bantams unless you do some tweaking. Problem is that setting the balance lighter and the treadle closer means it isn’t as rat proof as it comes from the factory. The feeder has failed in forest settings with dozens of squirrels on hand but generally squirrels are territorial and live alone and fight for… Read more »

Thanks Al! It’s a great product!

I have a lot more then two squirrels, ground squirrels are all over the place.

So true! That wide treadle is why even tiny ground squirrels can use the Grandpa feeder. https://www.youtube.com/watch?v=SQ69d1aFGLA