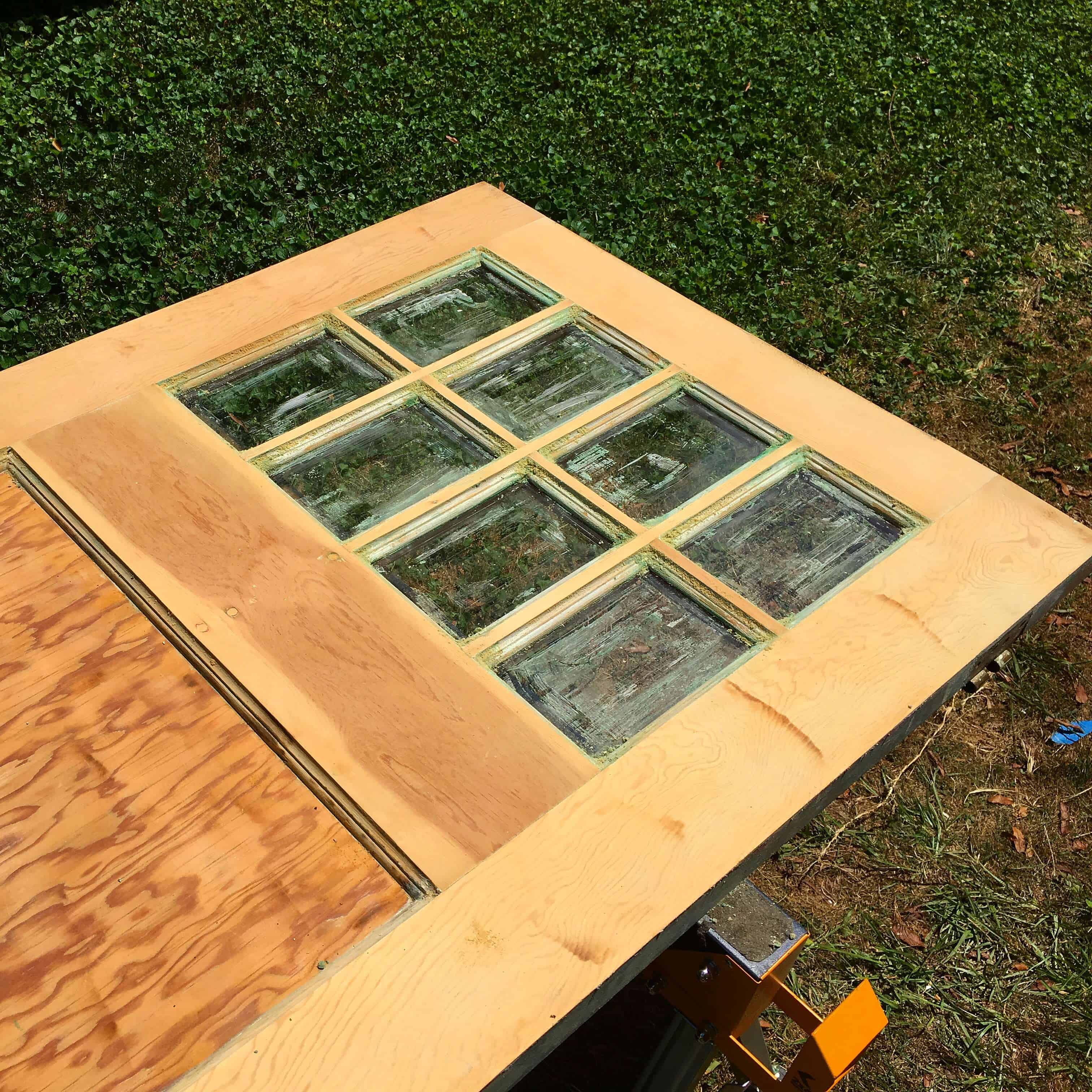 So I’m faced with a moral dilemma…  I started stripping.  No seriously.  Stripping.  Plus, I’m getting really good at it, just ask my neighbors who see me working on my craft through their windows on weekends.  I’m not ashamed of it.  I do it out in the open.  Mostly on my front yard and porch. 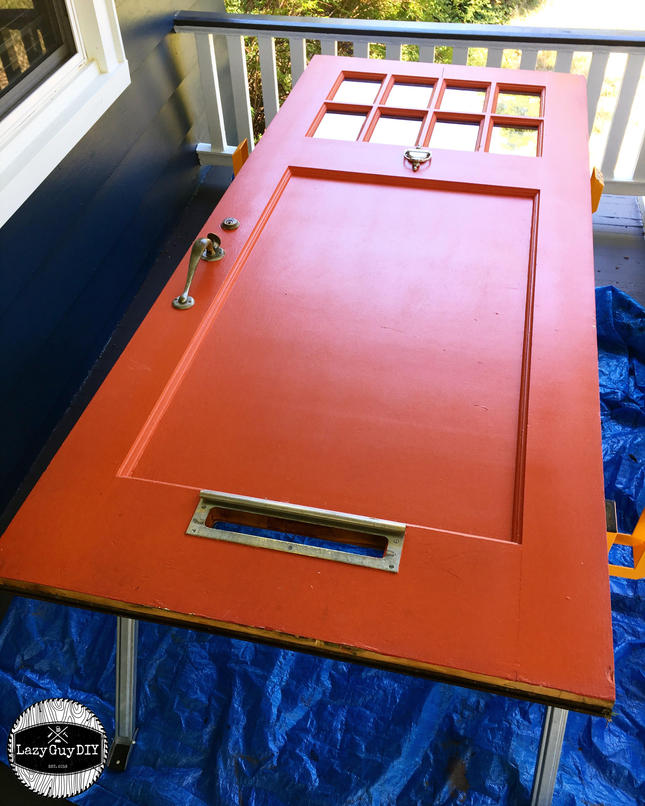 It’s something I choose to do, but there are a lot of people who frown upon and detest the actual act and think less of me for it.  They feel like it’s dirty and toxic to the community (think of the children!).  Other people like the tradition and spectacle that comes with it.  It’s flashy and people immediately take notice.  Ultimately, I told myself I would only do it once out of necessity (and because my wife pressured me to do it), but now that I’ve gotten a taste for it, I want to go back for more.  I once considered stripping in college to make money on the side, but my parents raised me modestly so I got a safe job selling Khakis at The Gap instead (beer money is beer money).  You obviously don’t need a ton of training to be successful at it, but there’s definitely a craft and an attention to detail that separates the amateur strippers from the pros.   When I strip, I try to keep my family involved.  I take and send pictures as each layer comes off right down to when I finally get down to the bare au natural.  Heck, I even share those pictures on social media (flaws and all).  When I finish, I want everyone to appreciate the work that goes into this.  I want my hardware to stand proud, from the knob to the knocker.  I even want the mail slot to shine.  Heck I even encourage my wife to do it too.  The family that strips together… 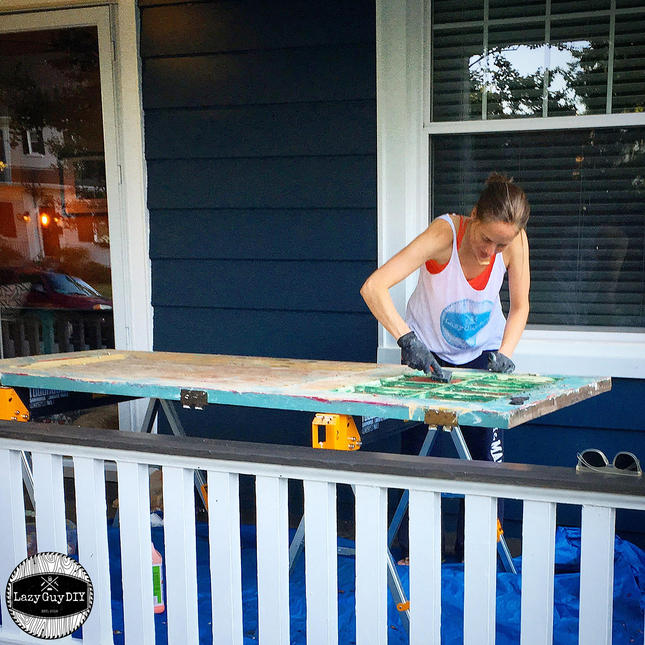 Stripping the paint off an old door down to the natural wood is something we’ve wanted to do since we decided to change the color of our house.  Because let’s be honest. We had a serious issue now.  My wife and I both attended colleges in Virginia, but our house was now blatantly the colors of the University of Virginia.  She went to undergrad at William and Mary which makes them a rival to UVA because they are rightly more prestigious, but UVA gets all the snobby academic attention in the state.  She then went to Virginia Tech for Vet School and well… that’s like a Yankees and Red Sox level of rivalry (to our state at least).  Then there’s me… JMU grad.  We aren’t rivals in athletes or academics to UVA… but we are in close proximity.  And those preppy brats that wear bowties to football games with boat shoes and croakie sunglass straps were jealous of our population of purple and gold undergrads that are close to 70% female… They felt entitled to them.  Let’s leave that rant in Charlottesville though and get back to the topic at hand.  Now that we’ve stripped the door, there are no regrets (other than slightly from the ambiguity in the stripper text above) only a new found love for the beauty that was hidden below that awful UVA orange paint.  So how did we do it?

Before Stripping The Paint

If you have pets, children, nosy neighbors, bugs or a HVAC running, chances are you’re not going to just rip off your door and get to work.  This is a process that’s going to take a few days to completely finish.  Which was the cause for one of my biggest hesitations for jumping into this prior to my wife saying “oh this is happening”.  No one ever posts how long it takes to strip an exterior door.  The most obvious reason why is because results will obviously vary.  Especially as the layers of paint add up and oh yeah… the tiny trim work.  Just make sure you have a safe workspace (out of the direct sunlight, tarp down, well ventilated). 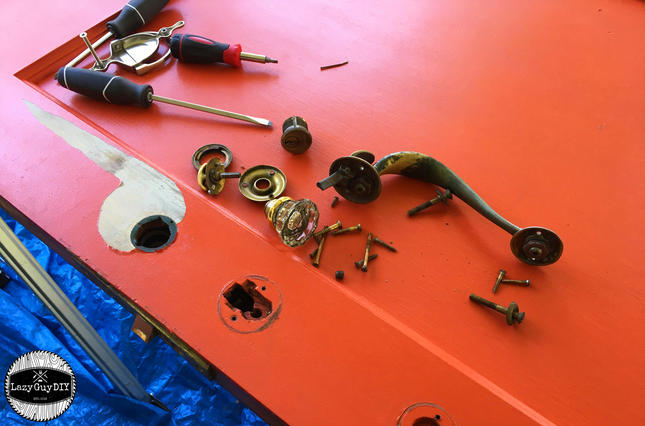 Pop those hinges, strip off all your hardware (again with the stripping) and make sure you know exactly where all your pieces went so reassembly is easy.  The last thing you need is the hardware off a door and have it never work again because you lost a machine screw  from 1926.  If your other side of the door is finished, tape off anything you want protected and stuff any of the holes you don’t want the chemical running through. 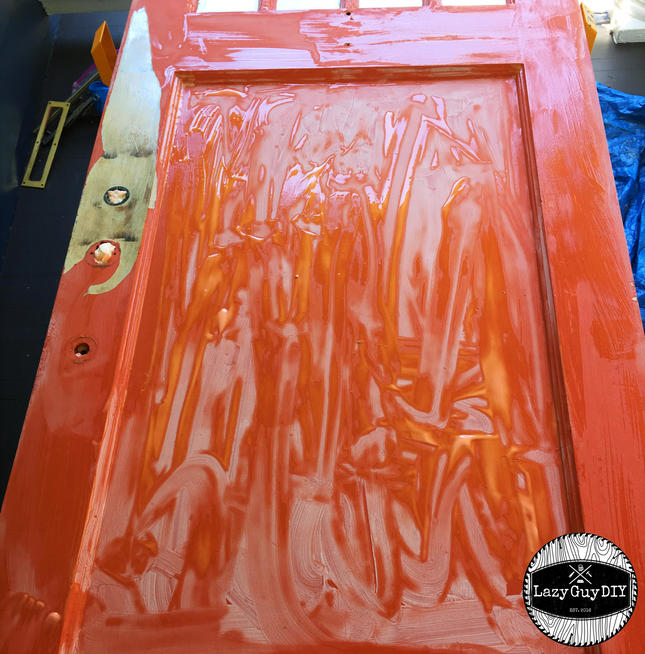 Start coating your painted surface with chemical stripper.   At first I was like maybe I’ll just lightly brush on the chemical like I’m gently basting a turkey.  Ney.  Coat it on thick.  Get sloppy with it.  There’s no such thing as too much.  I mean, don’t spread it like Jelly on a PB&J, but feel free to use a lot of it.  Within 30 minutes the fun starts happening.  For best results, you can wrap the coated surface in plastic (Saran wrap works!) as it keeps the chemical from drying out if you’re working outdoors. 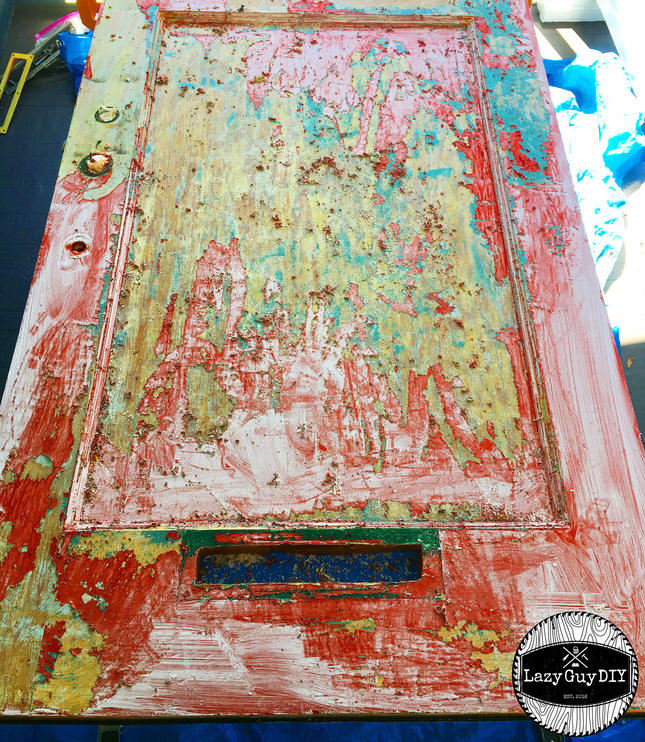 Once you see a good portion of the paint start peeling up after you’ve waited as long as your excitement could keep you… start scraping.  With the plastic scraper you just need to barely apply pressure and the layers start sluffing off like the charred remains of a marsh mellow S’more gone wrong.  It’s incredibly satisfying.  I started scraping all of the removed paint off into a container that I can safely dispose of when I’m finished (or hide in someone’s basement for chemical warfare).  At least it smells like citrus. 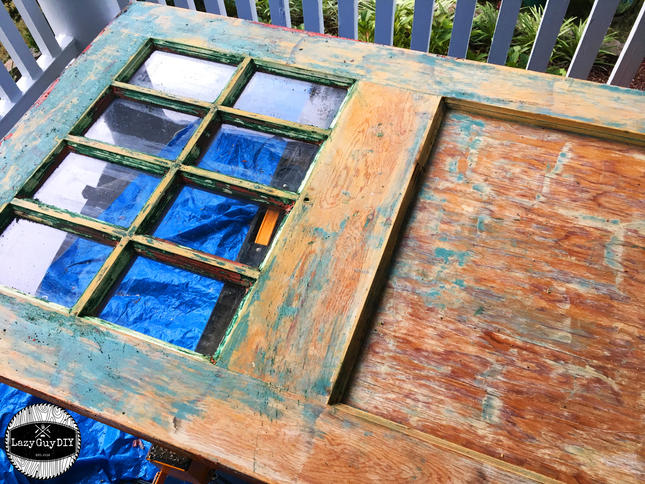 Well… don’t actually rinse.  Because there were so many layers of paint on our door, I had to reapply and repeat the process at least 3 times.  The picture above is actually after only two sessions of applying chemicals and scraping (hey, sometimes you’ve just got to get back on stage).  It doesn’t have to be perfect though, you can sand out anything that’s missed later.  Or leave it extremely rustic/thrifty chic looking (which is truly lazy guy style… oh this is taking too long.. let’s call this chic and trick people into thinking this is intentional).

Step 4 – The Devil Is In The Details 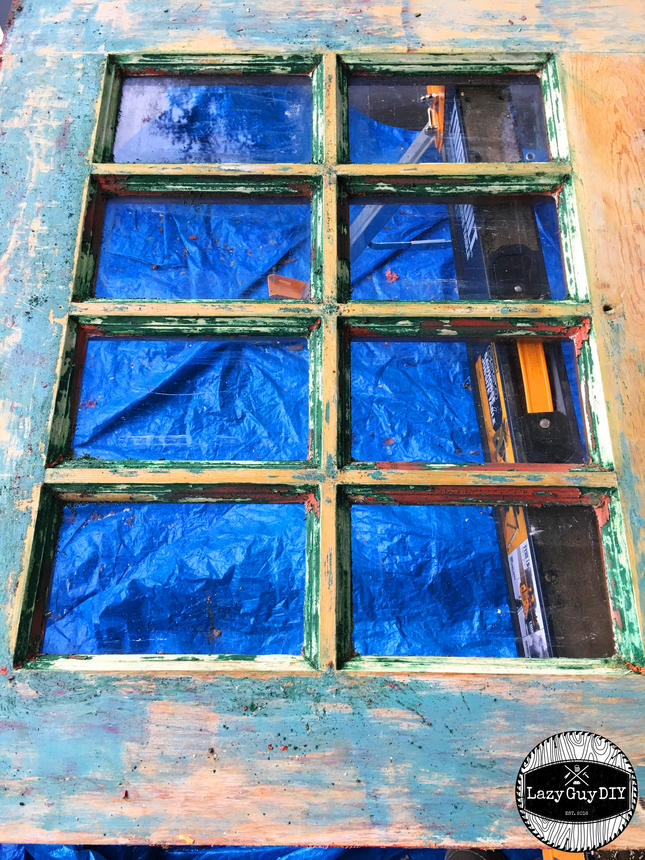 The big pieces are fun to strip off (shoes, shirts pants…)  The tiny little detailed pieces are terrible (what’s a G-string?).  At least for my door it was terrible.  I spent two days alone trying to get all the paint out those little nooks and crannies.  I applied and reapplied the chemical stripper but it was a frustrating battle.  I got a lot off with little wire brushes.  It was like I was an archeologist on a dig brushing away the layers of time.  Not the fun kind of archeologist like Indiana Jones, the boring kind like Dr. Alan Grant prior to flying to Isla Nublar. 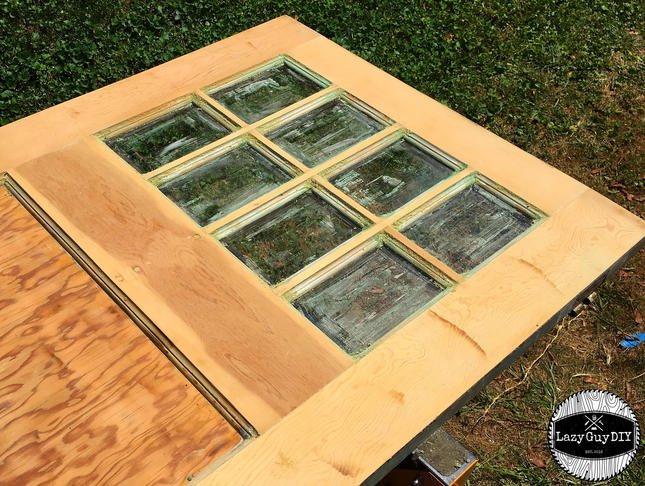 I ended up using a metal scraper to break through the tougher sections, force chemical stripper in the hard to reach places with a toothbrush and then scrape and sand little sections for hours.  It sucked.  It sucked bad.  I’ve since had people suggest using a heat gun… my wife might have suggested it as well days before my DIY friends… but did I listen…? 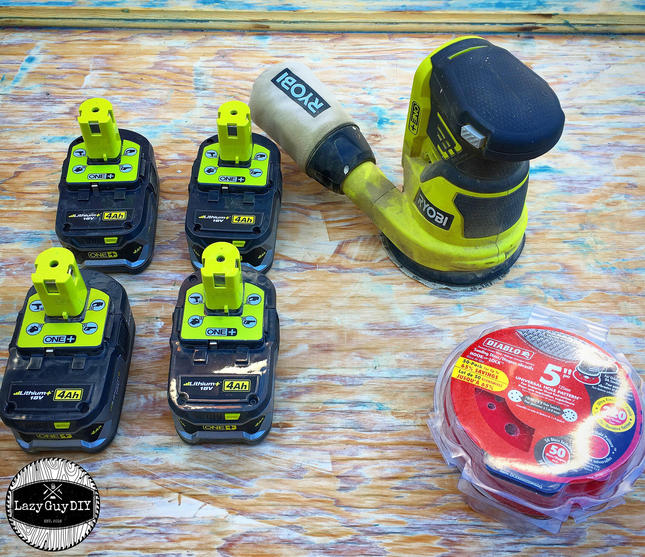 Using a combo of Random Orbit and Sheet Sanders I sanded out most of the remaining paint.  I started with an 80 grit disc and worked my way up to 220.  Don’t just jump from 80 to 220 grit.  You need to take your time and use at least a 160-180 grit in between for the smoothest finish. 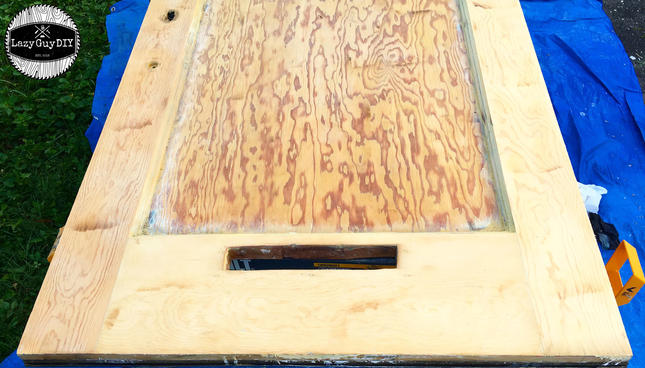 You’re only going to be able to get but so close with a power sander… so unfortunately it’s back to the detail work.  Using sheet sandpaper run through the same progression of grits by hand.  For the particularly stubborn areas of trim I wrapped sandpaper around a dowel rod so I could work within the grooves and not sand away the shape of the trim.  Again… this isn’t fun.  But it pays off like a fresh roll of singles. 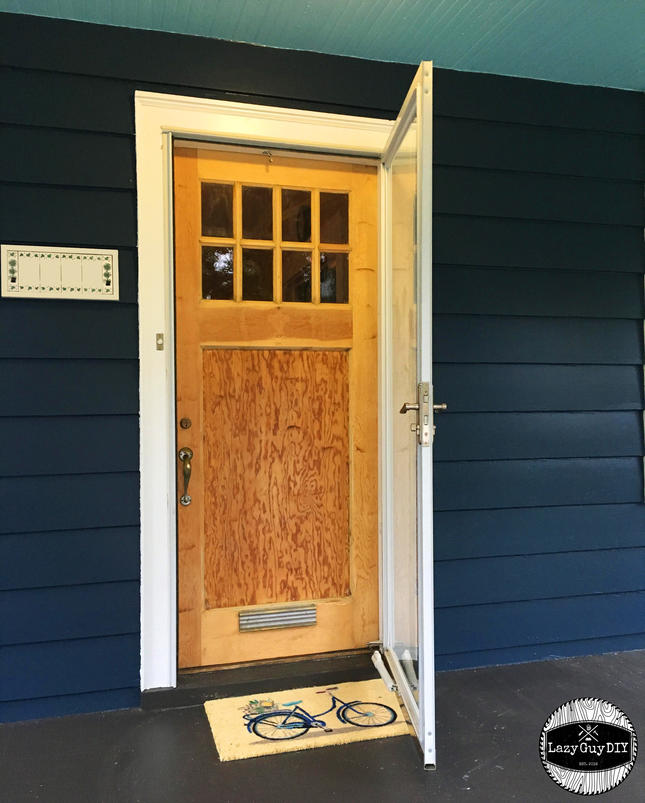 Once the sanding is finished, it’s time for the other fun part.  Whether you decide to stain it first or just leave it bare and natural, that’s up to your own preference.  We ended up keeping the lighter shade and coating it with an outdoor sealant.  We are in the process of replacing the door hardware (it’s been re-keyed too many times) but we are keeping the same traditional look.  The wood will of course darken over time a little, but we think it suits our house much better than that awful UVA orange.  So that’s it.  You now have officially learned to strip from Lazy Guy DIY.  Go and take your talents on the road.  Don’t be ashamed of your new talents.