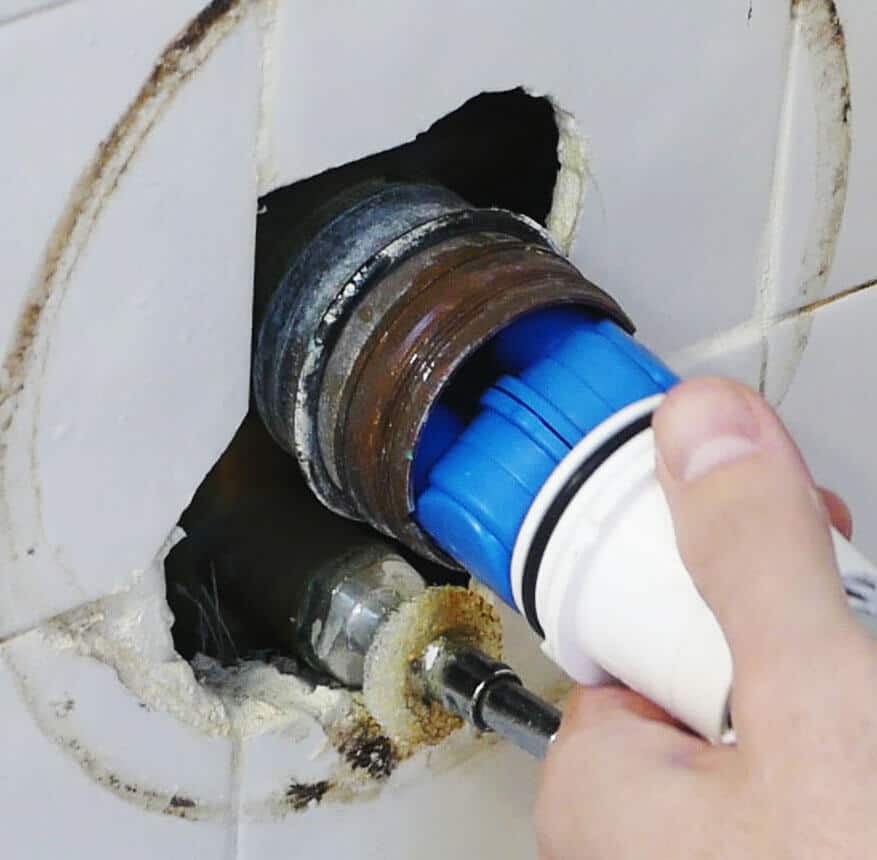 It started as a slow drip.  Maybe 1 or 2 every few minutes.  Then it progressively got worse over the next few months.  It felt like an Edgar Allan Poe “Tell Tale Heart” beating beneath the floorboards, but instead, it was the constant drip, drip, drip coming from the bath tub spout every time you went into the bathroom.  It got so bad that one of our cats decided she would no longer drink out the water bowl, instead her water cooler time would now be spent drinking out of the bathtub.  Have you ever had a cat try to claw through a bathroom door to get to her water fountain when you’re trying to do your business?  It’s bad enough when a toddler won’t let you be, now the cat too? 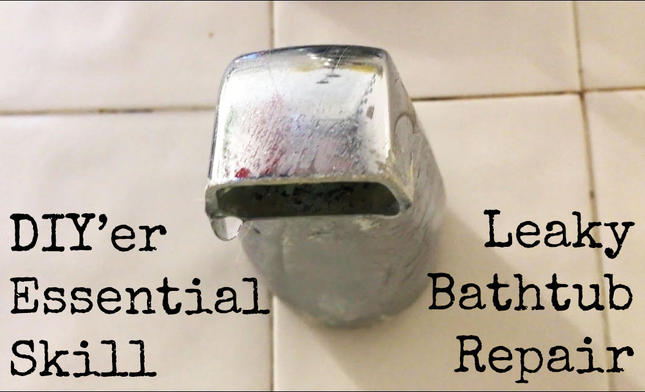 In good news… fixing a dripping bathtub spout is actually very easy.  Of course, if you’re like me, you might make it worse by thinking you should address other minor issues and turn them into major ones.  Full disclosure, fixing the dripping (which is the topic here) is something most homeowners can easily do… but I tried to get too big for my britches and toyed with another minor issue and ended up having to call a plumber in to fix something I majorly screwed up.  More on that later.

If you’re anything like us, you have shower hardware installed that’s been there for decades, so it might not be easy to discern the exact make and model.  For ours, I could see it was a Delta Monitor series, but there was absolutely no way to tell what the exact model was.  I had to do some searching on the web, but through process of elimination, I figured out I had a Monitor 1400 series.

Things to take note of when figuring out your hardware model is how many handles does it have?  One hot & one cold or a single knob or handle (to rule them all!)?  What kind of diverter does it have (the thing that switches the water flow from bath to shower)?  Is it a push button, spout pull, third knob?  It makes a difference.  The diverter is honestly how I was able to figure out which model I had because Delta no longer uses the push button platform.  When you have your model pegged down, the good news is… you most likely only need to replace the cartridge.  Which is generally under $40 (hooray!), but sometimes can be difficult to find (boo!). 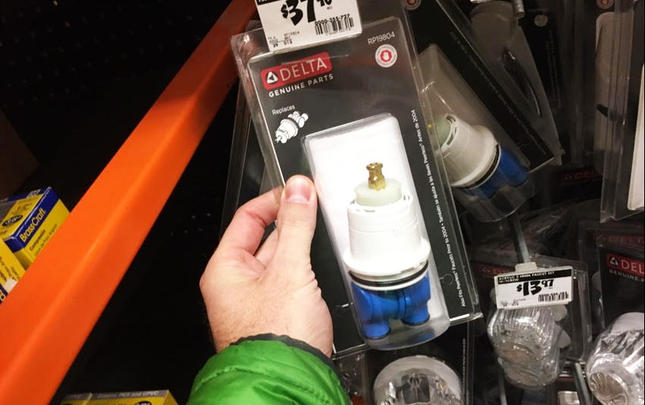 Local big box stores have a mediocre supply in stock my city, so you might do better looking online.  Pay attention to the years the cartridge is good for also.  The Delta Monitor had two models with a cut off day around 2004 which is when they changed the on handle connection.*worst case scenario, you can also disassemble the hardware and take the old cartridge into your local hardware store to match it up.

Here’s where your pre-existing DIY skills get put to the test:  Do you know where the water shut of valve is for your bathtub?  Do you have an access panel?  I lucked out and had one that was easy to open up and turn off the water.  If you don’t have an access panel, you’re going to need to find the main valve (which is actually very important to know in case of an emergency) for your home.  With that turned off go back to your tub and turn it on to bleed the line of any remaining water.  If they water is still flowing then you done messed up A- Aron.

Back to the drawing board or check the lefty loosie, righty tighty rule for turning off the water.  Also keep in mind, if you turn off the main water valve the rest of your house should know so you don’t get yelled at in case of a bathroom emergency or someone is trying to do a load of laundry.  I’m not saying it happened to me… but you know what the ramifications will be.

Here’s where the fun begins, if you’re lucky and you have a single handle for turning on the water, you should be able to knock this out in a few minutes.  Before you do anything though… close the drain!  The last thing you want is for little pieces to go down into the abyss!  Remove the handle (usually with a hex key or a screw or both!) and save your parts. 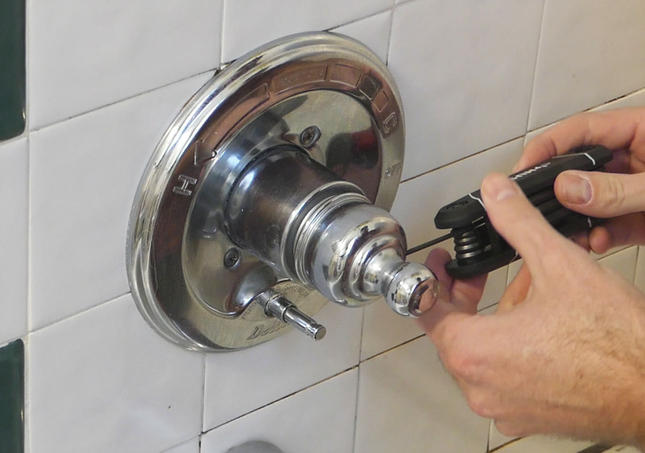 With the handle off you should be able to easily remove the screws (they are long!) from the Escutcheon.  Which I had to look up the name of.  You know… the Frisbee shaped metal plate that goes behind the handle. 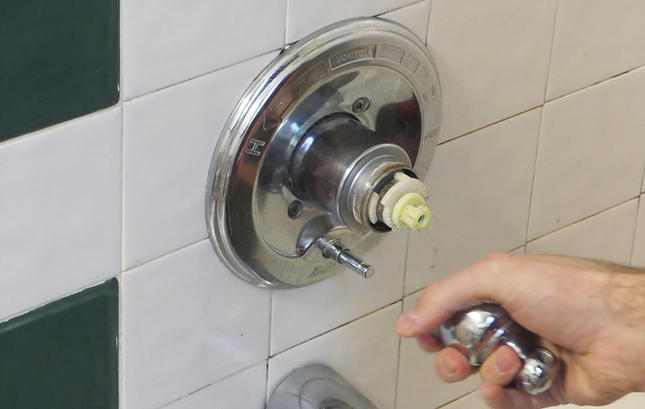 Keep in mind, this might be sealed with silicone to keep water out, so you might have to pry it up, just know that you’ll need to reseal it after you’ve replaced to cartridge.  Also, be careful if you’re prying the plate off the wall, you don’t want to crack your tile. 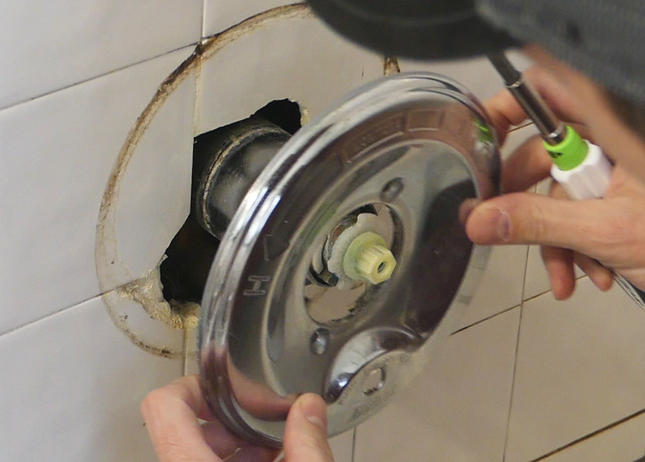 With the Frisbee plate thing (not the official term) removed, you can now remove the Stop Tube.  It’s a metal sleeve a few inches long that slides right over the cartridge.  It should slide right off.  Easy part over. 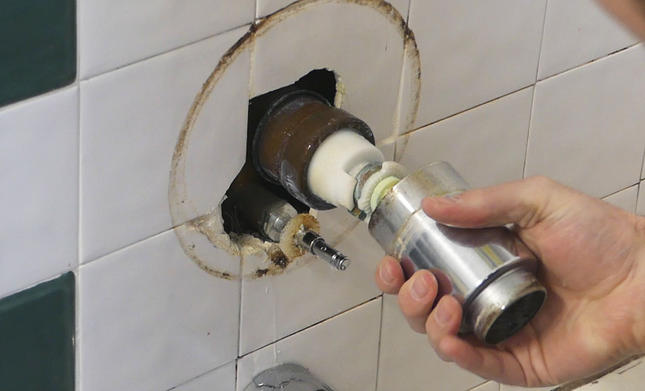 In order to replace the cartridge you’re going to need to remove the threaded ring that’s probably had several years’ worth of water corrosion.  It would make too much sense for this ring to have a hex shape or something that a pair of channel locks could easily grab on to, but then the Stop Tube wouldn’t slide over it. 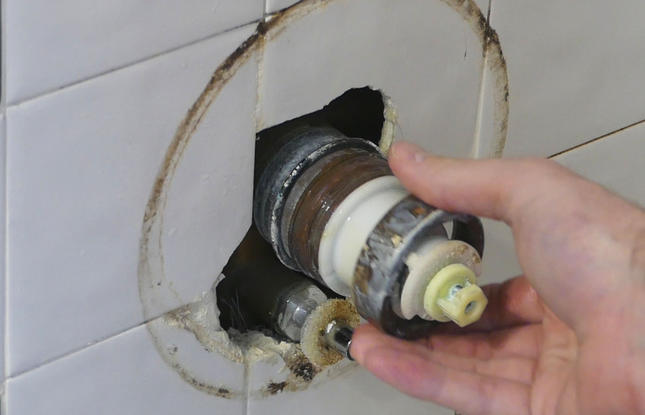 I ended up picking up a nifty little tool at my local Home Depot to help from Crescent (wrenches, not the rolls) that’s a self-adjusting pipe wrench (*affiliate link).  It was worth every penny.  Plus I squirted a little WD-40 around the ring before I went to the store to help break down the corrosion. 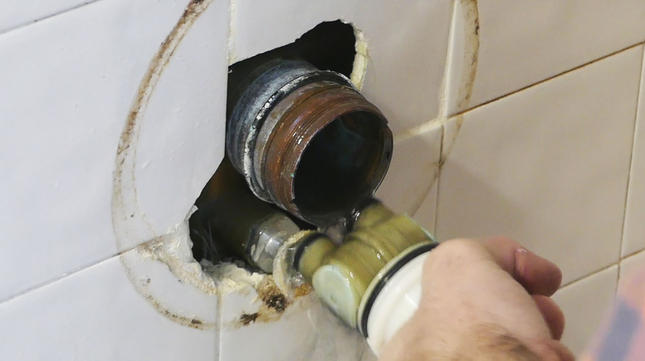 With that ring off, the cartridge slips right out… mostly.  I had to wiggle the cartridge out on my shower.  Take a look for any build or that might be in the pipe or any damage to the O-rings around the cartridge, that will let you know why you probably had a case of the drippy spouts.

Step 4 – Out With The Old In With The New

Now that you have the old cartridge pulled, it’s time to put the new one in.  If you’re an old fart it’s time to pull out your reading glasses because in the tiniest font ever, written in white on white is the designation for hot side and cold side on the cartridge.  If you forgot which side has hot water, it’s generally on the left. 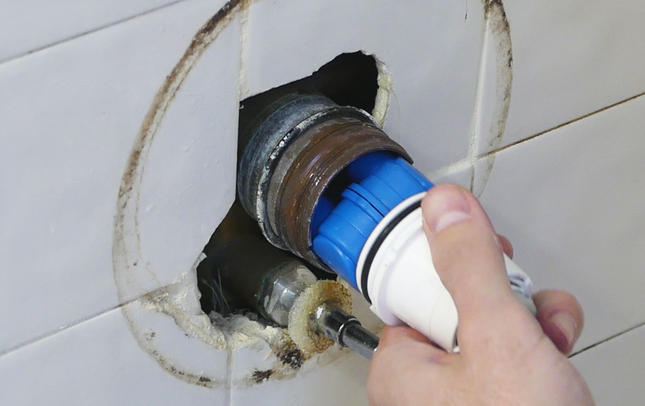 Insert the new cartridge firmly, then start reassembling the hardware.   You’re basically just taking the last few steps and following them in reverse so I’m not going to deep dive too much here.  You are going to want to fully assemble and then test your work before you start permanently sealing the plate. 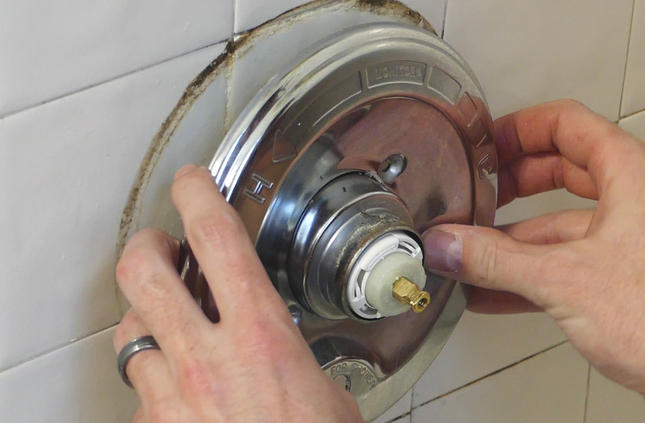 If you turn the water back on and the leak has stopped (and no bigger leaks have started…) then your job is done here.  Use some bathroom specific sealant and call it a day.

Bonus:  Where I Went Wrong With Bathtub Repair

With the cartridge replaced I turned the camera off and did something stupid.  I decided to remove the tub spout.  I wanted to check the O-ring and clean the build up off.   Tub spouts come off by removing a stop screw on the bottom and pulling it straight off or by twisting it off.  I had the twist off variety. 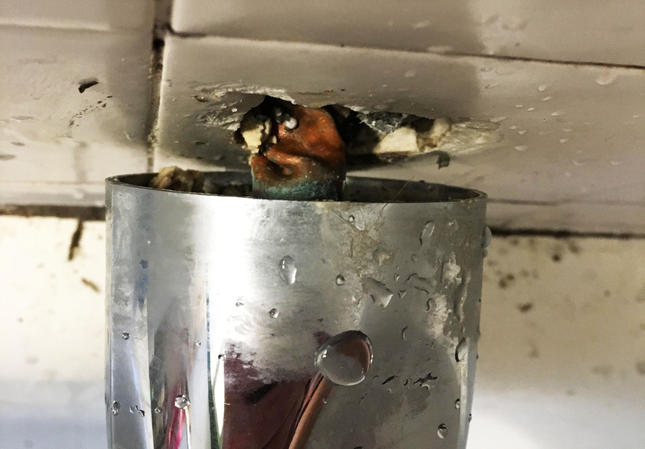 So I started twisting… and twisting… and twisting… with no real movement away from the wall, just a spinning spout.  And then… there was a slight give and the copper pipe was exposed from the wall…  I had twisted the cheap copper pipe into what looked like spiral pasta.  *&#$#~!!!  I immediately stopped what I was doing and debated whether I wanted to cut the pipe and install a new one or call a professional.  I opted for calling a professional.

Unfortunately, we had a run of sub-freezing temperatures for the last week and pipes had been bursting all over the city.  It took me four different plumbers before I finally had one that could come within 24 hours.  He fixed my screw up in an hour.  Per the plumber, it turned out someone had welded the pipe end to the tub spout… so it wasn’t entirely my fault.