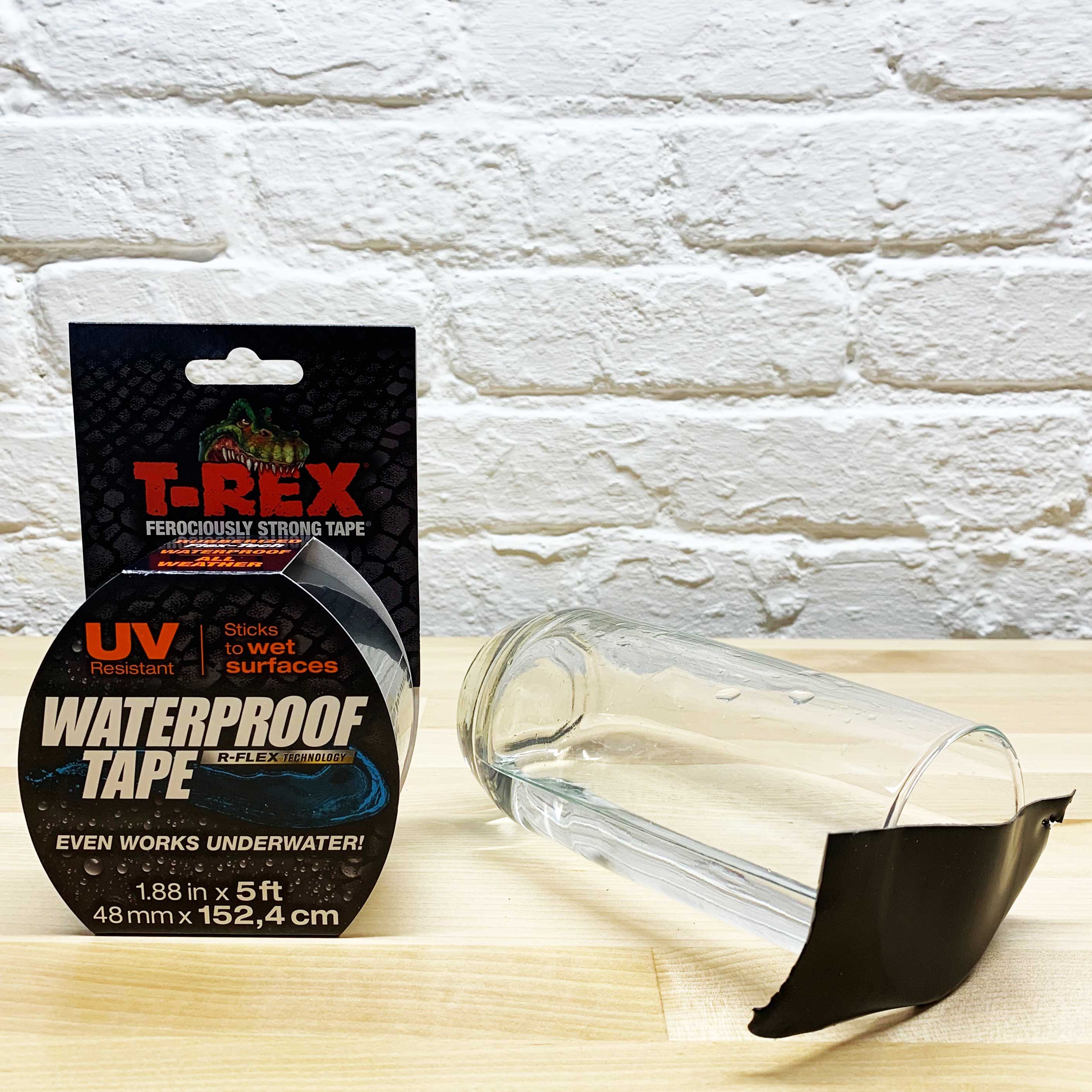 It’s been one of the rainiest years in decades and it seems like it’s never going to let up. What can you do when the rain keeps falling and the things that are supposed to keep the water out of your home decide to tap out? Check out these quick Waterproof DIY Hacks using T-Rex Waterproof Tape!

This post is part of a year long series of DIY Hacks Sponsored by the Ferociously Strong T-Rex Tape. Different tapes for different jobs! Keep up with these ongoing tips!

If you’ve been following along with the Laundry Room Makeover you’ll know that we’ve had some major issues with water getting into our basement. Part of the reason had to do with our old gutters. Some of it with poor drainage. Most of it has to do with living in an old home. However, that doesn’t we just let the elements win.

Ready to have your mind blown? T-Rex Waterproof tape uses R-Flex technology which is a fancy way for saying it’s really strong, has a waterproof adhesive and can withstand extreme temperatures. So what does that mean? You can actually apply this tape to temporarily fix an issue underwater! It can also stretch up to up to 700% of it’s original length and can handle temperatures of -70 up to 200 degrees Fahrenheit.

The rain and temperature swings (polar vortex!!!) have been so bad recently that even our gutters partially quit on us. The workload caused the end caps on the gutters to fail and leak water around what used to be soldered seams. It’s not a permanent repair that I can really perform under wet conditions so now what?

Even with plenty of debris and water flowing, a few strips of T-Rex Waterproof tape was strong enough to temporarily fix the problem. Sure, that’s a mildly sufficient patch job… but when the rain is coming down, you’re on a ladder and extra water is seeping into your foundation you do what you can. Yet several days and multiple down pours later the T-Rex Waterproof tape is still in place holding.

While I was up on the ladder I noticed the rubber roof over our porch has also seen better days… But also, some of the seams were starting to buckle after years of heat from the sun and elements taking their toll.

Once again, this is a repair that’s going to need some serious professional attention and not from me in a storm. Rubber roof… meet T-Rex Tape! I will say again this isn’t meant to be a permanent repair… but I feel pretty good about this one lasting for a while. With the temperature range the Waterproof tape can endure… this “temporary” patch might outlast the roof.

Down But Not Out

Maybe I shouldn’t have run it over with the lawnmower or maybe I shouldn’t be too cheap to replace it… But our downspout extension has seen better days. Water should flow away from the house when it rains… not leak near the mouth of the extension because of a giant hole.

A quick patch job with T-Rex Waterproof tape and this downspout extension has new life! Again… I should probably spend the $10 to replace it… but really… it was still 85% sort of okay!

I’ll admit, these DIY Hacks aren’t pretty. I didn’t show you how to magically clean a bathtub with a household product (this time). Let’s be honest though, if you’re using a product that can be applied in extreme conditions then the issues you’re solving with it aren’t going to be fru fru pretty either. You’ll be impressed with how durable it feels right out of the packaging (you can’t tear it!) and even more impressed after you put it to use!

*This post is sponsored by T-Rex Tape in an ongoing partnership as part of Team T-Rex! I have been compensated for my time and provided with product in exchange for my opinion. My opinion is my own.