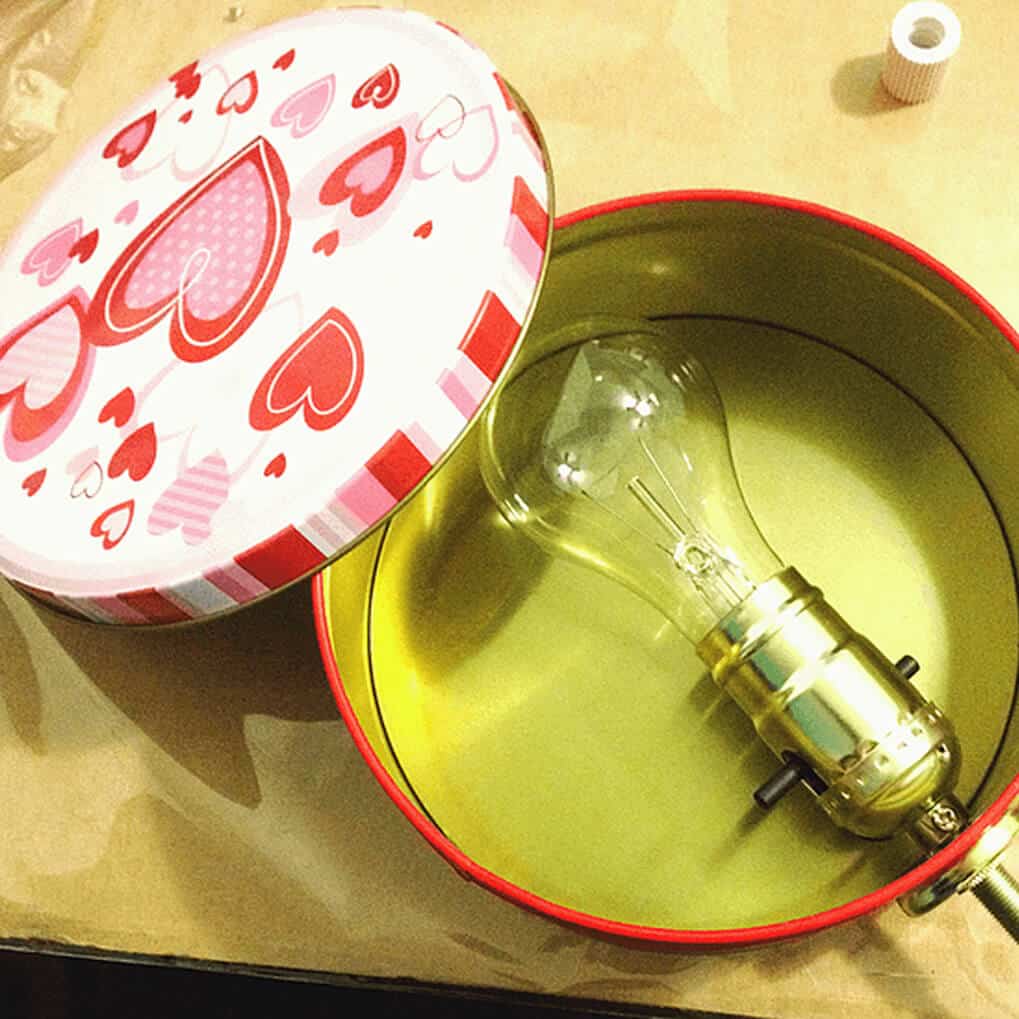 When the ladies finally moved into the chicken coop, it was late in the fall.  They had acclimated to the temperature changes and luckily we had a very mild winter.  Then spring starts to roll around and all the sudden we’re getting warnings for arctic vortexes.  What the heck is an arctic vortex?  I imagined a giant ice cloud that left things frozen solid in it’s wake.  That wasn’t too far from the truth.  My coop was not built for sub zero temperatures and honestly nor were the chickens (sort of).

But first, let’s talk cold turkey… err chicken.  Most breeds of chickens are fairly cold hardy.  Just because I think it’s cold outside doesn’t necessarily mean they care.  They actually come with their own down jackets (do not ever put a chicken sweater on your chicken).  The chickens will huddle together and puff up really big to help insulate.  They actually give off the same amount of heat as a light bulb, so a well built coop will heat itself.  Chickens have lived outside for centuries though, just because these are city chickens doesn’t mean they are like one of those dogs that gets pushed around in a baby stroller.

What does not fare very well though is their water.  The colder the temperatures the more your chickens are going to drink.  While enjoying a nice cold glass of water might be refreshing, a waterer frozen solid is not exactly what the are looking for.  So you can run outside every few hours and replace their block of ice or you can embrace your inner MacGyver for a temporary solution. 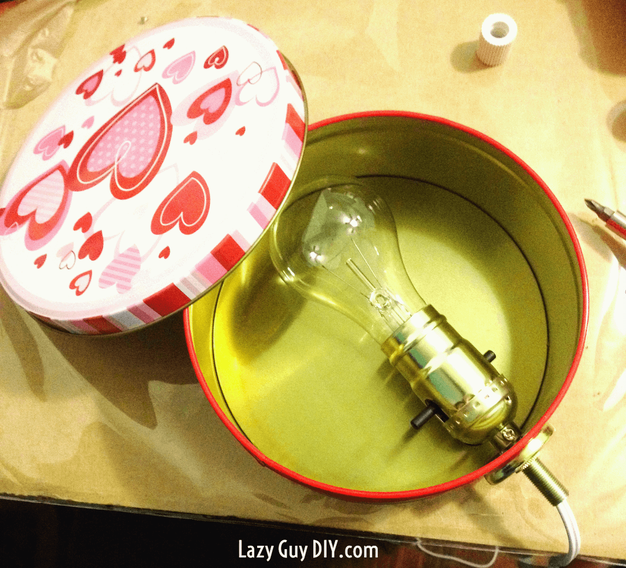 For only a few dollars and a couple minutes, you can pick up a light bulb and a metal cookie tin at the Dollar store and a lamp kit at your local hardware store.  Then, because electricity and water aren’t the best of friends, tape your edges with waterproof tape.  Then you can set your waterer right on top and keep the water from freezing.  I say, set it on top, but I taped it to the top of the tin.  Because once again… chickens knock everything over.  I also screwed the tin down to the the bottom of the coop.  So the whole thing was staying put.

I want to reiterate that this in my opinion is a temporary solution.  This was a last minute fix for weather we hadn’t planned on. 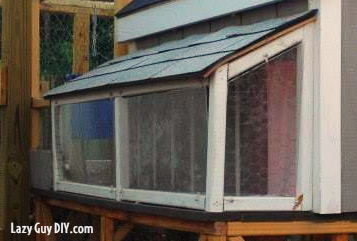 First off, let’s address the elephant in the room here… ugh… the craftsmanship of that roof… I just want to rip it off.

Ok, moving on, the problem with a screen door on a submarine is that it lets water in.  The problem with a screened in porch in a chicken coop is that it lets way too much air into the coop, especially in the wind tunnel that is the location where we have the coop.  So I came up with a simple solution of “storm windows”.  I went to my local Home Depot and purchased a sheet of Acrylic that I could cut down to size.  Score it a few times with a sharp blade and a straight edge and you should be able to easily cut to size.  Then I used a few screen fasteners to hold them in place. Screened in porch… you’ve been winterized.

Remember the heat lamp you used for your brooding chicks?  Fear not… you can use it again, but I really need to offer my warning to use extreme caution.  Flapping wings, hot lamps, flammable bedding… not the most ideal of situations, even if it is a house full of ladies with a red light glowing.  The first night I used the lamp in the coop I kept envisioning it bursting into flames.  Our lamp does have a cage on it and rather than relying on the clamp on the lamp (sweet rhymes Lazy Guy), I mounted the lamp to the roof.  There’s enough space that I’m really not concerned about the ladies crashing into it or getting too hot.

It’s also worth mentioning that if you put a light in your coop, you absolutely need to use a red light.   Chickens lay eggs on a schedule revolving around daylight.  So in the winter months, their egg production slows down to almost nothing.  When you introduce a bright light to the coop that runs all night, you throw off that system and they’ll start producing again.  That might sound like a positive thing, but it’s not.  Your hens have a limited number of eggs they can produce in a lifetime.  If you jump start their production in the winter months, then you’re cutting down on their long term years of production.  Not to mention, the real reason why they use red lights in “cat-houses” in Amsterdam and chickens coops is because it actually cuts down on feather plucking and fights between rival madaams.

So those were the scrambling fixes I used for my first winter of coop’dom.  Crude, but effective. The ladies survived unharmed.  Amazingly.  However, I’ve learned a few more tricks since I’d like to share.

When cold weather hits, I used to constantly watch the outside temperature to see when I needed to turn on the cold weather gear.  Which meant going back outside in the evening to switch everything on once we hit the threshold of freezing.  The horror…

Then I found a Thermostat Controlled Outlet on Amazon.  Plug this thing into an outdoor socket and it automatically kicks on when the temperature drops below 35 degrees and remains on until the temperature rises.  Brilliant!  I plug my heat lamp into that and also…

A Heated Water bowl from Amazon!  Gone are the days of a light bulb sitting on top of a cookie tin.  The whole electric and water thing really stressed me out, so purchasing a product that’s specifically made for holding and heating water that I didn’t make out of $5 worth of parts was a little more comforting.

I’ve been using this set up for several years now with zero issues.  Plan ahead and this is the way to go.  Wait till the last minute… and use the advise above at your own risk.