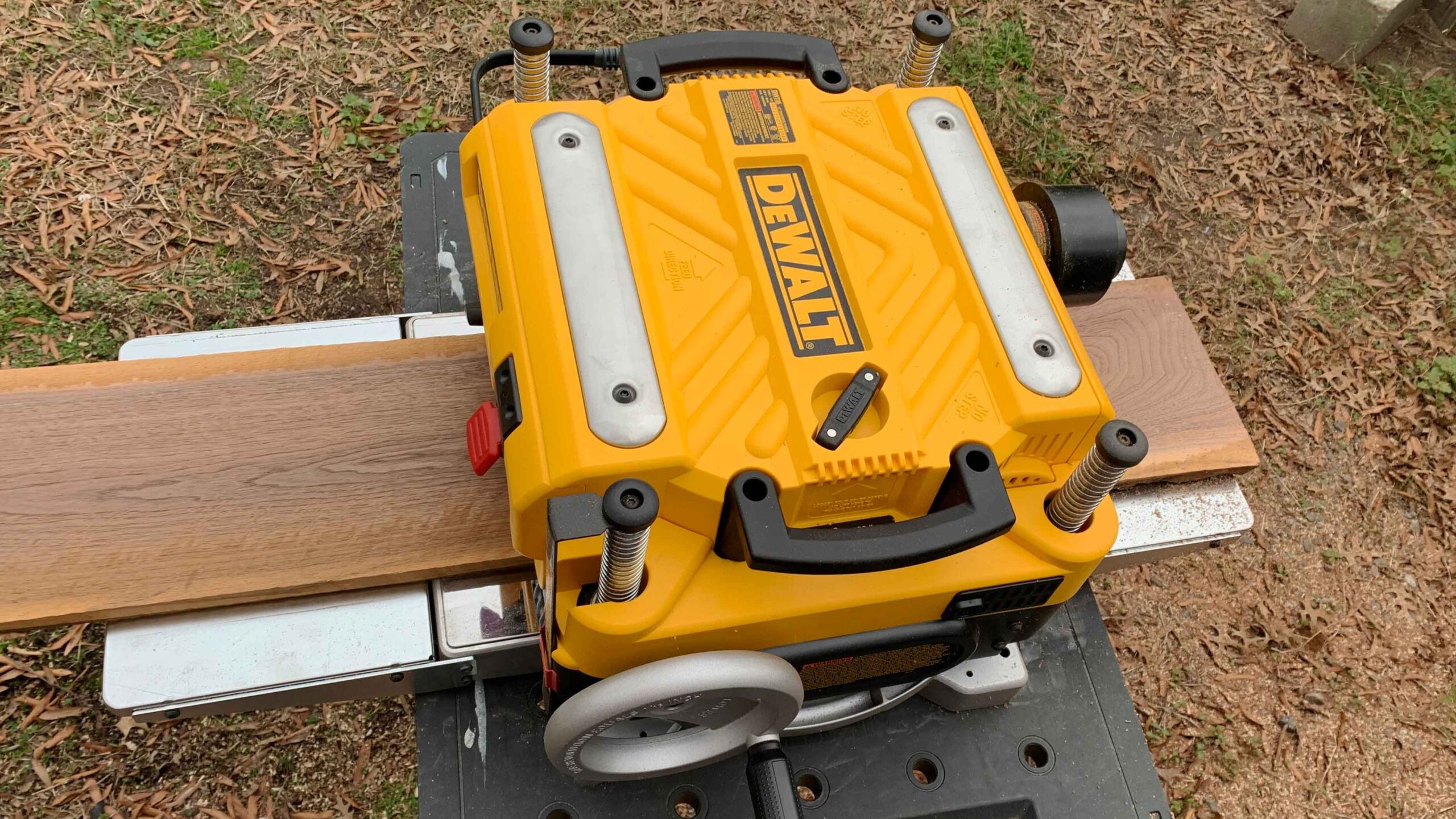 Long ago in a garage far far away I had a woodshop with mainly orange brand tools. From table saw, to sliding miter, to jointer and then of course… the spindle sander. No wait… the lunchbox thickness planer (although I still love that spindle sander)! At a price point between $300 to $400, a lunch box planer is one of those tool purchases that’s not quite a beginner woodworker purchase, but also not a several thousand dollar tool investment. Before you pull the trigger and buy a lunchbox planer with that hard earned money… consider waiting a little longer and saving to buy the DeWALT DW735 instead.

More Money Gets You What?

With a 13″ wide by 6″ thick cutting range, you’re going to find similar stats across the board (no pun intended) with competing benchtop planer capacity. So wait… I’m telling you to spend up to $200 more on a woodworking tool that’s been on the market for several years and doesn’t give you any additional cutting capacity?? Don’t worry, I’m also going to tell you that you should spend the extra money and then spend even more later on upgrades.

What you do get, though, is a high quality machine that has a design that reduces snipe and gives you a smoother cut for starters. It also comes with a blower that clears debris better than most dust collectors can handle on their own. Not to mention blade/knife changes are easier on this unit than any other machine in its class. But… you’re going to need that feature. More on that in a minute.

Okay, let’s talk the blades/knives. Your DeWALT DW735 comes with them already installed and then when it’s time to replace them… surprise! You have one more use because they’re reversible. But when it’s time to replace them, you can pick up a double pack (6 blades) of the DeWALT 13″ Planer knives for under $80. But because this planer cuts so smoothly at both speed settings it can seem like you’re burning through blades very quickly. To be clear, this isn’t a flaw. This is how your planer runs at peak performance. So stock up on blades and be prepared to swap out after a few projects.

But… there’s an alternative. The DeWALT DW735 and DW735X have the ability to swap out the cutter head with an aftermarket spiral cut helical shearing head. What’s that mean? You get 40 individual carbide tipped blades that spiral around the cutter head. Each carbide tip has 4 individual blades you can spin if you happen to chip a blade or they dull out on you. That also means you can replace one of 40 blades in a swap, not all 3 of the traditional blades because of the spiral pattern. The helical heads also run quieter, cut cleaner and have a much longer cutting life. But there’s a catch. A helical head will run you over $400. Ouch.

So let’s be very clear here. The DeWALT DW735 Thickness planer is already a significant upgrade over the other field of lunchbox planers and worth the extra investment. But that’s not the point. If you know anything about Tuner Cars or saw one of the Fast & Furious movies, you’ll know what I mean. Take a specific factory car like a Toyota Supra, add a few aftermarket parts and you can get performance better than a several hundred thousand dollar sports car like a Ferrari at a fraction of the price.

And that’s what I’m telling you here. Take the DeWALT DW735 and pair it with a helical head cutter and you’re spending around $800-$900. That’s a high quality piece of woodworking equipment. Plus it’s still a very portable, bench top planer. Or you can grab a Jet or Powermatic planer with a 13″ or 15″ capacity that are stationary and start at around $2,000 and can run up to $5,000. You do the math.

*This post is part of The Home Depot Pro-Spective Tool Review Program. I’ve been provided with tools and compensated for my time and opinion. My opinion is my own.

Great article. Made me pull the trigger on DW735… Having trouble finding helical cutter head though. Any recs?

Great to hear! And supply chain issues have been terrible recently for the helical cutter head. Shelix will ship from Canada at a price and looks like Byrd Tool has them in stock as well.

Look for a Lux cutterhead. They ship faster have some superior features and may even be cheaper than the Shelix.

Mywoodcutters.com carries both Shelix and LuxcutIII heads for most every planer and jointer ever made.

Shop vacuum filter can fit right to the top of a cyclone separator.

I ended up purchasing the 735 a while back after reading your review. I lucked into the last bundle Rockler had that included the extra knives and a stand. I work inside my garage so the dust collection was an issue for me. I tried a few different methods but finally found one that worked (picture attached) using a cyclone separator mounted to a barrel. The whole setup is here. One thing I’ll note is how easy the blades seem to nick up leaving a small raised line in my stock. After a month, I’ve already flipped one blade around… Read more » 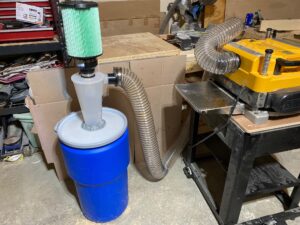